Swiatek set to become the new WTA World No.1 when rankings are released on Monday, April 4
Historical achievement as the first Polish man or woman to reach the top ranking in singles

ST. PETERSBURG, FL, USA – The WTA announced today that Poland’s Iga Swiatek will become the new WTA World No.1 when the rankings are released on Monday, April 4 following the Miami Open presented by Itaú, becoming the first man or woman from Poland to ascend to the No.1 position in singles. She will become the 28th woman to capture the WTA World No.1 ranking. 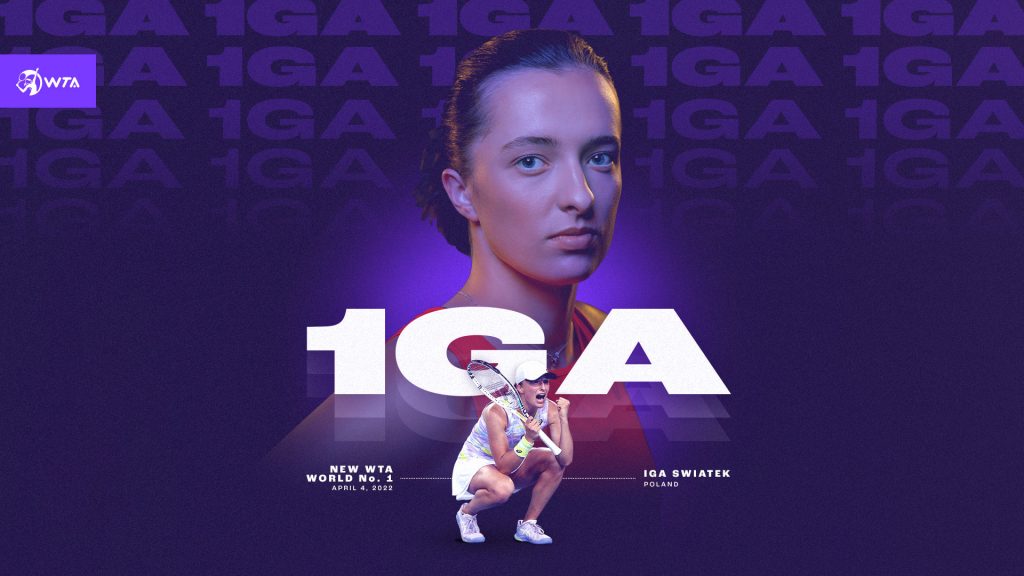 At 20 years, 308 days of age, Swiatek will become the youngest player to make the WTA World No.1 debut since Caroline Wozniacki did so in 2010, aged 20 years and 92 days.

“I am really satisfied and proud of myself for reaching the No.1 spot,” stated Iga. “I feel like my tennis is going the right way and my goal is to stay at No.1 and continue what I am doing.” On the impact she is making in Poland, Swiatek said, “Polish fans continue to grow more and more passionate about tennis. It is amazing to see and one of my goals is to make tennis more popular in Poland and I hope this will help grow the game. The support from home and all around the world has been great.”

“Iga is an incredible player with an all-around athleticism and unique shot-making ability, and I am delighted she will become the new WTA World No.1 ranked player,” said Steve Simon, WTA Chairman and CEO. “To achieve all that she has at such a young age and reach the pinnacle of the WTA rankings is a true testament to her hard work and professionalism. I am pleased to congratulate Iga on this very special moment and achievement.”

With the announcement of current WTA World No.1 Ashleigh Barty retiring from the sport earlier this week, Swiatek has now secured her rise to the elite ranking position with her win today over Viktorija Golubic in the second round at Miami. Her victory over Golubic was her 12th match win in a row as she advances in Miami.

Swiatek started the season in excellent form, reaching the semifinal stage at her first two events– Adelaide International, a WTA 500 level event, and the Australian Open – marking a continuation of her success across 2021, when she picked up the title at the Internazionali BNL d’Italia in Rome and qualified for the season-ending WTA Finals for the first time in her career.

In 2022, Swiatek has captured back-to-back WTA 1000 titles at the Qatar TotalEngergies Open in Doha and the BNP Paribas Open in Indian Wells.

Swiatek first rose to prominence after winning the title at Roland-Garros in 2020 without dropping a set, and at No.54 became the lowest-ranked Roland-Garros champion since rankings were introduced in 1975. Her success in Paris also saw her become the first Polish player (man or woman) to win a Grand Slam singles title and was subsequently voted as the WTA Most Improved Player at the end of the 2020 season.

Click here to read more on Swiatek’s rise to the WTA World No.1 singles ranking.