The racket of choice for Stan Wawrinka, Frances Tiafoe, Hyeon Chung and Pierre-Hugues Herbert, the all-new Yonex VCORE Pro 97 is about as user friendly of a racket as a player could hope for.

Featured in a great dark green and gold color pallet, the VCORE 97 Pro (310g) provided the head flex and all the power that would be needed for a baseline or net player.

Highlighted with Namd technology, which is a uniquely flexible carbon material used in strategic locations to optimize the response of the frame, the VCORE Pro 97 plays much larger that its 97 sq inch head size. Due in large part to the unique 16×19 string pattern, the VCORE Pro 97 provided ample power from the baseline and was equally as impressive at the net. 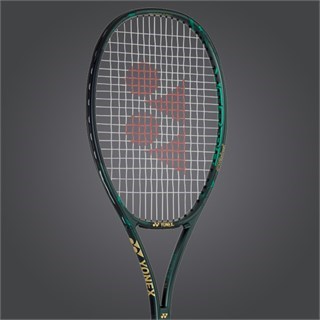 Strung up with with Yonex Poly Tour Strike (Denis Shapovalov’s string), the VCORE Pro 97 was more than spin friendly on slice and topspin serves as it was when we tried to flatten out a first serve. Yonex frames have always been more on the flexible side compared with other top manufacturers, and in a way that has set them apart from the competition. Providing high quality flexible frames that do not sacrifice power, the VCORE Pro 97 in 310g is a must try for players that love to open up the court and hit the ball off-the-rise.

The VCORE Pro 97 310g is built on the handle heavy side, so players that like a more even weighed frame would want to consider adding some lead tape to the head of the racket. That aside, when merged with the Yonex Grap grip, the VCORE Pro 97 does in many ways feel like an extension of the player’s arm. 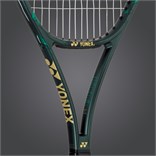 To demo or purchase the all-new Yonex VCORE Pro 97 310g and or the rest of the series, checkout the following stores below.