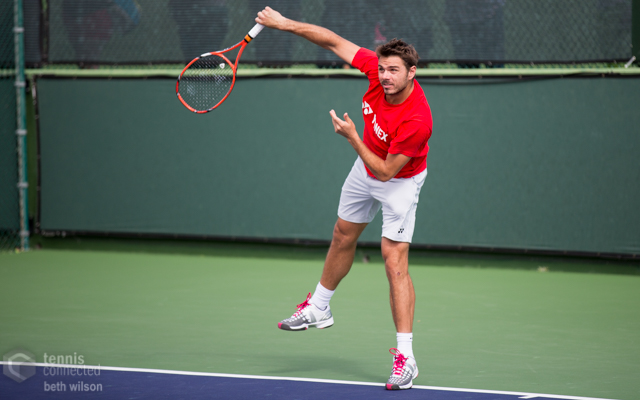 The Williams sisters will meet in a blockbuster quarter-final on Tuesday, after both sisters recorded straight sets wins on Day 7 of the tournament.

Top seed Serena Williams produced her best performance of the tournament to date, striking 18 winners against just six unforced errors as she saw off rising star Madison Keys, 6-3 6-3. Elder sister Venus was similarly impressive in making her way through to the US Open quarter-finals for the first time in five years, losing just three games for the match against the Estonian Anett Kontaveit.

There was disappointing news for Eugenie Bouchard and her legion of fans on Day 7, with the Canadian forced to withdraw from the women’s singles after suffering a fall and concussion on Saturday. Roberta Vinci was the immediate beneficiary of Bouchard’s bad luck, the Italian claiming a walkover to advance to the quarter-finals. Vinci will play the winner of the fourth round clash between Kristina Mladenovic and Ekaterina Makarova.

In the men’s tournament, defending champion Marin Cilic moved through to the quarter-finals on Day 7, the Croat claiming a pivotal third set tiebreaker over Jeremy Chardy before easily claiming the fourth set to collect the win. Cilic will face Frenchman Jo-Wilfried Tsonga for a place in the semi-finals, after the nineteenth seed ended compatriot Benoit Paire’s giant-killing run at Flushing Meadows with a straight sets win.

Fabio Fognini, conqueror of Rafael Nadal on Friday night, was unable to replicate such form against Nadal’s countryman Feliciano Lopez, going down to the eighteenth seed in straight sets. Serving and volleying at every opportunity, Lopez refused to let Fognini dictate play from the baseline, the Spaniard wrapping up the match in one hour and 50 minutes. To earn a place in the semi-finals, Lopez will need to beat the winner of the Djokovic-Bautista Agut fourth round contest.

Second seed Roger Federer has steamrolled everything in his path in his opening three matches, but John Isner’s incredible serve means that the American won’t be a pushover in this contest. The thirteenth seed was well on top of Vesely before the Czech retired in their third round contest, and with plenty of home crowd support on his side, I expect Isner to put up a good fight in this match.

Federer looks like he has never aged, the Swiss superstar serving flawlessly, volleying crisply and hitting his forehand with as much confidence as ever. The veteran will know that he needs to take his chances on Isner’s serve, so look for Federer to peak at the business end of each set as he squeezes out a tight straight sets win. Federer in 3.

Former Wimbledon finalist Sabine Lisicki has struggled to replicate her impressive performances at the All England Club at the other majors, so it’s pleasing to see the injury prone German make it through to the round of 16 in New York this year. The twenty-fourth seed has a booming serve, which keeps her in plenty of matches, but she will need more than her serve if she is to beat second seed Simona Halep today.

Halep hasn’t had as good a year as last year, but the 2014 French Open finalist has started the tournament in New York in tremendous form and will fancy her chances of making the final in what is becoming a fairly weak bottom half of the draw. The Romanian is a terrific mover around the court and should be able to move Lisicki out of position time and time again. Look for Lisicki to fight hard but for Halep to have all the answers. Halep in 3.

Donald Young Jr. could be described as the comeback kid for multiple reasons. The former teen prodigy has spent many years in the wilderness struggling to live up to expectations, whilst his heroics in coming back from 2 sets to love down against both Gilles Simon and Viktor Troicki have made him a darling of the New York crowd.

Does Young have anything left in the tank to challenge fifth seed Stan Wawrinka today? It’s a good question, with the French Open champion being a very hard man to beat on the bouncy hard-courts of Flushing Meadows even when one is full of energy. I think Young will give it his all, but I expect Wawrinka to be too strong and too fit for the American in this clash. Wawrinka in 4.

Twelfth seed Richard Gasquet was in top form in defeating Bernard Tomic in round 3, but the Frenchman faces a stiff challenge in the form of Tomas Berdych today. Although the pair has split 12 career meetings, the Czech has claimed the last three matches between the pair, and I think Gasquet will find it hard to match Berdych’s power from the baseline.

Both of these players have made it to the US Open semi-finals before, so neither will be fazed by the occasion. For Gasquet to win, he needs to serve extremely well and go for broke off his backhand wing. If he is on song, he is well and truly capable of causing an upset. But if he isn’t firing on all cylinders, I think Berdych will be too strong for the Frenchman. Berdych in 4.

Having overcome the feisty former French Open finalist Sara Errani in the third round, former champion Sam Stosur must defeat another Italian in the form of twenty-sixth seed Flavia Pennetta if the Aussie is to return to the US Open quarter-finals. Stosur exorcised some demons in outlasting Errani in 3 sets, after the Italian upset Stosur in the French Open semi-finals in 2012, and now the 2011 US Open champion will be desperate to see how far she can progress in this year’s tournament.

Pennetta is a talented all-court player who has just as much experience as Stosur. I don’t think much separates the players, but Stosur is the heavier hitter and has the better serve. For these reasons, I’ll back the Aussie to make it through to the quarter-finals.