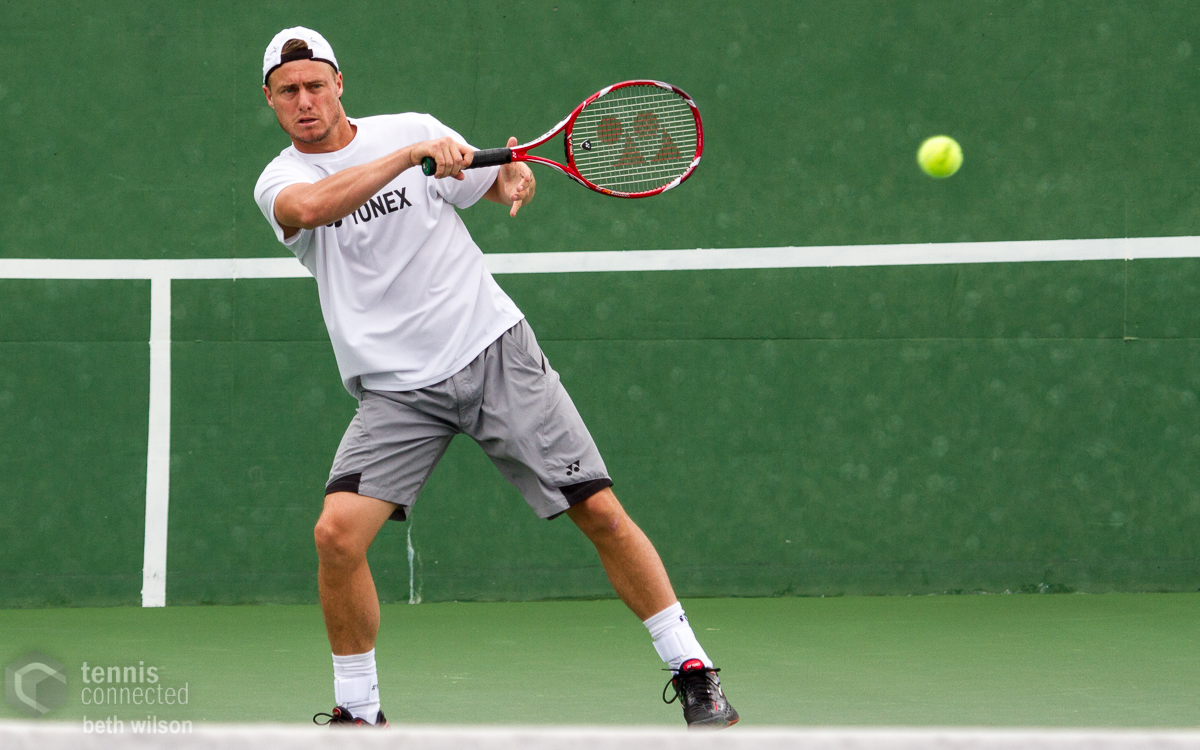 Mardy Fish bid farewell to the US Open on Day 3, the American veteran going down to Spanish seed Feliciano Lopez in a pulsating 5-setter in his final match at Flushing Meadows.

Fish put up a brave fight before succumbing to Lopez, taking a 2 sets to 1 lead and then serving for the match in the fourth set. Unfortunately for Fish and his legion of fans, he was unable to finish it off, allowing Lopez to claim victory in 5 sets.

Lopez was joined in the round of 32 by compatriots Rafael Nadal, Tommy Robredo and David Ferrer but another Spaniard, Marcel Granollers, went down to French seed Jo-Wilfried Tsonga. Top seed Novak Djokovic cruised to a straights sets win in the night session, whilst defending champion Marin Cilic also recorded a straight sets win.

Milos Raonic survived a tight 4-setter against Fernando Verdasco, but Bulgarian seed Grigor Dimitrov wasn’t so lucky, losing to Kazakh Mikhail Kukushkin in 5 sets to continue his recent run of poor form. There was better news for seeds Goffin, Chardy and Fognini, all of whom progressed to the third round on Day 3.

In the women’s tournament, top seed Serena Williams put in a scrappy performance but ultimately prevailed against Kiki Bertens in straight sets, whilst sister Venus overcame compatriot Irina Falconi in 3 sets. Eugenie Bouchard and Belinda Bencic also needed 3 sets to advance to round 3, as fellow seeds Svitolina, Makarova, Keys and Radwanska recorded straight sets victories. Russian Anastasia Pavlyuchenkova was the day’s biggest casualty on the women’s side, the seed going down to Estonian Anett Kontaveit.

Former world number one Victoria Azarenka is a two-time finalist at Flushing Meadows, losing both finals to Serena Williams in tight affairs. The Belarusian loves the raucous atmosphere in New York and the court conditions suit her game perfectly. Although she is seeded just 20 due to an injury-interrupted season, I think she has the ability to make a deep run at this year’s tournament.

Wickmayer is a talented athlete who burst into the spotlight with a run to the US Open semi-finals in 2009. Unfortunately for the Belgian, she hasn’t been able to replicate that sort of form in recent years, with her world ranking now languishing at 92. Look for Wickmayer to compete strongly but for Azarenka to dictate play from the baseline. Azarenka in 2.

This all-Australian clash is a particularly intriguing battle, pitting former champion Hewitt, playing in his fifteenth and final US Open, against the mercurial Bernard Tomic. The twenty-fourth seeded Tomic has been around for what seems like forever, but is still just 22 years old. Tomic seems to be forever getting himself into strife off the court, but the former Wimbledon quarter-finalist has been very consistent on court this year and is up to a career high 24 in the world rankings.

Davis Cup hero Hewitt is incredibly well-respected amongst his fellow Australian players, and so I think the biggest test for Tomic today is whether he can put aside Hewitt’s status and aura and concentrate fully on getting the win. Hewitt has more experience dealing with these sorts of situations and will be desperate to do well in his last visit to Flushing Meadows. I’ll back the veteran to oust his younger compatriot. Hewitt in 5.

John Isner is one of the best local hopes for success at Flushing Meadows but, after a run to the quarter-finals in 2011, the big-serving American has been unable to make it past the round of 32 in New York.

Veteran Mikhail Youzhny has achieved his best Grand Slam results in New York, reaching the semi-finals in 2006 and again in 2010. However, the Russian’s form has fallen away in recent years and he is yet to win a Grand Slam main draw match this year. Look for Isner to dominate on serve and ride the crowd support to victory. Isner in 4.

Sixth seed Tomas Berdych was looking very dangerous in New York last year until he ran into a red-hot Marin Cilic in the quarter-finals. As with Cilic, the fast-paced, bouncy courts at Flushing Meadows suit Berdych’s game to a tee, and I think the Czech star can do well in New York this year.

Austrian Melzer is a veteran of the ATP Tour and is a former top 10 player and French Open semi-finalist. Melzer now sits outside the world’s top 100 and, despite the ability for his tricky left-handed serve to gain him a considerable number of free points, I think he will be unable to match Berdych from the back of the court. Berdych in 4.

Andy Murray did well to put aside the hype surrounding his opening round match with Nick Kyrgios and focus on progressing to the second round, which he achieved without too much trouble. Murray faces another tricky opponent today in the form of Adrian Mannarino. The Frenchman made it through to the round of 16 at Wimbledon in 2013 and, at 35 in the world rankings, was unlucky to miss out on being seeded in New York this year.

Mannarino has a good left-handed serve, but Murray is one of the best returners on the ATP Tour and I think the Scot will be able to effectively neutralise the Frenchman’s biggest weapon and control the majority of the points from the baseline. Murray in 3.

Put your house on: Roger Federer. His opponent today, Belgian Steve Darcis, did beat Rafael Nadal at Wimbledon in 2013, but I don’t think he’ll be able to cause the same sorts of problems for Federer today.

Upset alert: Camila Giorgi upset Caroline Wozniacki in New York in 2013 en route to the round of 16, and I think the Italian has the ability to upset twenty-fourth seed Sabine Lisicki today.

Likely to go the distance: I’m predicting that the Petkovic-Vesnina clash and the Haase-Gasquet encounter will both go to deciding sets, with the seeds Petkovic and Gasquet eventually prevailing.

Welcome to the Australian Open, how ready are you to play tennis?