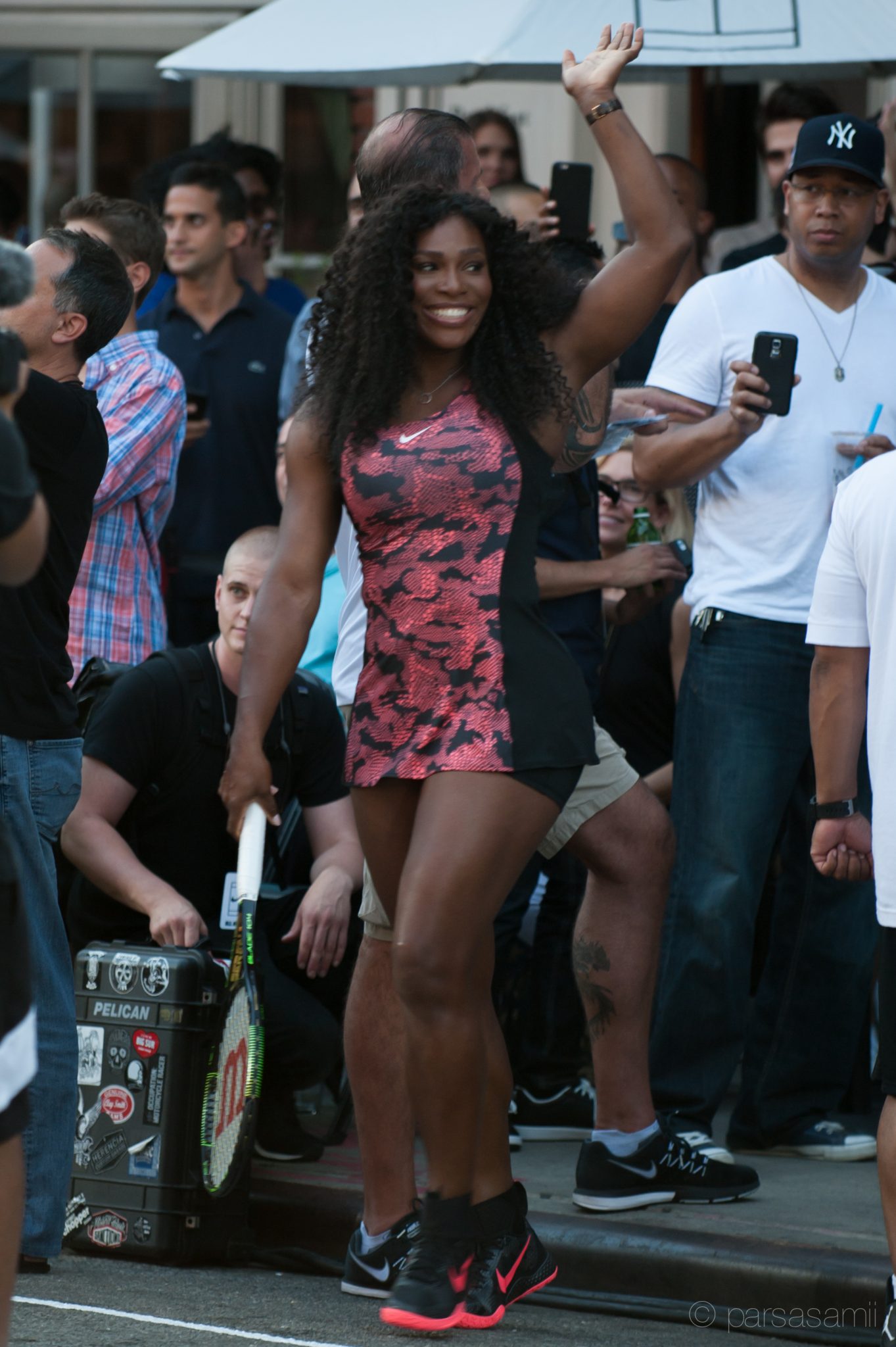 It’s summer in New York, which means it’s time for the final Grand Slam of the year, the US Open from Flushing Meadows. Welcome to a fortnight of daily coverage of all the action. Today sees me set out my respective predictions for the men’s and women’s tournaments, along with my previews of the best matches taking place on Monday.

World number one Novak Djokovic enters the year’s final major as the firm favourite, having already claimed two of the year’s first three Grand Slams. However, in recent weeks the Serb has shown he is human, going down to Andy Murray in the Montreal final and to Roger Federer in the Cincinnati final. To my mind, the Serb is trying to avoid peaking too early, unlike last year when an exhausted Djokovic was outhustled by Kei Nishikori in a warm and windy semi-final at Flushing Meadows.

Djokovic is scheduled to face great rival Rafael Nadal in the quarter-finals and Nishikori in the semi-finals. I think Nadal isn’t confident enough right now to challenge the top seed, and I expect Djokovic will relish turning the tables on Nishikori if they do end up squaring off in the semi-finals once again.

In the bottom half of the draw, I expect Roger Federer’s renaissance will continue. After Wimbledon, New York represents his best chance to win another major and, with all facets of his game working extremely well right now, I think he will be too good for likely opponent Berdych in the quarter-finals. Andy Murray should progress past Stan Wawrinka and into another US Open semi-final, but if the Swiss star serves as well as he did in Cincinnati, then I think Federer will be too strong for the Scot.

Serena Williams’ biggest opponents right now are the history books. The American superstar has won the last three US Opens and the last four Grand Slams, and is now just seven wins away from completing the first calendar Grand Slam since Steffi Graf achieved the feat in 1988.

There are some dangerous players lurking in Williams’ quarter of the draw, including Sloane Stephens, Williams’ sister Venus, rising star Madison Keys and young Swiss star Belinda Bencic. But I can’t see any of them beating Serena in New York unless the top seed totally loses her way or is troubled by the elbow ailment that has affected her at various points during the year. I expect former champion Maria Sharapova to make her way through to the semi-finals but, as so often is the case for the Russian, her quest for the championship will most likely be thwarted by Williams.

In the bottom half of the draw, former finalists Caroline Wozniacki and Victoria Azarenka are among the biggest contenders, along with 2011 champion Sam Stosur and Germans Andrea Petkovic and Angelique Kerber. Azarenka is still working her way back to top form, but she loves the fast-bouncing courts at Flushing Meadows and I wouldn’t be surprised to see the twentieth seed make a spirited run through to the women’s final.

This should be a particularly good contest, pitting the former French Open champion and world number one Ana Ivanovic against the plucky Slovak, Dominika Cibulkova. Ivanovic is the better-known and more high-profile of the players but, as far as opening round contests go, this is a tough test for the Serbian star, with Cibulkova being a former Australian Open finalist and top 10 player.

Cibulkova has had an injury-interrupted season and now languishes at number 58 in the world rankings, but if she can stay injury-free then I don’t think it will be long before she reclaims a spot in the world’s top 20. I’ll back the seventh seeded Ivanovic to ultimately prevail, but not without having to work extremely hard. Ivanovic in 3.

He might be just 18 years of age, but Borna Coric has already beaten the likes of Murray and Nadal and has rocketed up the rankings in the last twelve months. The US Open boys’ singles champion in 2013, Coric has a formidable backcourt game that has drawn comparisons with Novak Djokovic’s brand of baseline tennis.

Coric upset Nadal in Basel last year, triggering a premature conclusion to Nadal’s 2014 season. The Spaniard won’t be taking Coric lightly as a result and, whilst Nadal will be desperate to avenge the loss in Basel, he knows that Coric has the requisite self-belief to claim victory. Nadal is still a decent way from his best tennis, but I think he will rise to the occasion and overpower Coric in this one. Nadal in 4.

Nishikori had a breakout Grand Slam performance last year, making last year’s US Open final after defeating world number one Novak Djokovic in the semi-finals. Having now seen Djokovic conquer almost all before him since that loss to Nishikori, it makes one realise just what a fine performance it was from the Japanese star.

Nishikori couldn’t finish it off in the final in New York last year, going down to a red-hot Marin Cilic, but I think Nishikori is again among the top few contenders at Flushing Meadows this year. He will need to be switched-on against the dangerous Paire, a volatile Frenchman who is usually too erratic and temperamental for his own good, but who possesses an abundance of talent and a natural flair for the game. Look for Paire to show flashes of brilliance but for Nishikori to ultimately be too solid. Nishikori in 4.

Naturalised Aussie Daria Gavrilova is playing in her first US Open, but don’t expect the youngster to be overawed by the occasion. Gavrilova upset her idol Sharapova in Miami earlier this year and, whilst the five-time major winner subsequently turned the tables with a straight sets win on clay in Rome later in the year, Gavrilova’s hard-courts victory will give her confidence going into this clash.

The fact that Sharapova hasn’t played a competitive match since going down to Serena Williams in the Wimbledon semi-finals, in part due to a niggling leg complaint, also gives Gavrilova hope, as Sharapova will likely be rusty given her lack of match practice. That said, I think the Russian will be too composed on the big points for her younger opponent. Sharapova in 3.

Finnish veteran Jarkko Nieminen is retiring at the end of the year, and I’m sure the former top 20 player will want to finish on a high note in his last Grand Slam. The Finn showed that the competitive fire still burns within by outlasting fellow veteran Lleyton Hewitt in a long 5-setter at Wimbledon earlier this year, and I think the leftie will make life difficult for French seed Tsonga in this match.

The flamboyant Frenchman is always unpredictable and so far this year has mixed in some decidedly poor performances with a breath-taking run to the semi-finals in Paris. I think he will have enough firepower to see off a gallant Nieminen, but as far as the rest of the tournament is concerned, Tsonga’s chances are anyone’s guess. Tsonga in 4.

Put your house on: Serena Williams. If the American superstar fails in her quest to complete the calendar Grand Slam, it won’t be at the opening hurdle and it won’t happen against little-known Russian Vitalia Diatchenko.

Upset alert: Eugenie Bouchard now has former superstar Jimmy Connors assisting her in an informal capacity, but I don’t think that guarantees any immediate improvement in her form. It’s been a disastrous year to date for the Canadian, so watch for American Alison Riske to push Bouchard all the way in this one.

Likely to go the distance: Pencil in a long 3-setter in the all-American clash between twenty-ninth seed Sloane Stephens, who always seems to bring out her best tennis in the majors, and Coco Vandeweghe, who made it through to the quarter-finals at the All England Club earlier this year.

ATP Tour 2021: Schedule of Play for Sunday April 11 for Marbella and Sardegna