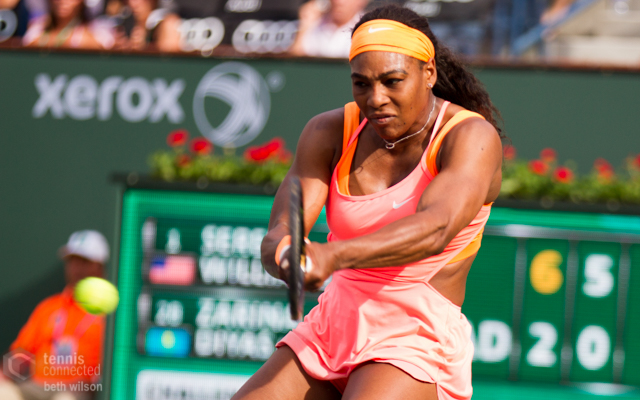 Day 11 in Paris saw nine-time champion Rafael Nadal suffer defeat at Roland Garros for just the second time in 72 career matches, the Spaniard getting no presents from world number one Novak Djokovic on what was his twenty-ninth birthday. Djokovic, who is now just two wins away from achieving a career Grand Slam, will face Andy Murray on Friday for a place in Sunday’s final.

In the most eagerly anticipated match of the tournament, top seed Djokovic exploded out of the blocks, breaking Nadal’s serve twice in succession to establish a commanding 4-0 lead. Unfazed, the Spaniard set about whittling away Djokovic’s lead, finding his rhythm from the baseline as he broke back twice and levelled the first set at 4-all. Down 5-6, and serving to take the first set into a tiebreaker, an errant smash by Nadal proved costly as Djokovic snatched the break and the first set, 7-5, after an absorbing 67 minutes of play.

The second set started off where the first set finished, with the players evenly matched through the first 6 games. But from midway through the second set, Djokovic began to dominate, dictating play from inside the baseline and exposing Nadal’s weaker backhand wing. The Spanish superstar could only garner one of the final 10 games for the match, as Djokovic eventually claimed a 7-5 6-3 6-1 victory, his first against Nadal at Roland Garros in 7 attempts.

Andy Murray will attempt to spoil’s Djokovic’s quest for the career Grand Slam on Friday after the Scot scored his first win over David Ferrer on clay. Murray’s unbeaten streak on the red dirt this year continued against the former French Open finalist, the third seed shrugging off the loss of a tight third set to close out the match in convincing style in the fourth set.

In the women’s tournament, top seed Serena Williams maintained her perfect record against Italian Sara Errani, the American conceding just 4 games for the match against the seventeenth seed and former French Open finalist. Unlike her previous 3 matches, Williams started strongly, collecting the first set 6-1, and whilst Errani battled gamely in the second set, the result was never really in doubt.

Williams will face twenty-third seed Timae Bacsinszky for a place in the final after the Swiss player defeated Belgian Alison Van Uytvanck in straight sets in what was a battle of the rank outsiders. See below for my thoughts on today’s Williams-Bacsinszky clash.

Today’s semi-finals appearance not only marks the first time since her victory at Roland Garros in 2008 that Ana Ivanovic has progressed to the final 4 in Paris, it also represents the first time since her French Open win that the Serb has made it through to the semi-finals of any Grand Slam. After claiming the title in Paris in 2008 and enjoying a brief stint as the world’s number one player, Ivanovic spent a considerable period in the wilderness, struggling to cope with the increased spotlight and added expectations that invariably come with being one of the sport’s superstars.

But the last couple of years have seen Ivanovic rebound strongly. The Serb has regained her fitness and her confidence, and has been slowly but surely improving her results on the sport’s biggest stages. This run in Paris, therefore, is a testament to her significant efforts to regenerate her career.

Safarova used to be known as a talented shot-maker who never quite had the consistency to be considered one of the sport’s leading players. But the Czech leftie has shown in the past year or two that she deserves to be ranked among the elite in the women’s game – a semi-finals appearance at Wimbledon last year and her run to the semi-finals here in Paris underscore that opinion.

To my mind, this match depends rather heavily on the conditions in Paris today.  In her past couple of matches, Safarova has handled the blustery conditions expertly and is a better wind player than her opponent. But in calm conditions I favour Ivanovic as the bigger and better ball-striker. Today’s forecast looks fine and hence I’m leaning towards the Serb. Ivanovic in 3.

After exhibiting some scratchy form early in the tournament, which saw her forced to come from a set down on 3 successive occasions, Serena Williams is now in the box seat to claim another Grand Slam singles title. Only 4 players remain in the tournament and, whilst Williams holds 19 majors to her name, the other 3 players collectively have won just one major (Ivanovic’s 2008 French Open triumph).

Quite often in major tournaments, Williams takes a while to produce her best tennis and this seems to be holding true in Paris this year. Hence the axiom heard in tennis circles: if there’s ever a time to beat Serena Williams, it is early on in a tournament. In other words, if Williams survives her early matches, she is usually unstoppable by the time she arrives at the pointy end of a tournament.

Bacsinszky’s tale is the feel-good story of the tournament, the Swiss player rebounding from a turbulent childhood featuring an oppressive father and coming back to the sport after an extended period out of the game to now reach the final 4 of a Grand Slam. Bacsinszky has beaten some high-quality opponents along the way, including two-time major winner Petra Kvitova, and didn’t wilt under the pressure of being heavily favoured going into her quarter-final. Williams will of course enter this match as the red-hot favourite but Bacsinszky has nothing to lose and has performed creditably in her two previous losses to Williams. I think the twenty-third seed will do well for one set, but look for the American to pull away in the second set. Williams in 2.