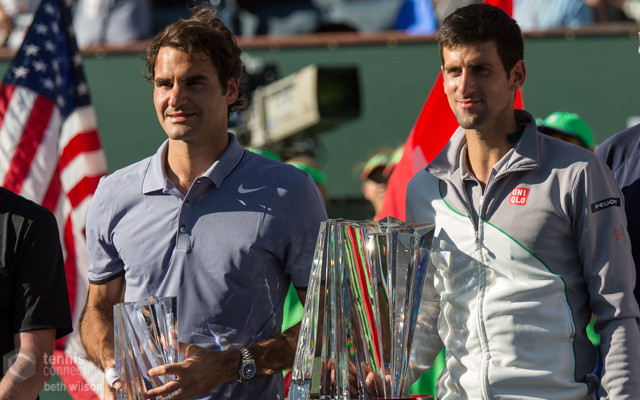 Top seeds Novak Djokovic and Roger Federer will meet in the final of the Dubai Duty Free Tennis Championships on Saturday night, after the pair posted contrasting victories in tonight’s semi-finals.

Federer was first on court and ended the winning streak of lucky loser Borna Coric, ousting the teenager in straight sets, 6-2 6-1. It was a marvellous week for the young Croat, who made the most of his second chance in the tournament to defeat Andy Murray en route to the final 4, but Coric couldn’t handle another strong performance from Federer, who mixed up his game with plenty of slice and serve and volley tennis. Coric offered some hope when he broke serve in the fifth game of the first set, but from there it was largely one way traffic as Federer cruised to victory, much to the delight of the capacity crowd. Having had Richard Gasquet retire after the first set of their quarter-final on Thursday night, Federer was happy to get a full match under his belt in the semi-finals, albeit a relatively quick match.

Federer will be vying for his seventh career title in Dubai tomorrow, but he will have to beat world number one Novak Djokovic if the Swiss star is to lift the trophy once again. Federer outlasted the Serb in the semi-finals in Dubai last year, and this will be the fourth time the pair has played in the final in Dubai. Djokovic produced a flawless first set against fourth seed Tomas Berdych, handing the Czech a 6-0 hammering in blustery conditions. The Serb was in dynamite form on the return of serve, neutralising one of Berdych’s biggest weapons, and the first set was over in less than half an hour.

When Berdych dropped serve early in the second set, it looked as though Djokovic would run away with the match, much as he had done in previous matches this week against Golubev and Ilhan. But to his credit, Berdych remained undeterred, picking up his first serve percentage and taking advantage of a surprising number of unforced errors that started to flow from the Djokovic racquet. The former Wimbledon finalist broke back and then broke once more to be given an opportunity to serve for the set. Berdych failed to capitalise on the opportunity, but remained composed and soon wrapped up the second set, 7-5, to force the match into a decider.

It was always going to be hard for Djokovic to maintain the sublime form he exhibited in the first set, and it was no surprise that he went off the boil in the second set. The world number one managed to regroup in the third set, breaking midway through the set and eventually prevailing 6-0 5-7 6-4. It was a valiant comeback from Berdych, but once again Djokovic showed that there is no one better on the ATP Tour at present at getting the job done on court. Despite a whopping 48 unforced errors for the match (a fairly surprising statistic given the ease with which Djokovic claimed the opening set), the Serb is through to another final in Dubai.

With Federer having been forced to retire from the championship match against Djokovic at the World Tour Finals in December, fans will now get a chance to see the pair play out a blockbuster in Dubai. It’s a toss of the coin in my opinion – Federer loves the court and the crowd here in Dubai (although Djokovic has had great success here too) but Djokovic has, for the most part, looked incredibly strong this week. Federer came back to beat Djokovic in Dubai last year, but I don’t think the Swiss great will be so fortunate this time around. I’ll take Djokovic to prevail in two very tight sets.

That’s it for today. Enjoy the tennis and I’ll back with another serve tomorrow to review the final. In the meantime, keep up with all of the action on Twitter: @satelliteserve.