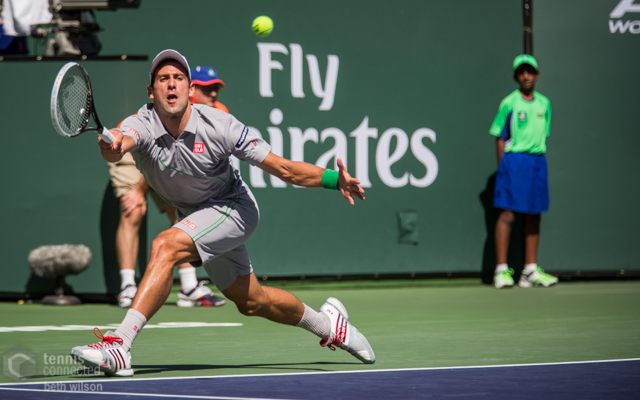 Wednesday saw a host of activity at the Aviation Club in Dubai, with top seed Novak Djokovic and third seed Andy Murray underlining their respective title credentials with impressive displays. Meanwhile, second seed Roger Federer delighted the crowd with an incredible run of 20 consecutive points against Fernando Verdasco, whilst fourth seed Tomas Berdych booked his spot in today’s quarter-finals with a win over Simone Bolleli that marked ATP Tour win number 500 for the Czech star.

The day session saw Murray in blistering form, the Scot conceding just 2 games against Portugal’s Joao Sousa and wrapping up a 6-0 6-2 win in just 57 minutes. Murray, who improved to 5-0 in career meetings with Sousa, will face young gun Borna Coric for a spot in the semi-finals after the lucky loser enjoyed further fortune in his match against veteran Marcos Baghdatis. After Coric took the opening set 6-4, Baghdatis levelled the match at a set apiece by claiming the second set 6-3. The Cypriot then raced out to a 4-1 lead in the decider before cramping got the better of Baghdatis and he was forced to retire with the score at 4-4 in the final set tiebreaker.

It’s hard to conceive of the cramps being so bad that Baghdatis couldn’t play on for a few more points to officially conclude the match, but Coric wasn’t complaining. The young Croat, whose game has been compared to Djokovic’s by none other than the world number one himself, upset Rafael Nadal in Basel last year and will relish the opportunity to test himself against another titan in Murray. Based on the Scot’s form against Sousa, I think Murray will account for Coric comfortably, but the teenager has nothing to lose.

Berdych had a far tougher day at the office than Murray, with the Czech forced to battle for 2 hours and 24 minutes before prevailing in 3 sets over Italian veteran Simone Bollelli.  The Italian had his chances in the first set, squandering a set point in the tiebreaker but, after fighting back to claim the second set, 7-5, the Italian was thoroughly outclassed in the final set, failing to win a game as Berdych became just the eighth active player to record 500 ATP Tour wins. Berdych will face Ukrainian Sergiy Stakhovsky today for a place in the semi-finals after Stakhovsky outlasted Denis Istomin in 3 sets. Stakhovsky is best known for upsetting Roger Federer at Wimbledon in 2013 but currently languishes outside the world’s top 50 and I can’t see him causing Berdych too much trouble today.

Wednesday’s night session saw top seed Novak Djokovic blitz Kazakh Andrey Golubev in one hour flat, the Serb cracking 17 winners, losing just 11 points in total on serve and never giving his opponent a chance to assert himself in the match. Djokovic will play Turkey’s top player, Marsel Ilhan, in the quarter-finals tonight after the world number 104 came from a set down to upset world number 13 Feliciano Lopez in 3 sets. The pair has never played before, but one would imagine that it won’t take long for Djokovic to dismantle the Ilhan game.

Tonight’s marquee match-up features Roger Federer and Richard Gasquet, in what will be a rematch of their showdown in the Davis Cup final last year. A win by Federer in that rubber handed Switzerland its first ever Davis Cup trophy, and Gasquet will be eager for revenge. The Frenchman has won only 2 of 12 career meetings with Federer, but Gasquet will be buoyed by his tight win yesterday over seventh seed Roberto Bautista Agut. Gasquet edged past the Spaniard 8-6 in the final set tiebreaker but will need to elevate his game if he is to challenge Federer tonight. The Swiss star recovered from a shaky start last night to see off Fernando Verdasco, the second seed putting together an incredible run of 20 consecutive points as he fought back from a 4-1 opening set deficit to take the set 6-4. Verdasco, who started off the match in a blaze of glory, struggled to control his emotions after letting his lead in the first set slip, and two breaks to Federer in the second set handed the six-time champion a 6-4 6-3 victory in 60 minutes.