Last year, Tennis Canada and Rogers announced their partnership on the Year-Round Community Tennis Courts Program with the aim of building 160 new year-round courts at up to 30 facilities over the next seven years. The investment addresses the fact that Canada currently falls behind other leading tennis nations in providing access to the sport 12 months a year, with only 750 publicly accessible covered courts across the country. This represents only one year-round court for every 50,000 people.

“Today’s announcement represents a tangible milestone for a vision that has been years in the making as we continue to deliver on our promise to make tennis more accessible to Canadians across the country,” commented Michael Downey, President and Chief Executive Officer, Tennis Canada. “Our thanks go to our partner, Rogers, because the capital seed money they fund has been instrumental in helping to expedite these year-round facility projects. We want to thank as well the municipalities of Ancaster, Markham, Ville de Waterloo (Quebec) and Calgary, who saw the value in year-round tennis access and the resultant capacity building benefits for their communities. Finally, we want to thank the tireless work of local operators to make this all come together. We are certain these projects are the first of many and this landmark announcement will spark many more discussions with municipalities and operators that want to bring year-round tennis, and the resulting health and capacity building benefits, to their communities. This is a watershed announcement for the future of tennis in Canada.”

“We are proud to invest in the terrific work Tennis Canada is doing to enable year-round tennis in communities across Canada to increase participation amongst youth, all local community members and the next generation of high-performance athletes,” said Robert Dépatie, President and Chief Operating Officer, Home and Business, Rogers Communications. “Congratulations to the municipalities and local clubs announced today. This investment will continue to help grow the sport of tennis and provide even more opportunities to keep young people active.”

The projects announced today, which consist of installing air-supported covers or “bubbles” at Ancaster Tennis Club, Premier Racquet Club, Club de Tennis François Godbout and the Osten & Victor Alberta Tennis Centre respectively, are scheduled for completion in time for the 2022-23 fall and winter seasons. As a result of the installations, collectively, these communities will see court time opportunities increase by roughly 15,000 hours during the harsh winter months, which typically render these outdoor courts unusable for 50-75% of the year. In a study commissioned by Tennis Canada, 90% of tennis players stated they would play more regularly if there was a covered court nearby.

“The initiative of Tennis Canada and Rogers building more indoor courts is really amazing,” said 2019 US Open champion and Team Rogers Athlete Bianca Andreescu. “It will give more opportunities to young girls and also young boys. It is super hard finding indoor courts living in Canada, but I think this initiative is amazing.”

Tennis Canada also confirmed today the involvement of The Farley Group in the program. In addition to the much-needed seed money provided by Rogers for each project, the Farley Group will work with any funding recipient that selects their services to provide the project with a contribution towards the cost of the revolving door and air-lock system of the dome. 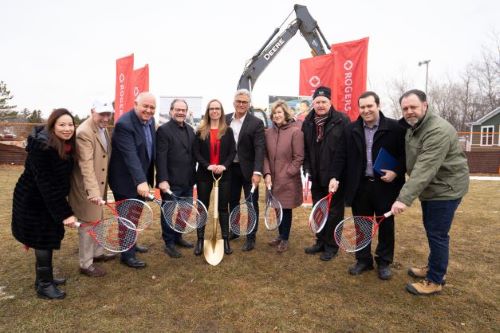 As momentum for the Year-Round Community Tennis Courts Program presented by Rogers continues to grow, with 90% of Canadians agreeing that municipalities should work with Tennis Canada on the initiative, you can learn more about the program and email coveredcourts@tenniscanada.com to find out how you can help kick start a project in your municipality.

Located in Ancaster Park, Ancaster Tennis Club, was built in the 1940s and boasts five lit hard courts which are set to be covered. As a result, the City of Hamilton community will have the opportunity to enjoy its facilities year-round. Once the project is completed, available court time for the community constituents will increase by roughly 3,700 hours from October to April.

Located in Markham, ON, Premier Racquet Clubs is set to cover the current six outdoor courts with a dome installation. The Markham Tennis Club will continue to operate the summer season and this dome installation will now keep the courts active in the winter season, increasing its capacity by approximately 4,500 additional court hours per week during the winter season from October to April.

Situated in Parc Robinson, Waterloo, Club de Tennis François Godbout, which will become Club de tennis intérieur François Godbout présenté par Rogers, has four existing outdoor courts which are set to be covered. As of 2021, Tennis ENRJ, which runs the club’s programming has over 500 players, including more than 100 juniors. The installation of a dome structure is set to accelerate the number of recreational and competitive players in the area with an additional 3,000 hours of court time from October to April expected to be made available.

Founded in 2013 and opened in 2016, the Osten & Victor Alberta Tennis Centre is a staple of the Acadia and Calgary community. Annually, it services 30,000 Calgarians and its programs are operating at full capacity with long waiting lists to join. By covering its five existing outdoor courts, the Centre will increase year-round public access to tennis and will ensure it is able to service 3,700 more court hours during the winter months, adding to their pre-existing eight indoor courts.