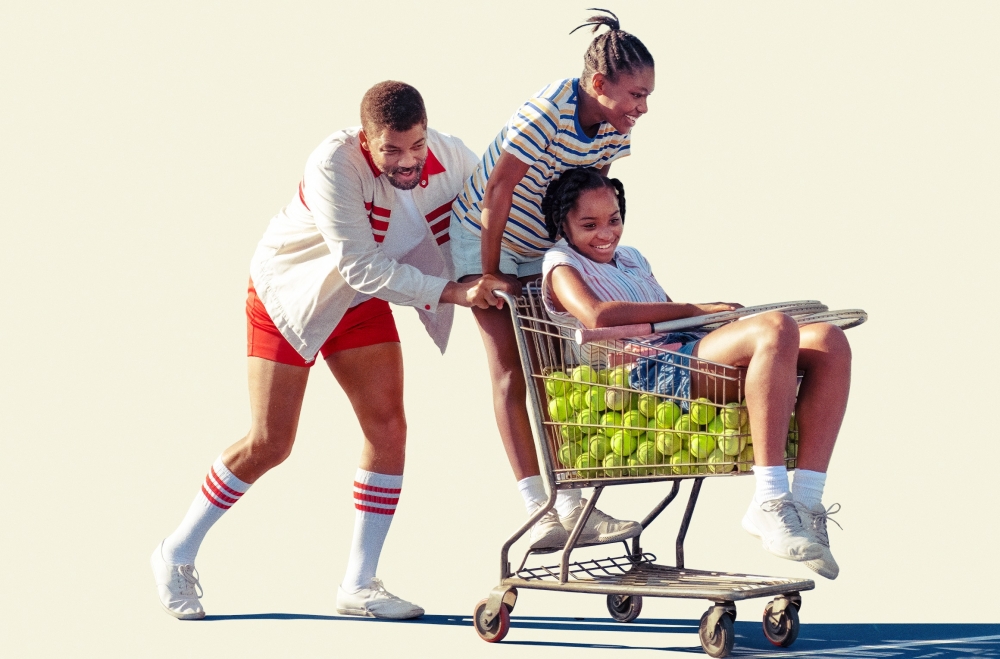 Welcome to Tennis Elbow, the column that looks back on the week that was in the world of tennis. This week, Charles Blouin-Gascon reviews the excellent King Richard movie.

“This world ain’t ever have no respect for Richard Williams. But they gon’ respect you.”

That damn open stance, we tell you.

Richard Dove Williams Jr. believed so much in that open stance that, over the course of King Richard, the movie based on his life, he must have mentioned it dozens of times.

But let’s start from the beginning. King Richard stars Will Smith in the titular role, as well as Saniyya Sidney and Demi Singleton in the roles of Venus and Serena Williams. If you’re here reading this column on the Tennis Connected website, odds are high that you already know most of the Williams story. You know about the 30 combined Grand Slam singles titles (i.e. seven from Venus, 23 from Serena), the 28 combined Grand Slam doubles titles (i.e. 14 apiece), the millions of dollars won in prize money, as well as the countless wins over everyone else in women’s tennis and the ways the sport has changed since their arrival.

If you’re reading this column on this website, odds are high that you already know about the tennis part of the Williams story.

King Richard doesn’t go into all this, because there’s no need for it. As they say, the on-court success was the mere end product of all the hard work that preceded it—and the movie explains what it took for the two Williams sisters to take over a sport and a world that didn’t want to let them in.

From Compton with love

Over the course of King Richard, Richard Williams raises his two young daughters to be great individuals and young ladies first, and great tennis players second. He starts off in Compton, of all places, but this much you probably know. He starts off coaching his daughters on courts that are likely more rundown than the ones you and I played on, and he must fend off the perils of life in the American ghetto.

It’s all part of his plan, and so is teaching his two daughters about hitting with power from an open stance.

Before long, Richard looks for help with coaching from professionals all around the United States, to help his daughters live up to their tennis potential. He trusts others, but to a point: because Richard has a plan, he won’t let others make his daughters venture away from said plan.

It’s a wild plan, one that includes full of the things we would eventually come to know Venus and Serena for, as well as—and here’s where we’re bringing things full circle—hitting with power from an open stance. When professional coaches help Richard coach Venus and Serena, he never strays too far from the courts because he needs to make sure his daughters keep hitting from an open stance.

And so, he keeps reinforcing that idea with them. It may undercut the authority of the coaches helping him, but that’s the furthest thing from Richard’s mind. His daughters will be great, and they’ll be great while hitting from an open stance. Whatever the other coaches think about the idea isn’t Richard’s problem. The other coaches work for him and Venus and Serena, he’s quick to remind them, not the opposite.

Here’s the thing: the plan works!

King Richard tells the incredible story of the man who, late in the 20th century, raised and coached two daughters to take over the tennis world. Then again, he would frown at us for writing “incredible” in the previous sentence. Improbable is likely a better world: the movie explains what it took for the two Williams sisters to take over a sport and a world that didn’t want to let them in. It was deeply improbable, because of the ongoing racial tensions that still chip away at the last vestiges of civil life in American society, but it was no more incredible than for any other player’s career.

The movie is a poignant and human look at the Williams household, that of Richard, Serena, Venus, Oracene, Yetunde, Isha, and Lyndrea. It’s the story of this household with tennis champions, lawyers and doctors. It’s the story of driving and moving across the country to a tennis academy in Florida, then foregoing the chance to play any junior tennis matches.

Above all, King Richard is the story of a man who understood the importance for his young daughters to remain just that for as long as possible: young kids. Richard knew that the time for competition, wins, losses, titles would come. He gave everything he had to protect Venus and Serena’s rights to act their age, despite the mounting pressure for the pair to start playing juniors, or turn professionals, or sign representation contracts, or sign sponsorship deals.

Richard wants to protect their youthful innocence. Maybe that’s why he put himself front and center. Maybe that’s why he pulled stunts after stunt and television interview after television interview: so we would all focus on him rather than his two young daughters, and their excellence. So we would only train our eyes on Venus and Serena only when they both were ready.

King Richard ends well before all the riches, successes and professional wins. Venus hasn’t even *spoilers* signed a first contract yet by the end. But she will, the end credits mention that 9 months later she signed with Reebok for multiple millions.

The other stuff, the wins, the titles, the fame, all of it is not in the movie because that’s not what the movie is about. But we know it’s coming. We all witnessed it. It was all part of Richard’s masterplan.