HISTORY MADE AS DJOKOVIC SECURES RECORD-BREAKING SEVENTH YEAR-END NO. 1

By defeating Poland’s Hubert Hurkacz in Saturday‘s Rolex Paris Masters semi-finals, Djokovic breaks a tie with Sampras, who completed six straight year-end No. 1 finishes between 1993-98. Djokovic has achieved the feat in seven of the past 11 seasons (also 2011-12, ’14-15, ’18 and ’20). 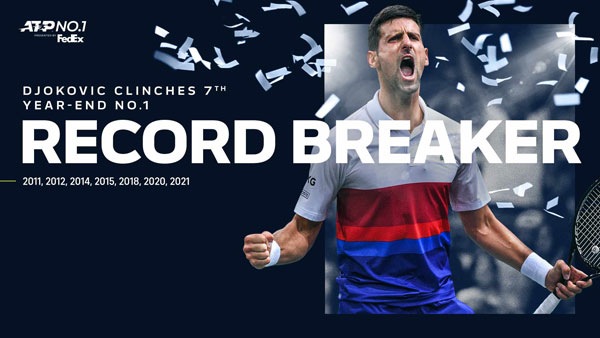 Andrea Gaudenzi, ATP Chairman, said: “Finishing the season as No. 1 is a monumental achievement. To do it seven times, in this incredible era of men’s professional tennis, is hard to describe. Novak deserves huge credit and recognition for continuing to redefine excellence in our sport, year after year. Congratulations to him and his team on this outstanding new milestone.”

The 34-year-old, who extends his record as the oldest man to finish year-end No. 1, came within one victory of completing the Grand Slam in 2021. He went 27-1 at the four major championships with trophies at the Australian Open (d. Medvedev), Roland Garros (d. Tsitsipas) and Wimbledon (d. Berrettini). His bid to match the feat of Don Budge (1938) and Rod Laver (1962 and 1969) ended in the US Open final (l. to Medvedev).

In addition to his three major titles, Djokovic also triumphed on home soil at the Belgrade Open in May. He became the first man since Laver to win each major twice at Roland Garros in June and earned a sixth Wimbledon title in July, drawing him level on a record 20 majors with Federer and Nadal. Djokovic’s career trophy haul stands at 85 (fifth all-time).

Djokovic will attempt to secure a record-equalling sixth Nitto ATP Finals trophy at the Pala Alpitour in Turin from 14-21 November. He will be making his 14th appearance at the season finale, where he will officially receive the year-end ATP Tour No. 1 trophy presented by FedEx.

Why Does the Money Gaming World Attract Tennis Players? Some Statistic and Facts