The younger generation of tennis stars is coming and sooner than we expected it this week in the desert. Amidst a legendary generation with the likes of Serena and Venus Williams and Roger Federer still standing tall, the rising stars of the sport are showing they can compete too.

The future is now for American sensation, 16 year-old Amanda Anisimova, who after earning a wildcard into the BNP Paribas Open is yet to drop a set, after the upset of two-time Wimbledon champion Petra Kvitova. The Russian-born American showed her poise and her impressive game, shocking the Czech star 6-2, 6-4 on Stadium 1. Next for the teenager, another powerful Czech, fifth seed Karolina Pliskova.

Another up-and-coming American came oh so close to a massive upset as 19 year-old Caroline Dolehide brought her big serve and power game to the stage of Stadium 1. The relatively unheralded American showed off some big shots throughout the first two sets, coming just one tiebreak away from shocking the world number one Simona Halep. Dolehide showed she could too be the real deal, but eventually fell to Halep 1-6, 7-6, 6-2.

The established legends of the game are still going strong as well however, as Serena and Venus Williams are set to battle for a fourth round spot while defending champion Roger Federer made it through his opening match in straight sets over Argentina’s Federico Delbonis.

Here’s three intriguing matches to keep an eye on on day six in Indian Wells:

Match of the day: Venus Williams vs. Serena Williams

As fate would have it, younger sister Serena’s tournament back from the birth of her first child just six months ago would come against her beloved older sister, eighth seed Venus. The two American legends last played coincidentally in Serena’s last match before the birth of Olympia in the Australian Open final, where the younger sister won her record 23rd Grand Slam title.

However, here in the desert, Serena has shown flashes of brilliance but the rust has inevitably been there, whereas Venus came out swinging in her first match against Sorana Cirstea. Serena may have the head-to-head and mental edge over her older sister, but Venus has the form and confidence at the moment to take this one.

A surprise winner here in Indian Wells last year, Russia’s Elena Vesnina was a set away from crashing out in her opening match but responded strongly to defeat Cici Bellis. Now the 24th seed faces the same opponent who she kicked her dream run to the title with a win over last year, with two-time major winner Angelique Kerber her opponent on Stadium 2. Kerber looked dejected at times against Vesnina’s doubles partner, Ekaterina Makarova, in the last round but the German has enjoyed a resurgent start to the season and should take care of the defending champion pretty handily. 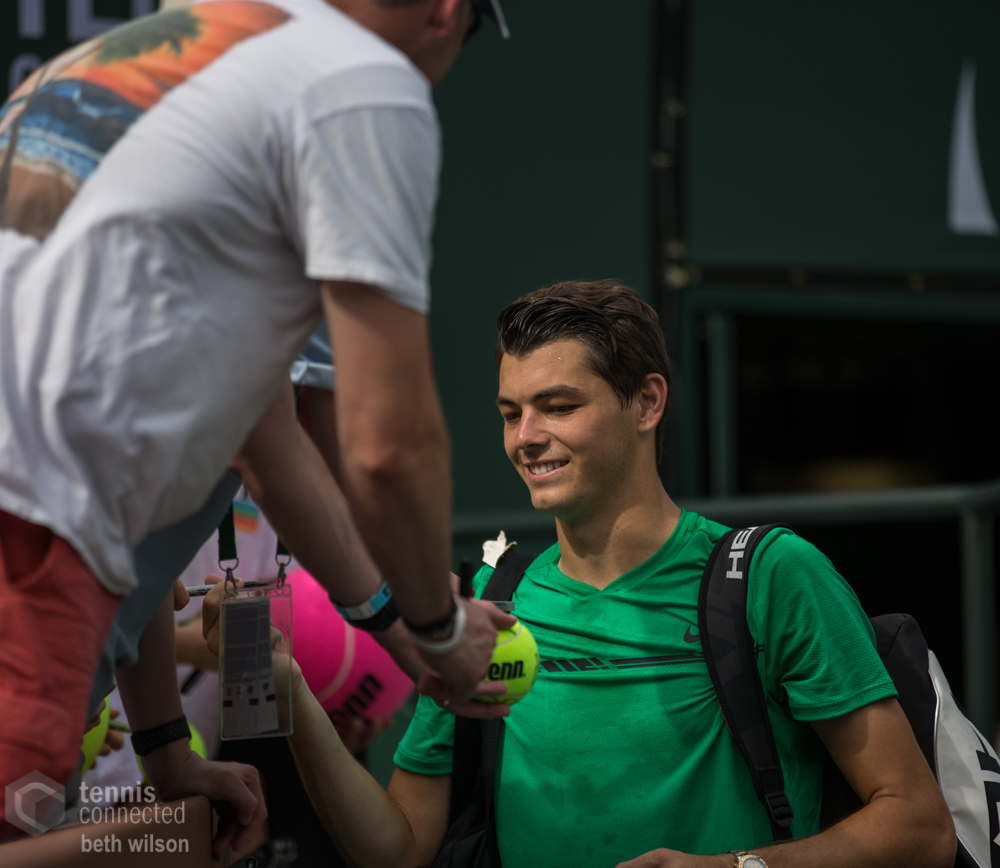 Under the radar match to see: Taylor Fritz vs. Fernando Verdasco

American NextGen star Taylor Fritz will look to continue the success of the rising stars of the sport as he faces veteran Spaniard, the always dangerous Fernando Verdasco. Verdasco is coming in hot after an upset victory over third seed Grigor Dimitrov and with his lethal lefty forehand, can always beat anyone. Fritz, the Southern California kid, has played impressively so far this tournament, knocking off fellow NextGen stars Reilly Opelka and Andrey Rubelv, but the experience of Verdasco should help him find his way through this one.