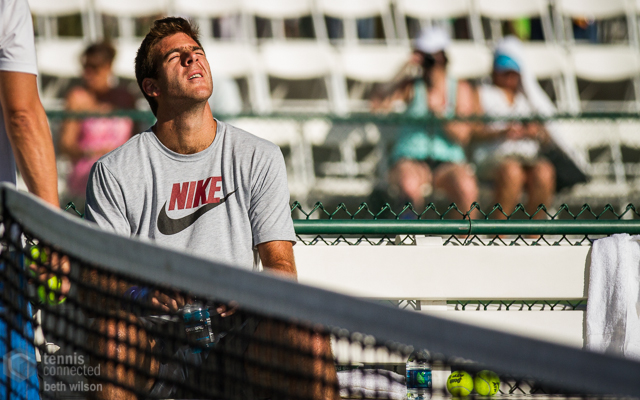 The fourth day at The All-England Club saw it’s first shocking exit. An unfortunate day for rising star Garbine Muguruza, as she seemed lifeless, playing far below her level. Fresh off the back of her stunning French Open title, the young Spaniard was expected to go deep into the business end of the tournament. But the number two seed was seen off by Jana Cepelova in straight sets. Among other fallen seeds were David Ferrer, Gilles Simon, Sara Errani and Sam Stosur.

Wild tennis. Two words not usually found in the same sentence, but that is what promises to transpire on Court 2 should the rain hold off. It seems poetic that the two men who both stunned Rafa Nadal consecutively in Wimbledon 2014 and 2015, should clash on the same stage the following year to square things off. This will be their first ever encounter and by all indications, an explosive one.

Nick Kyrgios and Dustin Brown are probably two of the most captivating players to watch. Both are flamboyant, chaotic, and capable of producing the most incredible shots from anywhere on the court.

Brown, who on Twitter styles himself as DreddyTennis, seems to be entirely made up of arms, legs and dreads. He looks different, he plays different, and the crowds love it. In a baseline era where serve and volley is scarce, Brown is a rare player who still practises the ancient art. Nick plays with a flair which equally delights the crowd. His huge serve and ability to blast off both wings, have proved he has little weakness in his game. Perhaps the maturity to string it all together on a continuous basis is what has hindered the Australian from consistently reaching quarter finals and further.

Dustin will do everything he can to make Nick feel uncomfortable on court, and Nick will do the same. Both men will employ trick shots and look to generate outrageous winners. It will be a day of unorthodox racket swings and unpredictable mood swings. Ultimately the winner will be the player who manages to manage his emotions and keep his focus amidst a heightened crowd. We predict Nick in an exciting four or five sets.

With an exception of Marin Cilic’s surprise 2014 USOpen win, Stan Wawrinka and Juan Martin del Potro are the only men outside the ‘Big Four’ to have won a grand slam in the last decade. They previously met in Wimbledon 2008, where Wawrinka won the match in straight sets. Their last clash was four years ago, and since then their career trajectories have taken off in entirely different directions.

Delpo’s consistent presence in the top ten was hampered by wrist injury, wrist pain, wrist surgery and wrist recovery. He was out almost all of the 2014 and 2015 season. Meanwhile Stan blossomed and flourished generating two stunning wins at Australian Open and French Open. Though many would argue that Wawrinka’s late career surge has challenged the reality of the ‘Big Four’, the humble Swiss is always the first to downplay his own success.

It will be a day of huge serves, powerful ground strokes, and especially fast forehands.The Argentine is the more consistent of the two. He is stingy with the unforced errors, playing a tightly constructed game. Stan will blast the most winners, but also the most unforced errors. Both will need to be a little creative a factor in some drop shots to keep the other off their rhythm.

The head to head is 3 to 2 in favour of Delpo. The outcome of the match will largely depend on if Stan is having one of his consistent days. An on-form Wawrinka is unbeatable. But if he allows the doubts to creep in, Delpo will run away with the match. We predict a tight four-setter in favour of the Swiss.

Big serves and big hits often invite big expectations. And this is certainly true of Miss Keys. She is strong off both wings, though her forehand often does the most damage. Her serves are unusually powerful for the women’s tour, often clocking over 100mph.

With all the right ingredients, many feel that the American is grand slam potential. However poor shot selection and rushed points have resulted in match losses where she should have otherwise won. Though Keys in an all round court player, her greatest performances seem to come on grass, the surface where she has won her two WTA titles. Her best run at Wimbledon was when she reached the quarterfinals last year.

Similarly, her opponent, Alize Cornet is also an all court player. With 5 WTA titles, Cornet actually has a few more more than the American. Her wins come have come on both hard and clay courts. Alize does not have the weapons of her opponent, but she is a tough competitor with surprisingly powerful shots for her slender frame. Also efficient and nimble and around the court, the Frenchwoman can often scurry to return drop shots and short balls.

Madison leads the head-to-head 2-0, and we predict she will extend the lead today in two tight sets over Alize Cornet.