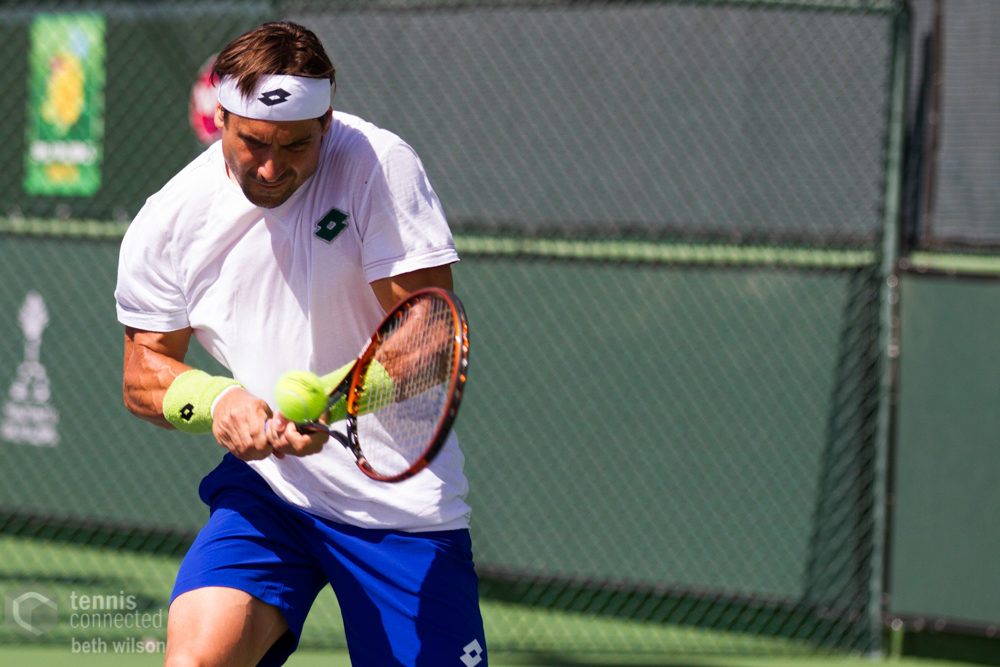 World number one Novak Djokovic scraped through his fourth round clash with Gilles Simon on Day 7, the Serb shrugging off an astonishing 100 unforced errors to book his place in the quarter-finals.

Given the top seed’s brilliant form in the last 12 months, it was startling to see Djokovic turn in an unusually sluggish performance. Simon took full advantage and pushed the Serb to a deciding fifth set, but Djokovic lifted his game when it counted and ultimately prevailed in a 4 and a half hour marathon.

Djokovic will need to produce a better performance against Kei Nishikori in the quarter-finals, after the Japanese star booked his place in the final 8 with an impressive straight sets win over former finalist Jo-Wilfried Tsonga.

Tomas Berdych was another seed put under pressure on Day 7, the Czech seed forced to 5 sets to overcome Spaniard Roberto Bautista Agut. Berdych will face Roger Federer for a place in the semi-finals, after the Swiss superstar brushed aside David Goffin in just 88 minutes.

Aga Radwanska and Carla Suarez Navarro will meet in the quarter-finals after posting fighting 3 set victories. Radwanska overcame the German Friedsam, whilst Suarez Navarro showed her experience in recovering from a first set thrashing to defeat youngster Daria Gavrilova.

After defeating Roger Federer to claim the title in Brisbane a couple of weeks ago, Raonic declared that he was ready to take the next step and challenge for Grand Slam titles. The Canadian has a golden opportunity to back up his talk in this clash against two-time major winner Stan Wawrinka.

Raonic has looked good in his matches in Melbourne so far this year, but Wawrinka has performed exceedingly well at the Australian Open in the last few years, capturing the title in 2014.

Raonic’s serve is his biggest weapon, but he has improved his return of serve and his backhand significantly in recent times. Under the eye of Carlos Moya, I think Raonic will go close in this one, but Wawrinka will get there by a whisker. Wawrinka in 5.

Similar to Raonic, Tomic has a perfect opportunity to show that he belongs in the top tier of men’s tennis. The former junior world champion was offended by recent comments by Roger Federer which suggested that Tomic is still a way off entering the world’s top 10.

Tomic certainly has the talent to make the top 10, and his last 12 months on the ATP Tour have been his most consistent to date. That said, the Aussie faces an enormous hurdle against second seed Andy Murray, who has been to the Australian Open final no less than 4 times and who has never lost to an Aussie. I’ll take Murray in a tight 4-setter. Murray in 4.

Having looked mighty sharp in overcoming Spaniard Feliciano Lopez in the third round, big-serving John Isner faces a very different Spaniard in the form of David Ferrer in the fourth round. Isner has looked almost unbeatable on serve in his first few matches, but Ferrer will almost certainly get back more balls than Isner’s previous opponents.

Ferrer managed to overcome the emotion associated with defeating Lleyton Hewitt in the veteran’s final ATP Tour match, and as a former semi-finalist, the eighth seed has plenty of experience at Melbourne Park to draw on. I’ll back the Spaniard to come out on top. Ferrer in 5.

Qualifier Zhang was on the verge of quitting the sport last year, but the Chinese player decided to give it one last go professionally. After making her way into the main draw, Zhang stunned second seed Simona Halep and has now made it through to the round of 16.

Keys will be drained after the tough fight against Ivanovic and the associated drama involving Ivanovic’s coach, Nigel Sears. Despite this, I think the American will be too powerful for her opponent in this one. Keys in 2.

Azarenka’s form to start the tournament has been nothing short of scintillating, with the two-time champion becoming one of the favourites for the title. Azarenka’s game is perfectly suited to the courts at Melbourne Park, and she seems to have her confidence back and her fitness back to an elite level.

Strycova did well to dismiss Muguruza, although much of that had to do with the Spaniard self-destructing. The Czech player will need to lift her game further if she wants to challenge Azarenka in this one. Azarenka in 2.