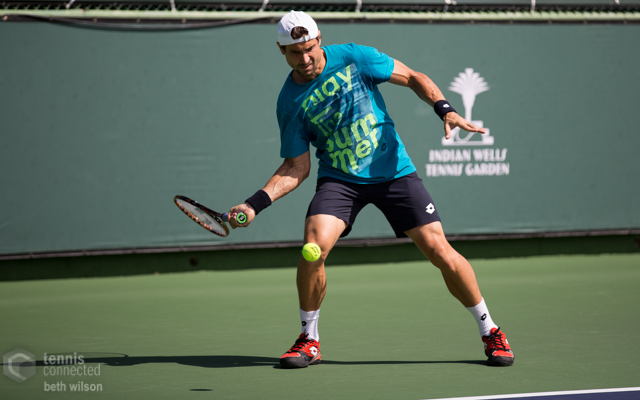 Petra Kvitova was the biggest casualty on Day 3, the two-time Wimbledon champion going down to naturalised Aussie Daria Gavrilova in straight sets.

Two-time major winner Svetlana Kuznetsova joined Kvitova on the sidelines, the Russian going down to the Ukrainian Bondarenko in straight sets. There were no such problems for big names Serena Williams and Maria Sharapova, who each claimed a convincing straight sets win.

In the men’s tournament, Novak Djokovic rolled past the French wildcard Halys in straight sets, as Roger Federer claimed major win number 299 with a 3 set win over Alexandr Dolgopolov. Kei Nishikori and Jo-Wilfried Tsonga also claimed straight sets victories, as Dimitrov and Goffin booked their places in round 3 with 4 set wins.

Nick Kyrgios and Tomas Berdych set up a blockbuster third round clash by claiming 3 set wins on Day 3, as fellow seeds Andreas Seppi, Marin Cilic and Dominic Thiem also advanced to the round of 32.

Big-serving Aussie Sam Groth gets his chance to delight the local fans on Rod Laver Arena when he takes on second seed and two-time Grand Slam winner Andy Murray today.

Groth has worked very hard in the past 12 months to transition from a player known simply for his ballistic serve to a player with other weapons to complement that most dangerous of first deliveries. Murray, however, has plenty of experience in playing big servers and I think he will take his chances and squeeze his way past Groth in a tight 4-setter. Murray in 4.

2015 Wimbledon finalist Garbine Muguruza is seeded third for this tournament and is the second-highest seed remaining in action at Melbourne Park after Simona Halep’s surprise opening round loss. The Spaniard is one of biggest emerging stars on the WTA Tour and is a major threat on all surfaces.

Flipkens was a successful junior player and has a Wimbledon semi-finals appearance to her name, but the Belgian is likely to be simply out-hit in this clash. Muguruza is mighty powerful off both wings and has improved her serve in the last 12 months. Flipkens will compete valiantly, but I think Muguruza will win this one relatively easily. Muguruza in 2.

Lleyton Hewitt’s farewell tournament got off to a successful start on Tuesday, with the former world number one claiming a relatively straightforward 3 set win over compatriot James Duckworth.

Things get significantly harder for Hewitt in the second round, with the Aussie up against eighth seed David Ferrer. The Spaniard is a very similar player to Hewitt, a classic counterpuncher with similarly impeccable fitness levels and an equal amount of tenacity. Form over the past few years suggests a Ferrer victory, but Hewitt will as usual give it his absolute all. Ferrer in 4.

2015 Australian Open semi-finalist Madison Keys opened her 2016 Grand Slam season with an impressive win over Zarina Diyas, but the young American faces another challenge today in the form of Yaroslava Shvedova.

Shvedova is a talented all-court player who has enjoyed success in both singles and doubles. The Kazakh has plenty of experience on the WTA Tour, and will make Keys pay if the nineteenth seed is off the boil. I’ll back Keys to get through, but not without a fight. Keys in 3.

Radek Stepanek is a veteran of the ATP Tour and a two-time winner of the Davis Cup with the Czech Republic. Stepanek is a crafty all-court player, who relies on skill and touch rather than brute power.

Wawrinka enjoyed a quick first round match when his opponent retired midway through the match, and he will be eager to minimise his time on court again today. The fourth seed will need to take Stepanek seriously, but Wawrinka should have too much power for his opponent in this one. Wawrinka in 3.

Put your house on: Victoria Azarenka. The Belarusian didn’t lose a single game in the opening round, and I think the former world number one will enjoy a similarly straightforward win over Danka Kovinic today.

Upset alert: The big-serving Lukas Rosol has upset big names in the past, including Rafael Nadal, and Jack Sock could be added to the Czech’s list of scalps today.

Likely to go the distance: Pencil in 5 sets for the clash between Spanish veteran Tommy Robredo and Canadian seed Milos Raonic.