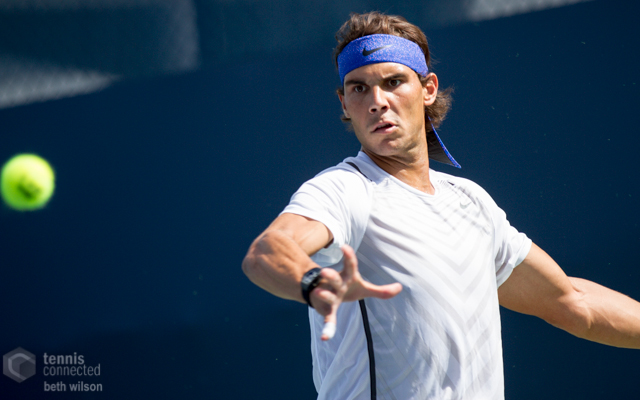 After a 2o15 season that was decidedly mediocre by the Spaniard’s lofty standards, Nadal got his 2016 season off to the perfect start, backing up his 3 set win over David Ferrer on Friday with a classy performance against Raonic. Nadal had beaten the Canadian in 6 of the pair’s 7 meetings on the ATP Tour, but the 14-time Grand Slam champion found it hard to breach the Raonic serve in the opening set. Two break points were all that the Spaniard could muster in the opening stanza, both of them saved courtesy of the world number 14’s ballistic serve. With Nadal taking care of business on his own serve, the first set unsurprisingly ended up in a tiebreaker. Nadal raced out of the blocks and never looked back, claiming the first set by taking the tiebreaker 7 points to 2.

Over the course of the past decade, Nadal has built a reputation as one of the sport’s most successful front-runners and he was predictably in no mood to let Raonic back into the match. The fourth game of the second set proved to be pivotal, with Raonic fighting back from 15-40 down on serve, and then saving another break point with some inspired rallying from the baseline. However, when the former Wimbledon semi-finalist dumped the easiest of smashes into the net, Nadal was presented with a fourth break point and this time the world number 5 made no mistake, capturing the break and holding serve to establish a commanding 4-1 lead. From there, it was only a matter of time, as Nadal continued his strong serving performance and claimed the win in 90 minutes by ripping another forehand winner.

Nadal will hope to build on this win in Doha next week and, most importantly, will look to go deep into the second week at the Australian Open after his 2015 season was devoid of any appearances in the Grand Slam semi-finals. The Spaniard claims the mental issues which affected him last year are behind him and, whilst it’s too early in the season to tell if that is in fact true, all signs point towards Nadal having a promising 2016 season. In Abu Dhabi, he was moving well and hitting his forehand with conviction, with his court position much more aggressive than it was for much of the 2015 season.

Raonic will also be buoyed by his form in Abu Dhabi, which saw him beat Anderson and Wawrinka and put up a creditable performance against Nadal. Under the eye of Carlos Moya, the newest addition to his coaching team, Raonic will be aiming to make more Grand Slam semi-finals this year after his run to the Wimbledon semi-finals in 2014.

In Saturday’s third place play-off, David Ferrer continued his strong early season form, downing Stan Wawrinka in a super tiebreaker after the pair split the opening 2 sets. It was a typically inconsistent performance by Wawrinka, as Ferrer rallied from a 5-0 deficit in the super tiebreaker to claim it 10 points to 8. The Spaniard will next travel to Doha to begin the defence of his Qatar Open title.

That’s it for the coverage from Abu Dhabi, I hope you have enjoyed it. I’ll be back with a preview of the Australian Open in a couple of weeks. Until then, follow all of the action on Twitter: @satelliteserve.