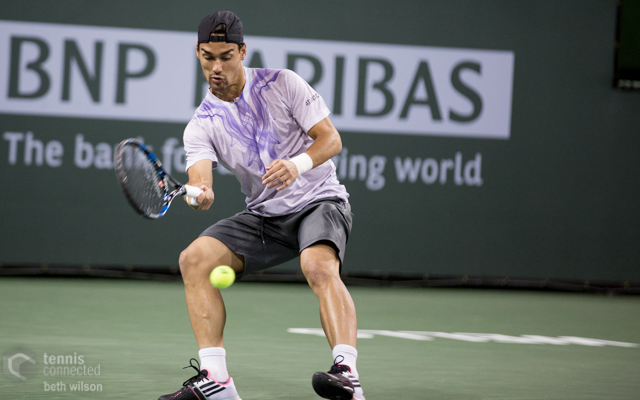 A day after Mardy Fish played his last match at Flushing Meadows, former champion and world number one Lleyton Hewitt said goodbye to the US Open, the Aussie going down to compatriot Bernard Tomic in a sensational 5-setter.

Tomic raced out to a 2 sets to love lead against his Davis Cup teammate, but Hewitt put aside a niggling hip concern to save a pair of match points and force the match to a deciding fifth set. It was then Tomic’s turn to save match points, as Hewitt, similar to Fish on Day 4, was unable to serve out the match. Eventually, Tomic claimed the win 7-5 in the final set to move through to the third round of the tournament for the first time.

In other men’s matches on Day 4, Roger Federer cruised past Steve Darcis in straight sets as Andy Murray was forced to come back from 2 sets to love down to see off the challenge of Adrian Mannarino. Wawrinka overcame rising star Chung in a trio of tiebreaks, as John Isner, Tomas Berdych, Kevin Anderson and Richard Gasquet also recorded second round wins.

Rising star Jack Sock was forced to retire after fainting in the warm conditions against Ruben Bemelmans, whilst big-serving Croat seed Ivo Karlovic went down to Czech youngster Jiri Vesely in a fifth set tiebreaker.

In the women’s tournament, fourth seed Caroline Wozniacki was sent packing on Day 4, the Dane squandering four match points in her loss to Petra Cetkovska. Wimbledon finalist Garbine Muguruza was another casualty on Day 4, the Spaniard going down to Johanna Konta in 3 sets. There were no such problems for most of the other big names on Day 4, with Azarenka, Kvitova and Halep all recording wins.

Former champion Sam Stosur cruised through to round 3 and could be a dark horse as the tournament moves into its second week. Stosur was joined in the round of 32 by Germans Petkovic and Kerber and former French Open finalist Sara Errani, who recovered from a first set bagel to beat the teenager Ostapenko in 3 sets.

Andreas Seppi is a talented counterpuncher and a good mover around the court. The Italian pulled off the biggest win of his career by beating Roger Federer at Melbourne Park earlier this year, and previously pushed Djokovic to 5 sets at the French Open. However, the twenty-fifth seed doesn’t have any huge weapons and so this match is largely on Djokovic’s racquet.

The top seed has looked sharp in his opening couple of matches, not dropping a set. Look for the world number one to continue to build up his form as the tournament moves towards its business end. Seppi will work hard as always, but the Serb will be far too strong today. Djokovic in 3.

This should be a fascinating contest between two players at the opposite ends of their careers. Two-time champion Venus Williams is past her best but is still capable of matching it with the world’s top players when she is fit and healthy and her serve is working well.

Young Swiss star Bencic beat Venus’ sister Serena recently en route to claiming the title in Toronto recently and, with Venus’ famous foe Martina Hingis advising her, the twelfth seed will have plenty of insight into how to dismantle the game of the former world number one. Venus has battled through a pair of 3-setters to make it this far, but I think she will run out of gas against the crafty Swiss player. Bencic in 3.

After losing all of his previous matches against Nadal, Fabio Fognini surprised the Spanish superstar on two occasions earlier this year. Nadal gained revenge in the Hamburg final after Wimbledon, but no doubt Fognini will sense he has a real chance of winning this match.

Whilst Nadal is at his best on clay, the same is true of Fognini, and I think two-time US Open champion Nadal is better at adapting his game to hard-courts than Fognini is. Nadal has had good workouts against Coric and Schwartzman in his first two matches and I think he will be up for the fight in this one. Nadal in 4.

Former Wimbledon finalist Agnieszka Radwanska has won all of the pair’s four previous matches, including a hard-fought 3 set win at Wimbledon earlier this year. This contest represents a classic contrast of styles, with Radwanska the cagey counterpuncher and Keys the hard-hitting aggressor.

With former world number one Lindsay Davenport in her camp, Keys has the right guidance as she seeks to move into the world’s top 10. I think the American is hugely talented and, in front of a home crowd, I think she can end her losing streak against the Pole. Keys in 3.

Both of these players were forced to work hard to progress to this round 3 contest, with Raonic overcoming Verdasco in a tight 4-setter and Lopez getting out of jail against Fish. These players are very evenly matched, having split six career meetings.

Lopez won the pair’s most recent contest in Cincinnati, but Raonic prevailed in 5 sets at the Australian Open earlier this year. I think this one will be another close and hard-fought contest, but I will back the Canadian to come through in the deciding set. Raonic in 5.

Upset alert: Dominika Cibulkova has already ousted Ana Ivanovic and I think she has a very good chance of upsetting another seed in Eugenie Bouchard today.

On Novak Djokovic, COVID-19 and Tennis’s Plan to (not) Return

On Novak Djokovic, COVID-19 and Tennis’s Plan to (not) Return