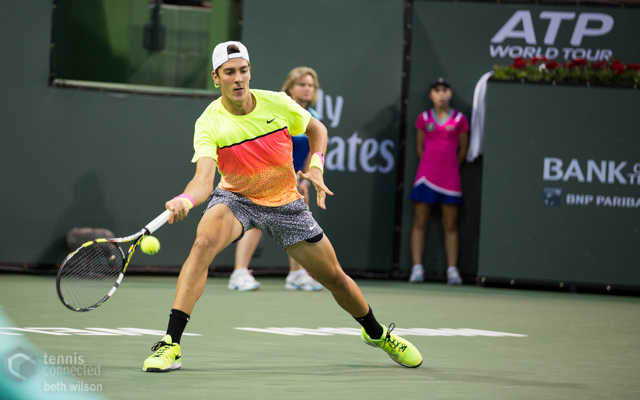 In March this year, I wrote of Australia’s re-emergence on the world tennis scene after a decade or so in the wilderness. Since then, Australian tennis has seemingly been in a perpetual state of drama, with young firebrand Nick Kyrgios facing allegations of tanking (and a barrage of resultant abuse from Aussie swimming legend Dawn Fraser), the mercurial Bernard Tomic involved a slanging match with Tennis Australia (“TA“) and Pat Rafter (which saw Tomic ruled ineligible for the country’s Davis Cup quarter-final against Kazakhstan) and veteran Lleyton Hewitt leading the Davis Cup team (sans Tomic) to a miraculous comeback victory over the Kazakhs which secured a semi-final showdown with Andy Murray’s Great Britain.

So what to make of all the pandemonium? Well, to my mind, Australian tennis is looking far healthier than it has in a long time, and I don’t think the Kyrgios and Tomic incidents referred to above are particularly damaging (even if they have been cannily transformed into headlines by an ever-hungry media).

Let’s have a closer look at the incidents one by one. In the case of Kyrgios at Wimbledon, let’s not forget the bigger picture: a year after stunning Rafael Nadal (and the rest of the tennis world) at the All England Club and making the Wimbledon quarter-finals as a teenager, the 20 year old returned to London and made it through to the fourth round, beating seventh seed and 2014 semi-finalist Milos Raonic en route. In the round of 16, Kyrgios lost to Richard Gasquet, a former Wimbledon semi-finalist, in a fourth set tiebreaker. Gasquet went on to beat French Open champion Stan Wawrinka and reach the semi-finals once more, his run only stopped by eventual champion Novak Djokovic.

Very often, a young player who makes a startling run at a big tournament when he has nothing to lose has an extremely difficult time backing it up the following year. Unlike the first time around, the following year sees him identified as a marked man, and the weight of expectation replaces the previous year’s carefree attitude. In my opinion, Kyrgios did incredibly well to follow his 2014 Wimbledon performance with a run to the fourth run (as an aside, he also backed up his 2014 Wimbledon performance with a brilliant run to the Australian Open quarter-finals).

As for the allegations of tanking in the second set against Gasquet, these are about as idiotic as allegations come. The fact that Kyrgios went on to win the third set and narrowly lose the fourth set (and with it, the match) shows that he was still fixated on winning the match, although going forward he would be wise to vent his frustrations in ways which don’t include easily conceding service games. On this issue, as with many other issues in tennis, Roger Federer is the voice of reason and common sense. This was his take on the tanking saga:

“A game where a guy serves well, is that tanking, too? It’s like … a boxer when he puts his hands down, is that tanking? Then he swings freely again. I think we shouldn’t dig too deep into those kinds of things. If you told me he did an entire set, plus more, plus this, I’d say, ‘OK, it’s a bit much probably.’

But I just watched the end of the third and the end of the fourth. He was fighting then. He was really wanting to win and he should have been in the fifth at the end. So in my opinion, it was a great match and it was close…

So one game to me is part of tactics, as well, sometimes to throw the other guy off. Maybe yourself, you can be frustrated and just not feel like it for a couple of points.”

Moving on to Tomic, his feud with TA largely stems from a belief within the Tomic camp that his sister Sara, also a professional tennis player, has received insufficient support from TA over the years. Whatever one’s views on that point (and it is hard to come to a conclusion without knowing all of the facts), Tomic’s stinging attack on TA had immediate repercussions, with the 22 year old being suspended for the Davis Cup clash with Kazakhstan. To make matters worse, Tomic was then charged with resisting arrest in Miami after an altercation over noise levels in his hotel suite.

Tomic has responded to the furore in the best possible way, last week defending his title in Bogota with a hard-fought win over Adrian Mannarino in the final. Tomic improved to 30-17 on the year with the win, and is finally exhibiting a level of consistency commensurate with his undeniable talent. With Tomic holding a superb 14-2 record in Davis Cup singles play, the pressure is on TA to resolve the rift with Tomic for the good of the sport in Australia and for the benefit of the Australian Davis Cup team.

Speaking of the Australian Davis Cup team, the first day of action in Darwin last month saw the Aussies thoroughly outplayed by a spirited and cohesive Kazakh team. Kyrgios and Thanasi Kokkinakis both wilted under pressure, but Australian captain Wally Masur refused to concede defeat and a victory in the doubles gave Australia a chance going into the final day. Big-serving Sam Groth scored a tremendous win over Mikhail Kukushkin in the fourth rubber, setting the scene for Lleyton Hewitt, Australia’s winningest Davis Cup competitor of all time, to seal the comeback with a win over Aleksandr Nedovyesov.

So, despite all of the controversy, Australia currently has 6 players in the world’s top 100 (4 of whom are 23 or younger) and is back in the Davis Cup semi-finals for the first time since 2006. I don’t know about you, but to my mind that reflects a turnaround story worthy of a few positive headlines to offset the recent flurry of negative headlines surrounding Australian tennis.

That’s it for now. Enjoy the North American hard-courts swing and I’ll be back with another serve before the US Open begins. In the meantime, you can follow all of the action on Twitter: @satelliteserve.

Welcome to the Australian Open, how ready are you to play tennis?