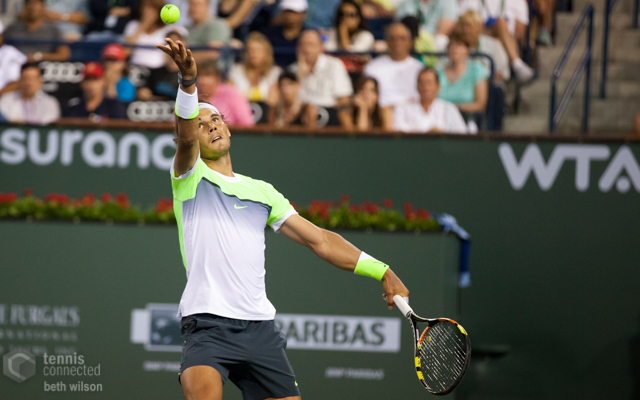 The start of the second quarter of the calendar year sees the members of the ATP Tour transition from hard-courts to clay-courts. For the majority of the big guns (Andy Murray being understandably excused on account of wedding duties) that means reacquainting themselves with the nuances and vagaries of competing on the red dirt in the picturesque setting of Monte Carlo.

The Monte Carlo Masters is the first major clay-court tournament of the year, and one of the most prestigious. For the vast majority of the past decade, it is a tournament that has been consistently and comprehensively the property of one man, Spanish superstar Rafael Nadal. From 2005-2012, the world number 5 claimed an astonishing 8 titles in the principality, before current world number one Novak Djokovic ended Nadal’s historic run in the 2013 final.

Nadal’s dominance means that Monte Carlo remains one of the few Masters titles that Roger Federer has yet to win in his illustrious career, the Swiss legend coming up agonisingly short against compatriot Stan Wawrinka in last year’s final. Last year also saw Nadal record his earliest exit in Monte Carlo since 2003, the 14-time Grand Slam champion going down to fellow Spaniard David Ferrer in the quarter-finals. Last year’s surprise loss to Ferrer in the principality can be considered, in hindsight, as somewhat of an aberration, as Nadal shrugged off the loss (and a somewhat inconsistent clay-court season overall) by defeating Djokovic in 4 sets to claim a record ninth French Open title.

This year, however, feels different. 2014 saw Nadal make the final of the Australian Open and the Miami Masters, and collect trophies in Doha and Rio, before making his way to Monte Carlo. This year, his only title to date has been his victory in Buenos Aires (in what was, to be frank, a fairly weak field) and he has struggled against players he used to defeat consistently, losing to the likes of Berdych, Raonic and the journeyman Berrer already in 2015.

Given his ultra-aggressive and combative approach to the sport, and the resultant physical problems Nadal has faced over the years, any signs of poor form on the Spaniard’s part are almost always associated with speculation as to possible injuries or ailments. Whilst Nadal’s 2014 campaign was cut short as a result of wrist problems and appendix surgery, this time around it seems that the Spaniard’s problems are more mental than physical. Nadal has made successful comebacks from injuries before, but in this case it seems that the lay-off in the latter part of 2014 has had a flow-on effect: draining him of his confidence on court.

After losing to countryman Fernando Verdasco in Miami last month, Nadal spoke of enduring nerves on court and struggling to keep his emotions in check across the inevitable ebbs and flows of a match. It certainly shows in his game, with the Spaniard lacking aggression off the backhand wing (in particular, showing a reticence to go for the down-the-line backhands that have been crucial in his most recent wins over Djokovic) and generally being content to be moved far behind the baseline. At his best, Nadal’s backhand is a fearsome weapon (albeit not quite on a par with his peerless forehand) and, when full of confidence, the Spaniard simply refuses to be pushed around the court.

For Nadal fans, there is no reason for extreme alarm: the Spaniard is already the greatest clay-courter the sport has ever seen, and it would be foolish to write him off at this stage. If Nadal is able to get some wins under his belt early in this year’s clay-court season, I have no doubt that his confidence will earn a quick and significant boost, and his assuredness and movement abilities on clay (vis-à-vis many of the other top players) will give him an edge in many contests which could well prove decisive. That said, the threats to Nadal’s red dirt reign are myriad: Federer desperately wants to win the title in Monte Carlo, Djokovic is in peak form and longs for a title at Roland Garros to complete the career Grand Slam and cement his spot among the greats, and the old warhorse David Ferrer is enjoying a tremendous start to the season, having already claimed 3 titles.

I predict that Nadal will enjoy a relatively successful clay-court season (as judged against objective standards and not against Nadal’s past heroics), going deep in all of the tournaments and possibly collecting one or more titles. However, at this stage I can’t see him being able to stop Djokovic, either in Monte Carlo this week or at Roland Garros, if the pair should meet there in June. Whilst this prediction might represent cause for concern amongst hard-core Nadal fans, for the rest of the tennis viewing public it is most likely a welcome and exciting change: for the first time in a decade, the race to be crowned the King of Clay is legitimately up for grabs.

That’s it for this month. Enjoy the beginnings of the clay-court season in Monte Carlo, and I’ll be back with another serve next month. In the meantime, you can follow all of the action on Twitter: @satelliteserve.

Nima Naderi - May 9, 2021 0
Mutua Madrid Open—Madrid, Spain No. 5 seed Alexander Zverev completed a stellar week of tennis at the Madrid Open on Sunday, dismissing No. 8 seed...