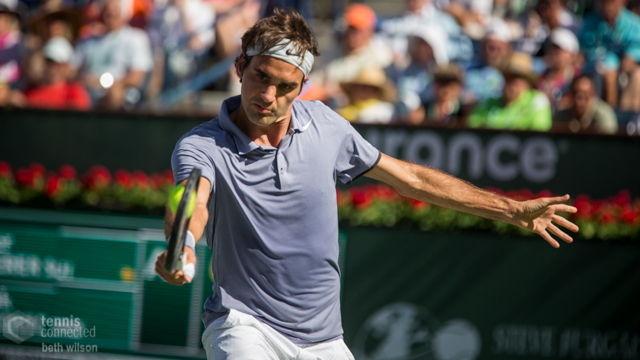 For the seventh time in his career, Roger Federer is the men’s singles champion at the Dubai Duty Free Tennis Championships, the world number 2 upsetting top seed and world number one Novak Djokovic in straight sets in 84 minutes to capture the title in front of a capacity Centre Court crowd at the Aviation Club.

In conditions featuring a slight breeze but which were otherwise perfect for tennis, both players performed at a high standard from the outset. Serving first, Federer was the first of the pair to get himself into trouble, forced to serve his way out of jail in the third game to stay in front. In what proved to be a portent for the rest of the match, Federer produced clutch tennis on those break points, with Djokovic simply unable to capitalise on the opportunities that he created. A slight opening in the eighth game was all Federer needed to break the world number one, and the crowd favourite had no trouble serving out the set, 6-3, to take a commanding lead in the final.

Under the watchful eye of coach Boris Becker, Djokovic didn’t panic at the start of the second set, keeping his nose in front courtesy of serving first in the set, and ratcheting up the pressure on the Federer serve with increasingly accurate and penetrating returns. Both men managed to hold serve in the early and middle stages of the second set, but as the set edged closer to a climax it was Federer feeling all the pressure, twice forced to come from 15-40 down to hold serve. Djokovic, however, evidently frustrated by his inability to break the Federer serve, threw in a loose service game, with a double fault and a vintage Federer forehand winner combining to give the Swiss legend a chance to serve for title number 84 of his illustrious career.

Federer, who owns an apartment here in Dubai and spends much of his offseason training here, is treated almost like a local by the fans, and so it was to the delight of the huge crowd that the 17-time Grand Slam champion was able to serve out the match, surviving one final break point to record a 6-3 7-5 win and once again reign supreme in the biggest city in the United Arab Emirates. In a tight tussle between the world’s top two players, there was one statistic that summed up the match: Federer successful on both of his break point chances for the match, Djokovic a desultory 0/7 on his opportunities to break the Federer serve. Full credit to the world number 2, with 37 winners to Federer (compared to 19 for Djokovic) clearly indicating that the 33 year old won the match with his aggressive play, and wasn’t simply waiting for mistakes to flow from the Djokovic racquet.

After the surprise loss to Seppi in Australia, which was something of an aberration given Federer’s strong form of the last 6 to 12 months, this win will help boost the Swiss star’s confidence as the action moves to the US for the Indian Wells and Miami Masters events. Djokovic has been dominant in both of those events in the last few years and, while tonight wasn’t the best match from the Serb, in reality he just needs to tighten up his play on the big points and he will be extremely hard to beat in the States.

That’s it for my coverage of the Dubai Duty Free Tennis Championships. I hope you have enjoyed the coverage. I’ll be back soon, but in the meantime you can follow all of the action on Twitter: @satelliteserve.