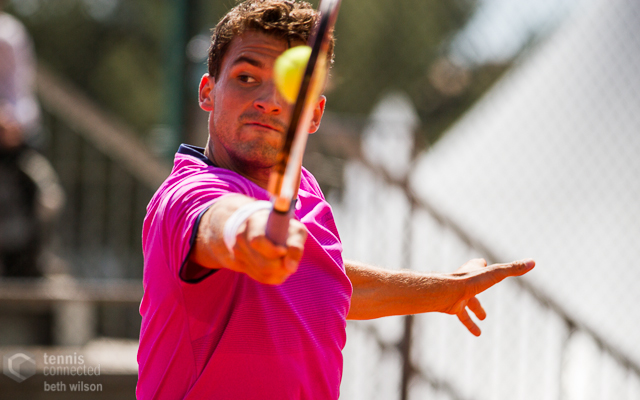 Rain interrupted the play on Day 2 at Roland Garros, but it stayed away for enough of the day to enable big names Nadal, Djokovic and Sharapova to book their places in round 2 of the tournament.

Marin Cilic continued his strong 2014 season with an easy opening round win, whilst last year’s quarter-finalist Tommy Robredo also got this year’s campaign off to a positive start. Local hero Gilles Simon pleased the crowd by cruising to victory, but there was heartache for ninth seed Kei Nishikori. In cold and wet conditions, the Japanese star struggled with his movement as he continues his recovery from hip and groin injuries, eventually succumbing in straight sets to rising star Martin Klizan.

There was better news for another Frenchwoman, seed Alize Cornet, who registered an impressive win over young Aussie Ashleigh Barty. An Aussie on the right side of the ledger was former finalist Sam Stosur, who thrashed Monica Puig, 6-1 6-1, with the 2011 US Open champion being joined in the second round by Italian veteran Flavia Pennetta.

After losing to Bernard Tomic at Wimbledon last year, Frenchman Richard Gasquet will be out for revenge in front of his home crowd in Paris. Tomic is a tricky player on grass-courts, but the Aussie is less at home on the red dirt, and Gasquet will be looking for this tournament to rejuvenate what has been a relatively ordinary season to date.

If Gasquet’s season has been mediocre to date, Tomic’s has been disastrous, with an impressive run to the final in Sydney offset by an opening round injury in Melbourne, a record-breaking thrashing by Nieminen in Miami, and an unsuccessful clay-court season so far. Tomic might steal a set, but that’s as well as he will do in this one. Gasquet in 4.

Gael Monfils wowed the Roland Garros crowd with his dancing before the tournament; now it’s time for the electrifying Frenchman to impress his legion of fans with his tennis. A former French Open semi-finalist, Monfils seems to grow an inch when playing in front of his home crowd and has had a very consistent start to 2014, finally being able to string together a series of tournaments after suffering injury after injury in the past few seasons.

Romanian veteran Hanescu remains in great shape and is a solid all-court player capable of good performances on all surfaces. That said, if Monfils is on song he should have too much flair and imagination for his older opponent. Monfils in 4.

I’ve backed China’s Li Na to make it through to the women’s final from the bottom half of the draw, but the second seed faces a tough opening battle in her quest to make it through to the final Saturday of the tournament. Her opponent on Day 3, France’s Kristina Mladenovic, is a former top-ranked junior who won the French Open juniors in 2009 and who has enjoyed a lot of recent success in mixed doubles.

Li Na will not be taking this match lightly after crashing out of last year’s French Open early in the first week. That loss seemed to provide the catalyst for Li’s terrific finish to 2013, and she is now at a career high second in the world rankings. Mladenovic will put up a decent fight in this one, but Li Na will be too good. Li Na in 2.

Simona Halep and Alisa Kleybanova have both been in the tennis news over the past couple of years, the Romanian as a result of her sterling play which has seen her enter this tournament seeded a career-high fourth, and the Russian as a result of her brave fight against Hodgkin’s lymphoma and her inspiring return to the WTA Tour after time out to fight the disease.

Kleybanova has won the respect of all of the players in the locker-room for the courage and determination that she has shown in the fight for the health, and I wish her all the best as she continues to improve her tennis as she gets more matches under her belt. Halep, however, is in career-best form and is likely to be more consistent in this encounter. Halep in 2.

Ivo Karlovic has ridden his serve to a lot of tiebreakers and a lot of wins over a lot of years, including an impressive run to the final in Dusseldorf last week, but the giant Croatian faces an uphill battle against eleventh seed Grigor Dimitrov in the opening round.

Teaming up with renowned coach Roger Rasheed has proved to be an absolute blessing for Dimitrov, with the fitness fanatic Rasheed instilling a strong sense of discipline and self-belief in his charge. Two titles in 2014 and a rise in the rankings are testament to the hard work put in by Dimitrov and Rasheed. The Bulgarian will need to be patient against Karlovic and seize his chances, but not doubt Rasheed has his pupil raring to go. Dimitrov in 4.

Put your house on: David Ferrer to grind his way past Dutchman Igor Sijsling. On clay, the fifth seed will be too fit and too consistent for Sijsling.

Upset alert: Belgium’s Yanina Wickmayer could upset Danish seed Caroline Wozniacki, who is struggling with a knee problem and being forced to adjust to life after Rory McIlroy.

Likely to go the distance: Frenchman Stephane Robert and big-serving South African Kevin Anderson seem set for a 5-setter on Day 3, whilst the clash between former world number one Lleyton Hewitt and Argentine Carlos Berlocq could also be an epic contest.