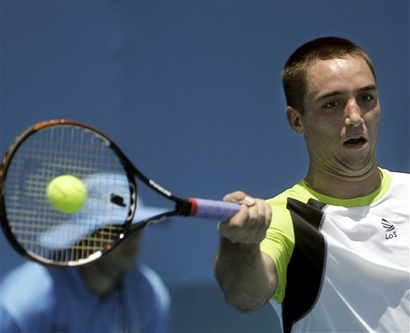 In a recent interview given to TennisConnected.com, world No. 29 Viktor Troicki shared his outlook on the 2010 season, his upbringing in war-torn Serbia, and his day-to-day training regime.

Troicki, 23, currently resides in Belgrade, Serbia and is coached by Jan de Witt.

Troicki began the year by reaching the semifinals of the Qatar ExxonMobil Open (l. Rafael Nadal), has reached two ATP World Tour finals during his four year career—the first in Washington, D.C. (2008), and the second in Bangkok, Thailand (2009).

The powerful 6’4″ right-hander has made a steady climb up the world rankings (ranked as high as No. 24 in August 2008), using his work ethic and determined demeanor to defeat the world’s best.

The witty Serbian will next see action at the Australian Open in Melbourne as a seeded competitor.

Q. After reaching a career high of No. 24 in the world last year, what are your immediate and long term goals for 2010?

A. The goal for 2010 is to reach the top 20 at end of year. Anything better is great, [and I] feel I can do it. I have been beating guys top 20 this year so I guess it is a realistic target.

Q. At what stage in your junior development did you decide that you wanted to turn professional?

A. I took the decision when I was already 19. When the junior tournaments finished I didn’t know what to do. I had to choose between going to college in the US or trying to be a pro. I played a few tournaments to try [my luck] and soon reached the finals of a Challenger [event] (Banja Luka). After that result I thought that maybe I could have made something in tennis.

Q. Serbia was never known as a tennis nation before Novak Djokovic and yourself burst onto the scene. What factors would you attribute to Serbia’s rise as a tennis country; are there upcoming juniors in the Serbian system?

A. There is no factor in particular. We all had nothing, that’s for sure. Everybody was practicing abroad, we had zero help from anyone, zero sponsors, only our parents. Thanks to them we could practice and play tournaments and finally many of us did great!

Now tennis is really big in Serbia! They follow all our matches and it is a great thing. Finding free tennis courts in Belgrade is impossible, [and] everybody wants to play.

We have really good juniors, I think Europe’s No. 1 U14 and U16 boys are Serbians; I think girl U16 as well. They can become good players.

Q. What would you describe as the greatest adversity you faced while growing up in your tennis development?

A. It has always been really tough. I didn’t have much money to play a lot of tournaments, no coaches and I was doing everything on my own. I even had to buy racquets and gear, things that a normal player never faces in life.

Another huge problem was getting the visas. Often I wouldn’t get it on time and that made me skip tournaments.

Now life has become so much easier! But the difficult periods have made me stronger, I felt all these bad things and now I can really appreciate what I have.

Q. What fundamental changes, if any are you looking to make in your game going forward?

A. [There are] no fundamental changes [to make], I want to [play] aggressive tennis on consistent level, [with] no ups and downs. Two years ago I had a lot of ups and downs, last year it was already a lot better.

I need to stay healthy and for sure I will improve my game, especially if I get to play the top guys [more] often.

Q. In 2009 you defeated the likes of Jo-Wilfried Tsonga, David Nalbandian and Tomas Berdych. What would you deem as the biggest win of your career thus far?

Maybe more the match against Roddick, because I beat him in the US, and it felt nicer.

Q. How would a normal day of training unfold for you? In terms of fitness, on-court hitting, and nutrition?

During tournaments I do a lot less because I need to stay fresh. You can say I do maybe half of the normal stuff.

Eating in restaurants all year it’s difficult to talk [about] nutrition manners. I like most of the food, [I] don’t eat junk [food], but I don’t have a special diet.

Q. Who were your biggest tennis idols growing up, do you still ask for guidance from any current or retired players?

A. I don’t ask anyone; I don’t know most of them personally. My idol [growing up] was Andre Agassi. He was my true hero, [and] I loved everything [he did]. I had his racquets, his clothes, and copied him in everything.

Q. What would you like to accomplish before you end your career?

A. There is a lot of stuff to accomplish! I would like to be in a Grand Slam final. Of course I would like to win it, [but] it would be already great to feel the final atmosphere and to play. It is unbelievable for sure.

Q. Finally, and this a question we ask all the Touring pros, what is the strangest locker room story you can share?

A. Nothing special really that I can think of now.