Wozniacki ascends to the No.1 spot for the first time since January 2012 after defeating the reigning World No.1 Simona Halep to lift her first Grand Slam trophy at the Australian Open on Saturday. Wozniacki’s return to the top of the game marks exactly six years since she held the top spot, the longest gap since computer rankings were introduced in November 1975.

Since the start of the 2017 season, Wozniacki has won 71 matches, more than any other player, and also owns the most wins on hardcourts within that period (52). During this successful run, she defended her title at the Toray Pan Pacific Open (Tokyo) and won the prestigious 2017 BNP Paribas WTA Finals Singapore presented by SC Global. She reached a further six finals last season and started her 2018 campaign with a runner-up finish at the ASB Classic (Auckland).

The Dane first captured the No.1 ranking on October 11, 2010 and became the 20th woman overall and the first representing Denmark. Her second and most recent stint at the top lasted 49-straight weeks from February 2011 to January 2012. Including this upcoming week, Wozniacki will sit at No.9 on the all-time list for weeks at No.1, with 68.

At the start of the 2018 Australian Open, six players had a chance at leaving Melbourne Park with the No.1 ranking. By capturing her first Grand Slam title in Melbourne, the Dane ensures her ascension to the top spot.

“It was a dream come true to rise to World No.1 in 2010, but, to do so again after so many years really makes me proud,” said Wozniacki. “To become World No.1 again after winning my first-ever Grand Slam here in Melbourne is one of the happiest and proudest moments of my career.”

“This is a special moment for Caroline and I congratulate her on this deserving feat,” said WTA CEO and Chairman Steve Simon. “Caroline’s journey and career has been remarkable and inspiring to fans around the world. Her hard work and determination has paid off and we at the WTA are very proud to see her attain the very special ranking of World No.1.”

Wozniacki will be presented with the WTA World No.1 Trophy, the focal point of which is a silver “star-map” tennis ball that represents the tennis universe. All world No.1s, past and present, are depicted by a diamond in the sky, which represents each champion’s mark on the sport.

Wozniacki is one of 25 players to reach the pinnacle of women’s professional tennis since the computer rankings were created in 1975. 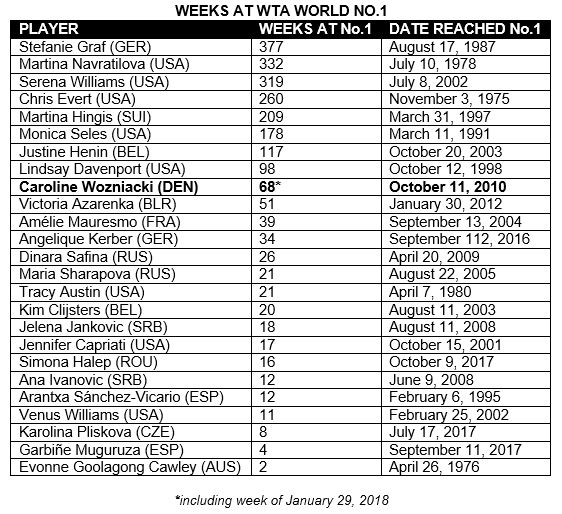