(FILA North America) – To commemorate Kim Clijsters’ upcoming International Tennis Hall of Fame (ITHF) induction and longstanding relationship with FILA, the company has released a special collection in her honor. The apparel and accessory range is a limited-edition reissue of the brand’s iconic farewell collection worn by Clijsters in 2012. The line will be available exclusively at the International Tennis Hall of Fame, beginning on July 17.

Clijsters achieved tremendous success throughout her tennis career. The former world #1 was one of the most recognizable and well-respected players on the WTA Tour. Among Kim’s memorable accomplishments was her incredible comeback to tennis in 2009, when she became the first unseeded player and wildcard to win the US Open. With this victory, Clijsters also became the first mother to win a Grand Slam in the Open era since former FILA sponsored athlete, Evonne Goolagong. Kim’s professional achievements as a working mother are a continued source of inspiration for fans today. 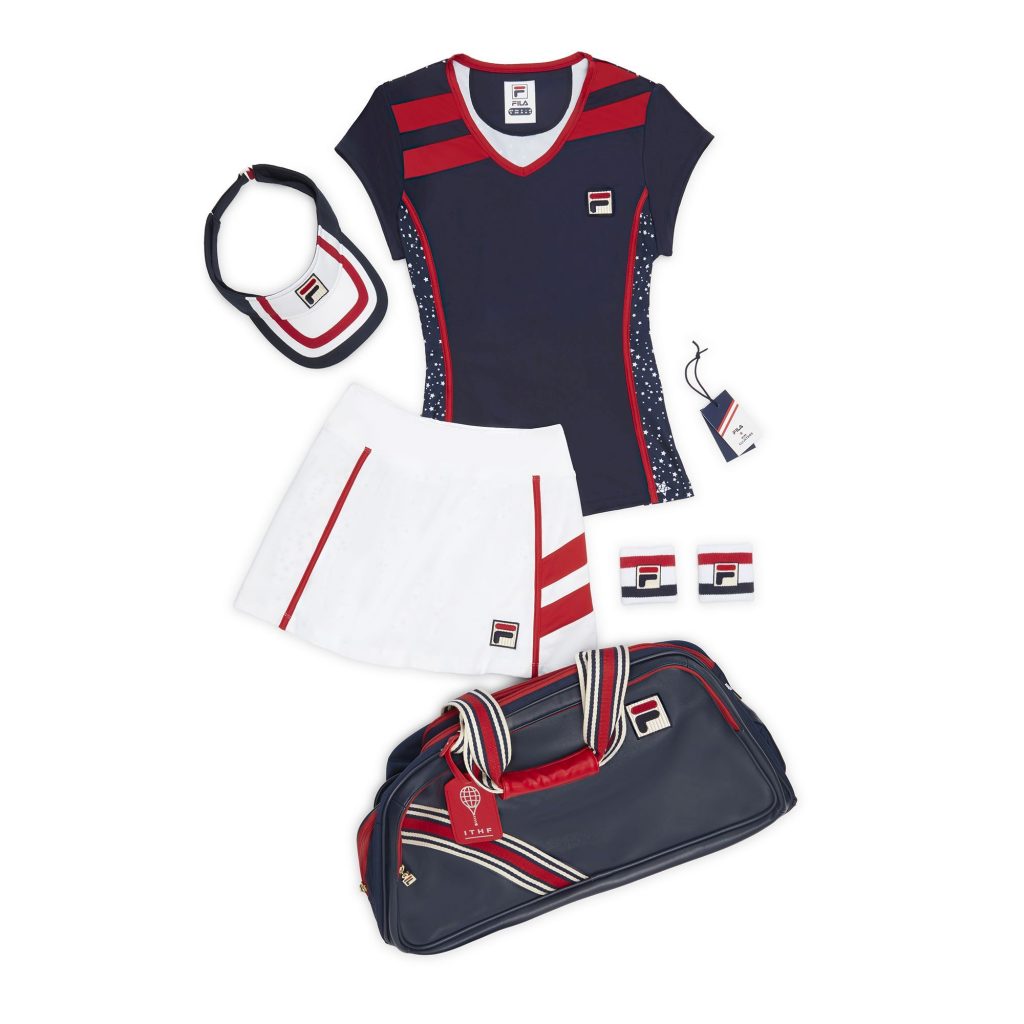 “We are thrilled to support Kim as she receives the highest honor in tennis,” said Gene Yoon, Global Chairman at FILA. “Kim has been a part of the FILA family for many years and she is an outstanding ambassador for the brand. As a proven champion on and off the court, Kim’s legacy extends beyond the game. We are excited to debut a collection with the International Tennis Hall of Fame that celebrates a terrific talent, an incredible woman and a true icon in the sport.”

The FILA x ITHF x Kim Clijsters collection is filled with personal touches. The items feature a red, white and navy color palette to pay homage to her adopted home (USA), while also highlighting FILA’s signature hues. The line includes a cap sleeve top, one of Kim’s favorite silhouettes, as well as a matching skort. Both pieces are available in navy and white colorways, with accents of red.

The apparel was designed with a star pattern that serves as a tribute to Kim’s career and her time with FILA. Hundreds of small stars decorate the gear, while eleven large stars are meant to represent her years with FILA. Inside four of those eleven stars is an outline of a tennis ball, to highlight her four Grand Slam titles. Additional design elements include diagonal red stripes across the upper chest and red piping at the start of the star pattern.

The red taping continues down the front of the skort while diagonal red stripes start from mid-thigh and wrap around the back of the skirt to the waistband. The ball shorts mirror the cap sleeve top, as they feature the same star print pattern. To complement the apparel, a selection of accessories including a visor, wristbands and a duffle bag round out the collection.

“FILA is a part of my life to this day and I’ve always appreciated their loyalty and support immensely,” said Kim Clijsters. “It’s so special to me that they have gone to such great lengths to celebrate my Hall of Fame induction. This outfit has meaning in every detail. It’s representative of my entire career and to see it out again as I become a Hall of Famer is really moving for me. At this point in my career, I’m focused on the next generation of tennis players and to know that the proceeds of this collection will help players who are trying to build their careers is extra special. I’m grateful for FILA and the International Tennis Hall of Fame’s support in this important effort.”

A portion of the proceeds from this collection will help the ITHF, a non-profit organization committed to preserving tennis history and celebrating the sport’s greatest legends, and Ten4Kim, a foundation founded by Clijsters to provide funding to juniors in need of financial assistance for practice, travel, and coaching.

“FILA was an integral partner in Kim’s extraordinary tennis career. This collection is a really special way to celebrate Kim’s long-time partnership with FILA and her many accomplishments as she becomes a Hall of Famer,” commented ITHF CEO Todd Martin. “FILA and the International Tennis Hall of Fame have a shared commitment to working to inspire future champions in our sport, and we are very excited to be able to collaborate with FILA on a project that will contribute to youth tennis programming here at the ITHF and through Ten4Kim.”

Kim Clijsters will be inducted into the International Tennis Hall of Fame on July 22, in a grand ceremony and celebration in Newport, Rhode Island. She is the second Belgian player to be inducted, joining Justine Henin who was inducted in 2016.