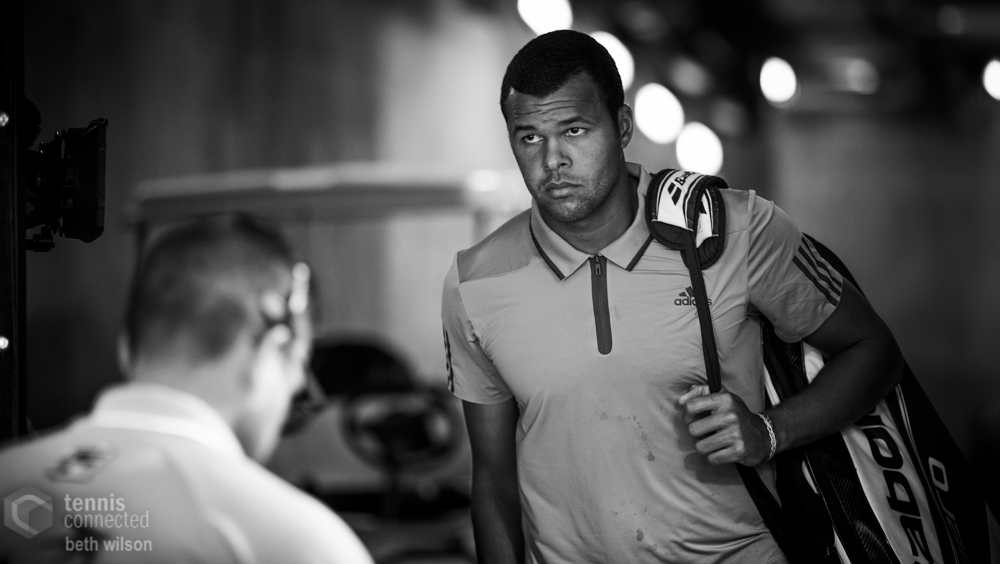 The middle Wimbledon weekend brought a few surprises this year. For the first time in twelve years play resumed on the “People’s Sunday” in order to keep from falling too far behind schedule. Former champion, Petra Kvitova was dismissed in straight sets. But the biggest surprise was the unexpected fate of Novak Djokovic. The double defending champion was obliterated by America’s Sam Querrey in four sets, his earliest grand slam exit since 2009. With the top seed now gone, the balance of the men’s draw has dramatically changed, positioning Andy Murray as the likely favourite.

If any player deserves a day of rest, it would be Jo-Wilfried Tsonga. The Frenchman battled his way through a five set thriller against John Isner. The match, which began on Saturday, was postponed overnight with Isner ahead two sets to one. Play resumed on Sunday, and ended with Tsonga finally breaking the American’s big serve to win the fifth set 19 to 17.

After being on the court for four and a half hours, the outcome of this match could depend largely on how well Tsonga recovers. He and Richard Gasquet have played each other eight times and have an equal head to head. Jo, however, has the edge in grand slams, where he has beaten Gasquet twice at the Australian Open.

Both Frenchmen have reached the Wimbledon semis twice in their career, with Gasquet doing so more recently last year. The two men have been ranked inside the top ten. Tsonga ranking as high as number five, and Gasquet as high as number seven. They also hold a comparable number of ATP titles, Tsonga with twelve and Gasquet with thirteen.

But when considering their playing styles, that is where their similarities end. Gasquet scuttles around the court deftly swooshing his groundstokes with elegance and wrist flicks. Tsonga bounds between the lines crushing angled shots. Though both have exciting shot-making abilities, Gasquet’s magic comes from his backhand while Tsonga’s forehand does the real damage. Jo’s serves are deadly, reaching up to 147 mph. Gasquet is a better returner than Jo. If Jo is serving particularly well, we predict him to come through in four sets.

With most female players hovering in the vicinity of 6ft, it is unusual to find a top player below 5ft 5″. Which is what makes Dominika Cibulkova quite special. The “pocket rocket” generates surprising power and racket head speed from her 5ft 3″ frame. Quick, aggressive and efficient on the court, the Slovakian is one of the fiercest competitors on tour.

And Dominica is on a hot streak. Fresh off winning the grass-court Eastbourne title, she is on an eight match winning roll. One of the scalps she took was from Poland’s Aga Radwanska, in the quarter finals. And here they meet again for the fourth time this year. Radwanska defeated the Slovakian in three sets at Indian Wells, and Dominica won the last two encounters, also over three sets.

The world number three will come up with plenty of variety to throw Dominika off her rhythm. Clever angles, disguised drop shots, slices, and lobs will be used to keep the Slovakian guessing. Dominika will try to extend the rallies to produce scathing winners or to force the error of the Pole’s racket. We predict another close three sets, with Dominica continuing her impressive grass court run.

Carla Suarez Navarro is an intriguing old school throw back. Perhaps its the closely cropped hair, or the use of tennis wristbands. Or perhaps it’s the one-handed topspin backhand, a rarity in today’s era of women’s tennis. So rare that it’s likely the only one left in the women’s top 50. The Spaniard is one of the more underrated players on tour, often making her way through to grand slam quarter finals, well below the radar.

But her fourth round clash with former champion, Venus Williams will definitely be on show. Having had many previous encounters, the two know each other’s games very well. They’ve played six times over the last seven years, each winning three matches apiece.

Astonishingly enough, this is Venus Williams’s nineteenth WImbledon campaign. The run hasn’t been easy so far, with a third round match that went the distance. Venus finally came through against unseeded Daria Kasatkina in the third set, at ten games to eight. In her match up with Carla, Williams will aim to power past and hit through her opponent. Pushing Carla far behind the baseline and keeping the rallies quick and deep would be the smart tactic for the American.

Suarez Navarro however has enough variety to her game to trouble Williams. She can absorb the power of Venus, move quickly through the court cracking both backhands and forehands.Though she has always preferred (and played better on) clay and hard courts, this year has seen a marked improvement in her grass court game. Her run at Birmingham was stopped in the semi finals by eventual winner, Madison Keys. Suarez Navarro has never beaten Venus on grass. But we’ll go out on a limb and peg her to win this one in a tight three setter.