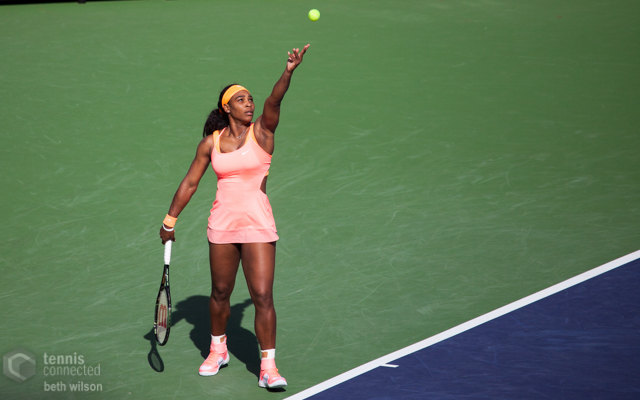 Welcome to Tennis Elbow, the column that looks back on the week that was in the world of tennis. This week, Charles Blouin-Gascon makes a series of predictions for the upcoming season.

It can be difficult to find ways to write a few hundreds of words about tennis if and when there were no matches played in the previous week, especially if a column is supposed to recap the previous week’s actions. That’s why we sometimes pull rabbits out of our hats: we wouldn’t dare cheat our readers from the chance to read us, so we figure something out. For the third year in a row, we start the year with our wonky predictions.

Please keep in mind that these are meant to be wonky by design; we don’t expect to get most of them right.

Novak Djokovic will not repeat his 2015 season

Bad news, folks: there’s no way the best player in the world can up the ante once more. While my colleague Parsa Samii is on the record predicting a calendar Slam for the Serb in 2016, I temper my expectations. Oh sure, a season ago we thought there was no way that Novak Djokovic could ever top his fabled 2011 season but this time it’s true. The only way that he could is if he wins all four Grand Slams of the season. Making such a bold claim is too much, even for these wonky predictions.

I’ll keep throwing this one out there, because not having won the French Open is probably the one thing, if there is any, keeping Djokovic from claiming a spot as one of the true legends of the sports and one of the five or six best players ever.

Wouldn’t it be great if the one man Djokovic beats in Paris to cement his standing as one of the greats were the Ultimate Warriors Rafael Nadal?

But much to his dismay, it will not be the one he wants.

…But it will not be in singles

When Roger Federer announced his 2016 schedule, what was most noteworthy was his decision to compete in Rio in mixed doubles with Martina Hingis. I don’t really know who they’ll compete against, but I like their chances. On the other hand, this would mean that the Olympic singles gold medal would remain the one prize that continues to haunt Federer: he’s won everything except that.

Here is my tentative 2016 schedule. Happy holidays and thanks for all your support! ????????? pic.twitter.com/b3TtZCmYQh

Since turning pro in 2008, the Canadian has been on an upward trajectory, steadily but surely progressing. He hit a little bit of a wall in 2015 and has decided to more or less replace Ivan Ljubicic for Carlos Moya on his coaching staff; he’s now at 14 on the ATP World Tour rankings, but a place inside the Top 10, or even Top 5, can be his.

Borna Coric is the “next big thing” of today

The young Croatian must prove that he’s not just a youngster with plenty of potential, but that he can achieve the results to fulfill this potential. I think he’s up to the task.

How about Andy Murray?

I’m actually asking you the question. I just don’t know what to make of Andy Murray in 2016. He’ll be fine, I guess—but don’t ask me to specify what that will look like.

Just as proof that Serena Williams is the all-encompassing force in women’s tennis, here’s a trio of predictions on the World No. 1-ranked player.

In the modern era, no player has won more Grand Slam tournaments than Steffi Graf’s haul of 22. Second on the list with 21, the younger Williams sisters seems destined to pass the great German.

By the end of the US Open in 2016, Serena Williams will be 35 years old. She will retire at some point.

Eugenie Bouchard settles on being a perennial Top 30 player

This is assuming that the Canadian does come back to the sport she so excelled at in 2014. Maybe she’ll never fulfill the visions of grandeur everyone had for her when she was running through just about everyone on the WTA Tour, but it’s fine. She can still be a very good, at times great, player.

Why not? Belinda Bencic is still just 18 years old and is coming off a 2015 season where she won twice in Eastbourne and Toronto and reached three other finals. If she could conquer the Rogers Cup in Ontario so quickly, what’s stopping her from winning on the biggest of stages?

And if it’s not the young Swiss who reigns over the WTA Tour when Williams has retired, why couldn’t it be the Spaniard? She turned pro in 2011 but only really broke through in 2014; since, she’s made two French Open quarterfinals and one Wimbledon final. If you think that means her game is well-rounded, it’s because it is: she’s ranked No. 3 in singles and No. 16 in doubles.

I mean, this isn’t likely to happen: Simona Halep trails Serena Williams by 3,885 points… but maybe when the latter retires?

Novak Djokovic finishes the year at No. 1 yet again

Hey, I’ll keep running with this one until I’m wrong.