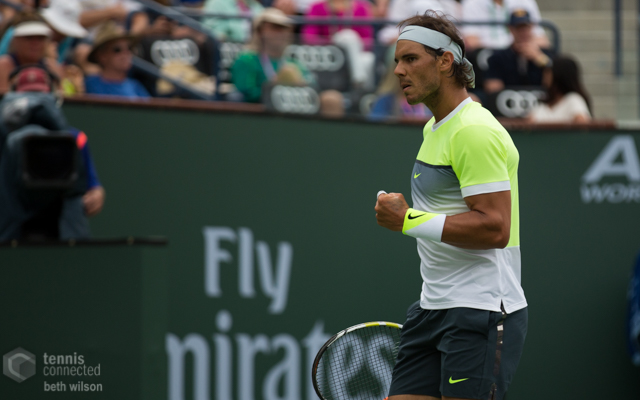 He’s still Nadal in the sense that he remains as popular as ever. Before his matches, tennis fans at Uniprix Stadium amass near the players’ entry, if for no other reason than to see their favourite player as he walks by on his way to Centre Court.

They take pictures too, because there’s nothing else they can do since everyone is cordoned off as authorities have made a sort of corridor for the players to walk through. Just a chance to get a glimpse of the Spaniard is enough for most to stand still, shoulder to shoulder with those around them. It’s chaos, and no one can move, so much so that if your seat happens to be at the other end of the stadium and across from the human corridor, well tough luck because you’re not going anywhere for a little while.

It’s chaos, and it sucks mightily, but I mean, it’s Nadal. So it doesn’t quite suck that bad.

Nadal is still Nadal in the sense that when he’s introduced ahead of his third-round match against qualifier Mikhail Youzhny, he’s still greeted by nothing but loud, loud cheers. Maybe that’s related to the last point, but it’s not just that Nadal is so popular.

Still, he remains a sort of rock star. It’s like, you’re there at the Rogers Cup and you don’t just clap your hands to greet him; you cheer and scream too. Because it’s as if you just can’t believe that you’re there and, you know, so is Nadal, who is about to play tennis. I mean, Nadal. Holy hell!! Right??

Put it this way: you were there for Novak Djokovic’s first match in Montreal this week against Thomaz Bellucci and no one cheered as loudly as they did for Nadal tonight. Why? Because Djokovic isn’t Nadal.

This season, Nadal is so far removed from his typical ranking of No. 2 or No. 3 and rather stands all the way back at No. 9. At the 2015 Rogers Cup, the 29-year-old is seeded seventh, but it’s more than that. The best way is to document Nadal’s problems this season is to say that he couldn’t win Roland Garros—and worse, that he was utterly overmatched against Djokovic in the semifinal.

And in the third round of the Rogers Cup, the Spaniard had all the difficulty in the world to put his opponent away in two identical sets of 6-3 and over 1:41 of play. “I think I played some good shots in the important moments,” Nadal told the reporters after his win. “I saved some good moments, I served well, and I played well.”

But if Nadal only converted three of 10 break points, it’s in part because of a spirited effort from the veteran Youzhny. At 33 years old and ranked No. 107, the Russian is far from the level of play that once had propelled him to a career-high of No. 8 but he’s still battling after 17 years on the ATP World Tour. (And he still has that wonderful one-handed backhand of his.)

This Rogers Cup could do wonders for Youzhny’s self-belief moving forward, as he adds two wins to his meager haul of six up until this point. “His level of tennis is much higher than what his ranking says,” Nadal said of his opponent. “If he can play like this, for sure he will finish the season in a higher position in the rankings. No doubt [about] that.”

But because he is still Nadal, he still beat Youzhny—regardless of what a great narrative it was to see the Russian do well this week in Montreal. Nadal may be a bit diminished, but he’ll still win a match against a qualifier like a Youzhny in the third round of a Masters 1000 event more often than not.