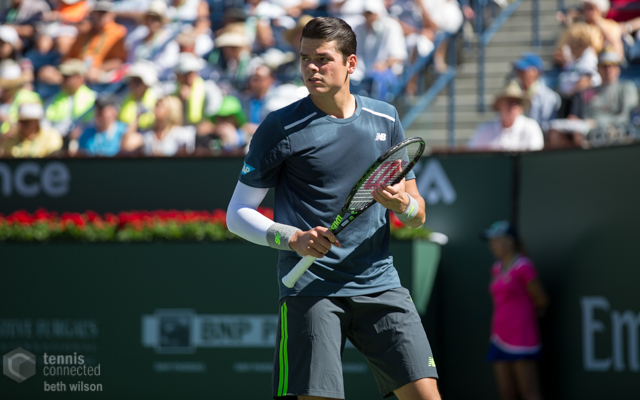 The doomsday scenario most had feared and predicted turned out to be much ado about nothing as for once, Montrealers got the last laugh over rain.

Oh sure, it still rained, plenty even—as much as 70 millimeters in Montreal in over 24 hours—but all that matters is tennis. Right?

Because on August 11, tennis fans in attendance at Uniprix Stadium got the full slate that they deserved. Sure, the matches started after a two-hour-ish delay because of the rain, but in the grand scheme of things and considering that it was supposed to rain through the day, uninterrupted, until 8 p.m. local time? I’m sure tournament director Eugene Lapierre will take it.

You take it as well. The two-hour rain delay meant that by the time you arrived at Jarry Park around 6:45 p.m. the match between Novak Djokovic and Thomaz Bellucci, scheduled for much, much earlier, had just started.

The No. 1-ranked Djokovic enjoyed a workmanlike win over his Brazilian counterpart, winning 6-3 and 7-6(4), before going into “Operation Charisma” right afterward: he conducted his entire post-match interview en français and wrote “Bonsoir Montreal <3 J” on the camera lens. “The match could have gone either way, honestly, especially in the second set,” Djokovic said in his interview afterward. “So that’s what I take out of this match, you know, the ability to play my best and stay calm in the right moments and overcome this tough challenge.”

This was a more eloquent answer from the Serb, who had only managed an “Easier said than done” when RDS’s Hélène Pelletier had asked him about that right after his win—time gives someone the chance to reflect.

And few are as good as Dr. Ivo at that game. Against the Canadian, the Croatian was more than willing and happy to play efficient and unexciting tennis en route to a 7-6(1) and 7-6(1) win. Karlovic was more than happy and willing to kill any kind of rhythm to the match. To render the home crowd a non-factor. Raonic praised his opponent after the match. “He was playing a little bit better than I was. You sort of saw that difference in the tiebreaks,” he said. “I gave away a few too many free points.”

This style of play has served the 36-year-old Karlovic well, as he’s amassed six career titles and over $6 million in prize money over what is, so far, a 16-year career.

Karlovic would rather play a match with as few rallies as possible. Or put it another way: Karlovic is fine with rallies, but he’d prefer that they happen during his opponent’s service games. On his own, he would rather hit a few aces—22 against Raonic, including the 10,000th of his career—and call it a day. “I was hitting forehands unbelievable. I was running around. I mean,” Karlovic said after his win, “everything was going my way.”

Because of that, the pro-Raonic crowd was about silent throughout, right up until their favourite had to save three break points in the second set as he served down 2-3. Raonic impressed his opponent during those points. “I had opportunities to end (the match) earlier, but he just did unbelievable on those break points,” Karlovic said. “I had maybe one chance. Every other ball he hit was [an] ace or [a] winner forehand.”

How did Karlovic follow up this sequence? With a service game won at love that included an ace, two service winners and a whopping four-shot rally that ended on a long Raonic miss.