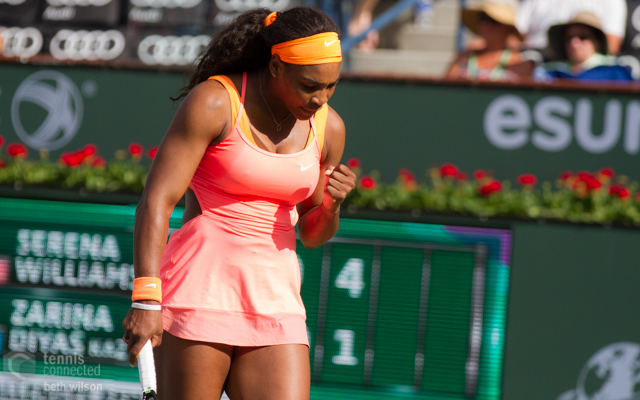 Welcome to Tennis Elbow, the column that looks back on the week that was in the world of tennis. This week, Charles Blouin-Gascon recaps the 2015 Wimbledon Grand Slam.

And then there was one.

Serena Williams started the 2015 season as the favourite at the Australian Open, much like she has at just about any point in her career. She won the year’s first Major, much like she had five prior times already. And much of the season has unfolded following this same script, with the best player in the world winning four tournaments.

Most importantly, among the four titles she has won this season are the three first Grand Slam tournaments of the season. After Maria Sharapova in the Australian Open final, and Lucie Safarova at the French Open, it was Garbine Muguruza’s turn to fall against the younger of the Williams sisters in two sets of 6-4 at Wimbledon.

Williams was far from perfect in the final, starting slowly but finally emerging with the win. “It feels so good,” she said after winning. “It’s been a little while. I didn’t even know it was over, she was fighting so hard.”

Fighting so hard, Muguruza certainly did—odds are that she will win a Wimbledon title or two before long; Williams said as much in her comments after the match. Indeed, the future is bright for the young Spaniard but Williams’s present is right now. And it’s as bright as ever.

Only once has Serena stepped on a court and lost this season, for the Mutua Madrid Open semifinal against Petra Kvitova. She has two other losses in her track record in 2015, but they don’t show up on her results page on the WTA Tour website because they were walkovers.

She has lost once in 2015, but she hasn’t lost at a Grand Slam in over a year. Yes, Williams is currently riding a 28-match unbeaten streak at the four most prestigious tournaments in the world, but again she has been far from perfect during the streak. Nine times she has needed three sets to win, and perhaps this is where her incredible and unparalleled experience has helped her most: per Greg Garber of ESPN, Williams won the third set by an average score of 6-2 over these nine matches.

If you need seven wins to win a major title, then this means that this Wimbledon title gives Williams the second “Serena Slam” of her career, only this time she will look to win a fifth major tournament in a row. Unlike her first Serena Slam in 2002 and 2003, she has a chance to win the four Grand Slams of 2015, because it’s the first time she has ever won the first three majors in a season. Quite apropos, she said that, “I’m having so much fun. I never dreamed I’d still be out here.”

We’ve already praised her for so many things over the years, but let’s also praise her efficiency: a win at the US Open at the end of the summer would tie her with Steffi Graf for most Grand Slam titles in history with 22, and give her the first calendar-year Slam since Graf in 1988. And it would also be the 69th overall title of her career, still “just” good enough for fifth in history: Serena Williams wins and has won tournaments, yes, but she mostly and especially wins Grand Slams.

Look at all that she has already accomplished this season and in her career all around the world. Now, she just needs to bring it all home.