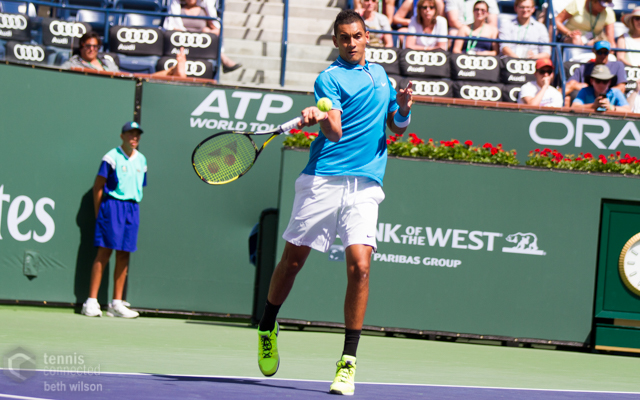 Welcome to Tennis Elbow, the column that looks back on the week that was in the world of tennis. This week, Charles Blouin-Gascon previews the third Grand Slam of the season.

The world of tennis has descended upon the All England Lawn Tennis and Croquet Club for the prestigious Wimbledon Grand Slam. Already.

Every year is the same: the Barclays ATP World Tour Finals seem so far away in January but before you know it, you look up and Rafael Nadal has already crushed someone’s dreams at Roland Garros and Wimbledon is here. Switch Stanislas Wawrinka for the Spaniard for this season, but the point remains: time goes by so quickly.

The same thing can certainly be said about life in general: what once seemed so far away will arrive before you’ve really had time to realize that it has. Oh, you’ve graduated from elementary school? Congratulations, you’ll choose your major for college before you know it.

Time offers the promise of potential for young tennis players, but you have to work hard to turn potential into actuality: otherwise, you’ll find that the Wimbledons just seem to be coming and going, and you keep getting older, without getting better.

As we’ve done for Roland Garros, let’s the younger players to know at Wimbledon, because they could surprise us this year.

Feat of arms: Ever since Canadian Eugenie Bouchard has taken the WTA Tour by storm, it seems like we’ve reassessed the typical career trajectory and script of young players. Most don’t simply jump in and win matches at the Grand Slam events; they tend to first win at the relatively lower tournaments, and it’s certainly been the case for Belinda Bencic.

And yet, she does have quite one notable feat of arms: a year ago at the US Open, she enjoyed her first real breakthrough, reaching the quarterfinals and reminding everyone that the future of women’s tennis didn’t simply belong to Canada. Jump ahead to this month, and you’ll find a player who has reached two finals on grass and has captured the Eastbourne International title by beating former No. 2-ranked Agnieszka Radwanska in the final.

Feat of arms: You say and think that Ana Konjuh is young and can’t drink champagne yet, and while this is certainly true, she does happen to have made her entry into the Top 100 in October of last year at age 16. So Konjuh is young, yes, but that hasn’t stopped her so far, including at the Nottingham Open where she became the youngest champion on tour since 2006.

The Croatian is great and has plenty of potential, as evidenced by her winning the 2013 Australian Open and US Open junior events and becoming the No. 1-ranked juniors. But she’s already started turning that potential into concrete results.

Feat of arms: It would be silly to expect anything from Laura Robson, who enters the main draw of Wimbledon with a wildcard after a layoff of a year and a half due to a wrist injury. We simply mention her because 1) she is British, 2) she has been through a lot and we’d like to see good things happen to her, 3) she has received the kind draw for this to be possible and 4) we have mentioned Eugenie Bouchard earlier, and Watson and Bouchard still aren’t friends.

Gangnam Style seems so long ago :(.

Feat of arms: Nick Kyrgios may not be the most talented of the new crop of players on the ATP World Tour, though I personally would pick him, but one look at him on a tennis court shows that he certainly is the most boisterous. He’s the most controversial too, reminding us of this when he admitted last week that he doesn’t love tennis and prefers basketball.

Mind you, he says this on the eve of his follow-up to his first breakthrough, when he beat Rafael Nadal and Richard Gasquet and reached the quarterfinals of Wimbledon a year ago. And still, all is right for the most marketable Australian athlete.

Feat of arms: Hey, speaking of youngsters who have defeated Nadal… Borna Coric already loves “His Wimbledon” experience, and has the overall game to excel on any surface and a style of play that has drawn comparisons with the No. 1-ranked Novak Djokovic.

Coric is the star of tomorrow, so long as you admit that tomorrow has already arrived. The draw hasn’t been especially kind for the Croatian, with Andreas Seppi likely on his path in the second round, before Andy Murray in the next match. A tough ask… then again, Coric has already beaten Murray once.

Feat of arms: Let’s end with the 19-year-old South Korean, who has enjoyed his greatest result at the Grand Slam level this week at Wimbledon simply by making the first round of the main draw. Chung mostly focuses on the Challenger Tour, but his future is bright and, if not for a silly, silly mistake, his breakthrough at a major might have arrived earlier. He received a wildcard entry to the qualifying draw of the French Open from the Roland Garros officials despite being ranked No. 69 at the time: he and the Korean tennis association had missed the entry deadline for the tournament.

That’s right—Chung had become so good so quickly that he hadn’t anticipated he could compete in the French Open. That’s #humblebrag if I’ve ever seen it.