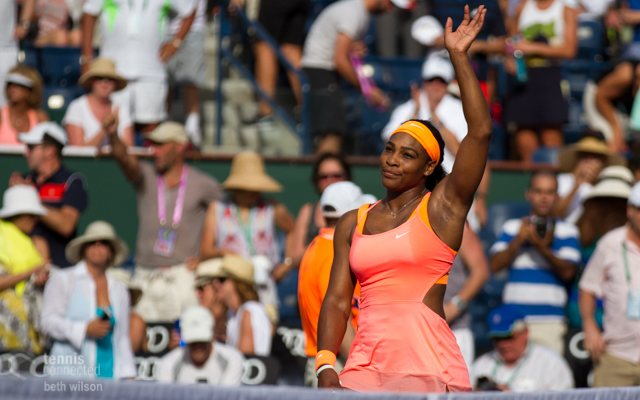 Welcome to Tennis Elbow, the column that looks back on the week that was in the world of tennis. This week, Charles Blouin-Gascon asks an important question.

Can Serena Williams win the calendar Grand Slam this season?

This is another way of asking whether she can complete what she is already halfway through, after winning last month’s French Open, and win the remaining two Grand Slam tournaments of this season to put her career total at 22 and on par with the great Steffi Graf. The quest continues in a week when the tennis faithful descend upon the cathedral of the sport that is the All England Lawn Tennis and Croquet Club.

I’ll spare you the suspense and confess that yes this is another column praising the younger of the Williams sisters. But to say this isn’t right either, because it’s much more than that. What’s left to say about someone, after all, when everything has already been said?

Maybe you haven’t heard, but this Serena Williams is fairly great at tennis. She will turn 34 at the end of September and is still thriving on the WTA Tour. Williams has lost just once in 33 matches in 2015, and even that one loss doesn’t actually count: it came in a walkover in the third round of the Internazionali BNL d’Italia against Christina McHale.

Considering her record this year, and despite her age, Williams has to be seen as a clear favourite for the remaining two majors. It would simply meet the standard of excellence she’s long ago defined for herself: winning Wimbledon would guarantee her at least three majors this season, something she has already accomplished once, all the way back in 2002 when she was much younger. A Wimbledon win would also mean that she would hold all four Grand Slam tournaments at once yet again, a feat she is the last player to manage 12 years ago. So really, what’s a calendar Slam?

Williams’s journey starts in Wimbledon at tennis’s greatest cathedral, where she’ll likely have to overcome defending champion Petra Kvitova if she hopes to add a sixth title at yet another major. After a win there, Williams will have all the pressure in the world when she heads to the US Open, her home tournament where she has felt home only very recently: of her six US Open titles, three have come in the previous three years.

This potential calendar Slam would give Williams the ultimate trump card in the debate over which player is the greatest of all time. It would be more impressive than Martina Navratilova’s six Grand Slam titles in a row, more impressive than Steffi Graf’s 13 straight finals and 22 major titles, and 89.74 per cent winning percentage at majors, and more impressive than Chris Evert’s 34 overall major finals.

With a calendar slam, Williams would have accomplished something none of her historic peers has done. This basically describes her entire career—accomplishing what no one else has—so maybe we should expect those two wins. (Even though, at the beginning of the season, I certainly wasn’t expecting anything from her.)

It’s simple really. Win the last two Grand Slams of the season and become the best ever. She’s done it once already: this shouldn’t be too difficult.