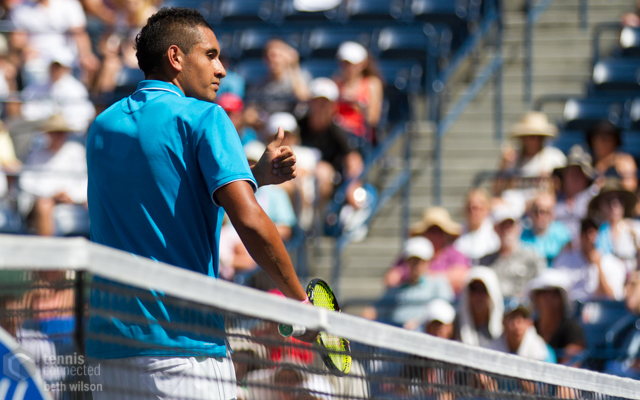 Welcome to Tennis Elbow, the column that looks back on the week that was in the world of tennis. This week, Charles Blouin-Gascon recaps the first week of the 2015 Roland Garros.

Everything seems to have unfolded right according to plan so far in this 2015 Roland Garros tournament.

On the women’s side, favourites like Serena Williams, Petra Kvitova, Ana Ivanovic and Maria Sharapova have been faring well and seem to be well on their way to making a star-studded final four. (Or maybe not, in light of today’s results…)

On the men’s side, there have been fewer overall surprises: in the fourth round, the only unseeded players have been Jack Sock, Jeremy Chardy and Teymuraz Gabashvili.

But this count could have been higher.

Over the weekend, the three youngsters I had deemed worthy of perhaps a surprise or two at this Roland Garros had their chance to deliver just that; and well, they couldn’t quite pull it off, as Thanasi Kokkinakis, Borna Coric and Nick Kyrgios each lost in straight sets.

The two Australians were going up against, respectively, Novak Djokovic and Andy Murray and this means that the knee-jerk reaction is probably to condemn Coric for letting an opportunity pass by, considering that he was matched up with American Jack Sock and lost 6-2, 6-1 and 6-4. But it’s expecting a lot from an 18-year-old, even one as precociously talented as Coric is, to expect more than a place in the third round of a Grand Slam tournament. He had had his moment just a match earlier anyway, besting crafty veteran and 18th-seed Tommy Robredo.

Matched up against Andy Murray, Nick Kyrgios also had his moments in the third round. Namely, he certainly had one hell of a moment.

The 20-year-old ultimately lost pretty soundly against the Brit, losing 6-4, 6-2 and 6-3 on a surface that is far from his best. The future, which has very much arrived, is still very bright for the young Kyrgios, who has all the tools and the shots to be a champion.

Take this rally earlier in the year in the quarterfinals of the Australian Open.

As you see, Kyrgios is a showman and will go as far as his strong forehand can carry him…only if his emotions don’t betray him. Maybe that’s why my colleague Nima Naderi sees bigger and better things for Kyrgios’s countryman Kokkinakis.

What I like about Kokkinakis’ game over Kyrgios’ is that his demeanor is more + on court no matter the score. Nick gets flustered quickly.

The 19-year-old Kokkinakis appears to indeed be wise beyond his years, reacting with a grace and calm that is typical of older and more experienced players. Maybe Kyrgios can use his fire to rekindle his passion during a match, but you don’t need to pump yourself back up when you’re always even-keeled like Kokkinakis.

Djokovic also praised his young opponent after his win.

“He doesn’t have a huge firepower…but you don’t need one when you don’t miss”, “he doesn’t give you anything”, Kokkinakis on Djokovic.

Big, but not big enough, they say.

In the end, maybe the results of this first week at Roland Garros are the best thing we could have hoped for. We got a glimpse of the very bright future ahead of us, but it also didn’t compromise the very bright present.