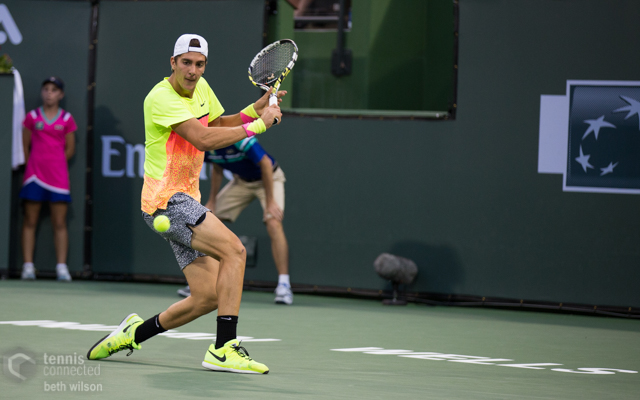 Welcome to Tennis Elbow, the column that looks back on the week that was in the world of tennis. This week, Charles Blouin-Gascon previews the 2015 Roland Garros.

Youth offers the promise of potential. It’s the best time in your life, your mother has told you, because it’s the one time in your life where everything that is possible seemingly really is.

It’s the case in tennis, too. A promising youngster will have his or her fans dreaming and saying aloud things like, “Oh he/she could totally be the new No. 1 player in the world. Look how great he/she is right now, at 16/17/18.”

Yes, younger people, and players, have all the potential in the world, but the tricky part is to turn this potential into actual and concrete results. And with concrete results come heightened expectations, which somehow only sets the bar that much higher for players who often don’t have the mental tools to deal with these.

That being said, who are the young players to know because they could surprise at this year’s French Open?

Feat of arms: The tall Swiss has a career record of 105-59 and one doubles title, at the Prague Open this season, but her big breakthrough came a year ago. She became the youngest player since her countrywoman Martina Hingis to reach the quarterfinals of the US Open and in doing so, notched the first two wins of her career against Top 10 players in defeating Angelique Kerber and Jelena Jankovic. She was deservedly named the WTA Tour Newcomer of the Year.

Feat of arms: The Croatian turned 17 fairly “recently,” at the very end of December 2014. As such, we should probably temper expectations for Ana Konjuh, at least for the 2015 season. And yet! Oh yes, despite her young age, Konjuh is part of the Top 100 and notably scored a big win over fellow promising youngster Belinda Bencic at the Prague Open this year. Konjuh’s titles at the 2013 Wimbledon and US Open juniors’ events hint at a whole lot of greatness in the near future.

Feat of arms: I know, she’s maybe not so young at 21 years of age but she does offer good potential still. She has been playing, and winning, often in China: of the 13 singles finals and the 14 doubles finals she reached, only three in total occurred outside of Asia. Still, Zheng Saisai is a member of the Top 100 and is already quite the accomplished doubles player. If the reader happens to know her from one performance and one tournament, it’s from a semifinal at the 2013 Australian Open; that or a quarterfinal at the 2013 French Open.

Feat of arms: It’s mostly in 2015 that Thanasi Kokkinakis has made a name for himself. Sure, there were the two Australian Open and US Open juniors’ finals he reached in 2013, but come on. This season, the young Aussie broke in the Top 100 for the first time, perhaps being the first to contribute to Ernests Gulbis’s 2015 season of hell, while also making the fourth round at Indian Wells after receiving a wild card entry for the tournament. Before long, he won’t ever need these wild card invitations.

Feat of arms: Remember that thing about potential? Borna Coric will turn 19 only at the very, very end of the 2015 season in November but already boasts a strong ATP World Tour ranking. His 2013 season was a banner year for him, as he made the semifinals in the juniors for the Australian Open, the French Open, the quarterfinal at Wimbledon and won the US Open and became the No. 1 junior in the world. Coric’s best at a Grand Slam event is a second round at last year’s US Open; that he qualified for the main draw makes me think that maybe, just maybe, he could eventually become the best player on tour.

Feat of arms: Or if it’s not Borna Coric who replaces Novak Djokovic, then it might be this other young Aussie. We’d like to take credit for Nick Kyrgios’s excellence after predicting great and grand things for him in this very space, but we’re far too humble for that. We said in our season preview that we thought he would make a Grand Slam final in 2015 and while the French Open is not the event where his style of play is most likely to translate to success, he remains promising. Kyrgios is seeded at a major tournament for the first time in his career, which is the next normal step after making the quarterfinals of last year’s Wimbledon and this season’s Australian Open. If you’ve followed tennis recently, you know that Kyrgios beat some guy named Rafael Nadal on the way to the quarterfinals at Wimbledon last year.