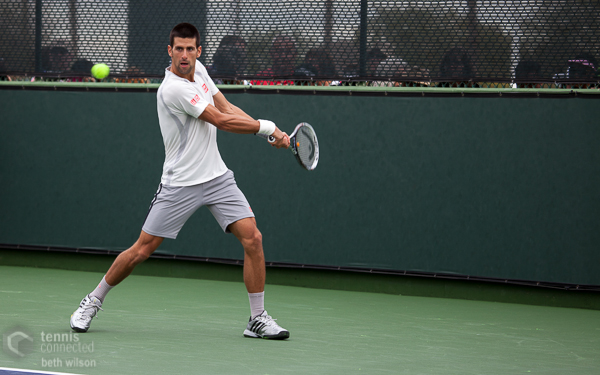 Welcome to Tennis Elbow, the column that looks back on the week that was in the world of tennis. This week, Charles Blouin-Gascon recaps Novak Djokovic’s win at the 2015 Australian Open.

Novak Djokovic started the 2015 season as the undisputed No. 1 player on the ATP World Tour and if the first Grand Slam of the season is any indication, the Serb has solidified his hold on the position.

In taking the 2015 Australian Open, Djokovic won 20 of the 24 sets he played—he lost one in the final against Andy Murray, and another two against Stanislas Wawrinka in the semifinals because he seemingly always loses two sets (or more) against the Swiss.

By now, surely you’ve heard that this win gives the Djoker a fifth title in Australia and an eighth Grand Slam title overall. The former leaves him tied for eighth in history while only Roy Emerson has more than his haul of five Aussie titles. You know both of those things by now.

The win assures Djokovic of at least a modicum of success this year, even if everything goes wrong the rest of the way.

Not that this doomsday scenario is very likely, mind you. The 27-year-old had a great 2013 season and will need excellent play to finish another season as the year-end No. 1 player, but it’s feasible. He’ll have to defend his Wimbledon title as well as four Masters 1000 events, starting next month in Indian Wells and Miami, and his Barclays World Tour Finals in November.

But sure, even if the sky falls down on him the rest of the way, Djokovic’s floor of one Grand Slam title will be no worse than the fourth best result in 2015. That’s the part where you say, “Not too shabby.”

Entering the year, it was only right to give Rafael Nadal and Roger Federer the benefit of the doubt that they would overcome, respectively, injury and age and Father Time, but it’s a trickier position to defend after this Australian Open. Maybe Nadal and Federer didn’t look injured or old, but they didn’t look right either. They looked, well, unmotivated in Melbourne and a lack of motivation can be hard to overcome. If it happens just at the beginning of the season, then why would they eventually be motivated in June or July, amidst the grueling stretch of the season and especially considering that they’ve both already accomplished all there is to accomplish?

(At this point, I’m tempted to declare that Djokovic should be the favourite for Roland Garros regardless of whether/how Nadal plays in Paris. But of course, May is still very far away and I’ll take every minute I have before potentially making a fool of myself and picking against Nadal on the French clay.)

If the current golden age of tennis is truly over, then what might come next could be something that delights all of Djokovic’s fans. After the end of this golden age, the man would still be in his prime and his adversaries would be few and far between, and definitely a notch below the combo that was Federer and Nadal.

Murray looks to be back to battling his inner demons, as much as his Twitter trolls, and when he’s not it’s his soon-to-be-wife Kim Sears who does it for him. At 27, Murray is also technically right in his prime—though after this Australian Open, that doesn’t seem as obvious, or as good, as Djokovic’s.

Otherwise, maybe it’ll be Kei Nishikori who challenges Djokovic and, when the Serb retires, who rules supreme. But he appears just a tiny bit green behind the ears and a year or two away. Beyond him, or maybe Nick Kyrgios though maybe let’s let him turn legal first, there aren’t many clear choices currently on Tour.

You might say that we’ll cross that bridge of life post-Nadal and post-Federer when we get there. I’ll say that maybe we already have.