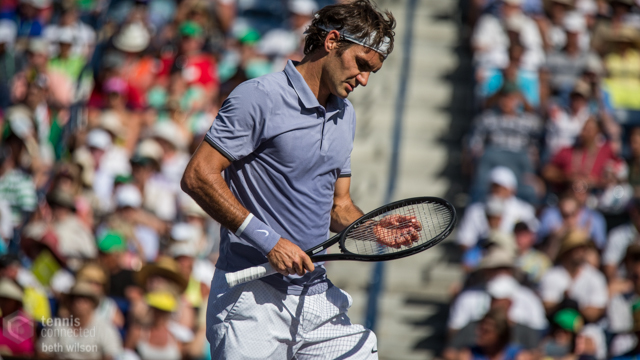 The ATP young guns met their match against experience when the “old guard” of Novak Djokovic and Roger Federer halted them at the semi-finals held on Saturday.

First into the firing line was Grigor Dimitrov, who earlier stunned defending champion Andy Murray to set up his encounter with Djokovic. Given that he stunned the former World No. 1 in the past he had every reason to believe he could again but the first advantage went to Djokovic who edged the first set.

Credit to Dimitrov, he stuck with it and was rewarded with a break and proceeded to keep the pressure on the World No. 2 to take the second set comfortably. It was enough o give him a bit of impetus to keep on pushing, despite slipping and sliding, glaring accusingly at times at the dusty back of the court.

Dimitrov is nothing if not tenacious and for a first time semi-finalist, he acquitted himself well in the next two sets as they went to a tie-break with the deciding one a real thriller, as Djokovic finally closed out a 6-4 3-6 7-6(2) 7-6(7).
“In the semis of Wimbledon playing a future star, he deserves respect, it was a tough match overall,” said Djokovic, who had to save three set points in the fourth set tie-break when he trailed 3-6. “The fourth set could have gone either way. I started well, was up a set and a break, points for double break. But like I did against Cilic [in the quarter-finals], I allowed him to get back in the match. Overall I’m really glad to reach another Wimbledon final.

“Dimitrov has quality shots, especially his running forehand, and great touch. He plays equally well when he’s aggressive and when he’s defensive. That’s part of his game that he has improved immensely in the past six to eight months. It was a good win for me. I’m really glad to be part of another entertaining match. Now I’m looking forward to the championship match.”

After the match, Dimitrov said, “Of course I’m frustrated. I came out on the court to win. I think I had a pretty slow start, but at some point I think I got my act together and I was really playing good tennis. You never know what would have happened if I had taken that fourth set. I think at the same time I had my momentum. It’s just he came out on top today, so all the credit to him.”

So over to young gun number two and Milos Raonic had high hopes of turning the tide against Federer, but the Swiss was too much for Milos Raonic as he ended the young gun’s hope for a place in the Wimbledon men’s final in straight sets, 6-4 6-4 6-4

After the match, he said: “It’s going really well. My game’s back where I hoped it would be, you know, from one year ago. Things were difficult all of last year, most of the year, so I’m happy I worked hard off the court, you know, to get myself back into shape and back into contention for tournaments.

“This year’s been very solid. I’ve reached a lot of semis and finals. I also got two titles already. So I think that really gave me confidence to believe that I could go a step further.”

Federer has lost just one set, when he faced compatriot Stan Wawrinka in the quarter-final and faced just one break point against Raonic.
“[It took] big concentration [today],” said Federer. “I had to really focus every point. I had to be very careful on my service games. I knew there would only be a few chances on return. I was unbelievably effective.”

With a head to head lead of 18-16, he knows the final is going to be a different matter against Djokovic who has lost in his last three Slam finals and will want to turn that stat around.

“We always play good matches against each other,” said Federer. “We’ve played each other a lot the past six months, and it’s gone back and forth a bit. Novak is a great champion; he’s used to these occasions. He’s won here before and knows how to get it done. I hope it’s going to be a good match.”

The Men’s final will be played on Sunday at 2pm