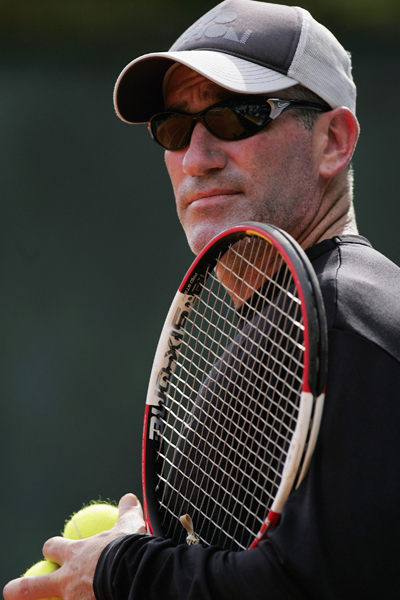 For the podcast version of this interview click here

Former world No. 4 Brad Gilbert, who captured 20 career ATP World Tour titles throughout his successful career, continues to be one of the most recognizable analysts and voices in today’s game.

In the following interview, Gilbert shared his views on the first quarter of the year, his thoughts on the different court surfaces, and his predictions on the future superstars of the sport.

As always, Gilbert brings his unique and informed blend of analyzing to the ATP World Tour.

Q: Summing up the first quarter of 2010, how would you rate the top four players in the world and their level of play?

A: It’s been an interesting start to the season starting with Roger Federer getting the crowning jewel in Australia. Other than that, it’s been pretty wide open considering the top four players have dominated the game previously.

You look at tennis a little bit like a horse-race—we’re at the quarter point of the season where a lot will transpire between Monte Carlo and Wimbledon. This is where you will see a player’s season kind of get going.

Obviously Rafael Nadal becomes a fish to water on the clay. It’s amazing that he hasn’t won a tournament in 11 months.

At every level what’s amazing is a players’ confidence. For Nadal it’s about feeling physically good. He’s made a bunch of semifinals and quarterfinals and he’ll be looking to get his feet under the clay and that winning feeling back.

Novak Djokovic played really well last year on the clay, and he’ll have a lot of ATP World Tour points to defend. He’ll be looking to be in great form.

Two guys that I was looking to do a lot of damage this year, who are injured at the moment are Juan Martin del Potro and Nikolay Davydenko. Again, that has added to the field being that much more wide open.

I expect Roddick to have a good run at the French Open this year, and at the Madrid Masters 1000 considering the conditions. Roddick is playing as well as I’ve seen him play since Wimbledon of last year.

Q: Comparing the game with 10 years ago, what would you say is the biggest technical change you have seen players make?

There hasn’t been anything revolutionary from a technical standpoint, from backswings to forehands.

Nadal has changed string recently; he was playing with an older string before. I’ve been using his string, and you can swing out more on the ball and it stays in.

Advancements in string technology have allowed for a more level playing field.

Q: If you could go back and tell any player of any era to perform differently in a match, who would it be and why?

A: Well, that’s a little hypothetical, and I would just go back and change a few of my results. I guess because you can’t do that, I would like to see on-court coaching in the men’s game. I think it would be much more exciting for the fans, and TV. Because you can’t change results—I would change my losses, and I would definitely like to see on-court coaching.

In 1998, they tried it in two tournaments where I was coaching Agassi, and he won both tournaments. It would definitely be an exciting addition to the events, and it’s worth experimenting with.

Q: Which player from the current crop of youngsters on the ATP World Tour would you predict has the biggest opportunity of dominating the game and why?

A: Well, that’s a tough word you said right there (dominating). It doesn’t happen always like this (Federer dominating) and we could see 10 years of parity coming up. The game is so strong, and to see someone like Federer or Nadal come up will be difficult. There is more depth and great players in the game than I’ve ever seen.

A guy could just pop up on our radar in the next few years and we could all just be overwhelmed.

I remember Agassi playing Federer in Basel, Switzerland in 1998, and Andre was already saying at that time that Federer would be tough. Usually at the time players are 17, you can see if they will be great.

You see Boris Becker, Mats Wilander, Nadal, Pete Sampras—they were all great when they were young. As a coach, you can see that type of talent at an early age.

Q: How would you rate the current pace of today’s court surfaces? Do you think they are playing slower, faster, or medium pace? How do you think different or unified surfaces benefit the status of men’s tennis?

A: The biggest change is for the better. In the 1980s the courts were much faster with faster balls. They’ve slowed down the courts a lot, and the balls as well.

The clay used to be heavy with slower balls. They defiantly made the courts more agreeable for all the players. The indoor surfaces are not as lighting fast, which has allowed for a more even playing field.

Overall they’ve done a great job with the surfaces. The clay is faster, the grass is slower, and the indoor surfaces are more even. Tennis is much better for it.

Q: If you could take any current stroke in today’s game and use it at your disposal, how would you incorporate the “Winning Ugly” method into the stroke?

A: I probably wouldn’t sleep, but if I had Agassi’s backhand that would be great. I’m 48-years-old and I’d probably still be playing with Andre’s backhand.

Or how about Roddick’s serve? That will keep you in the points all time. So if I had Agassi’s backhand and Roddick’s serve, I wouldn’t have time to sleep because I would be so happy.

Obviously having a serve like Ivo Karlovic wouldn’t hurt either.

Q: What would you deem your favorite ATP World Tour event during your playing career, and as a coach?

A: That’s easy, anywhere I played well. I had a lot of success in Cincinnati as a player and as a coach. I won there as a player, and with different players.

The San Francisco tournament, which was my hometown tournament, was always a favorite. I won there as a player and with a number of players. Winning my hometown event was great—as a kid you always want to perform well at home and take it seriously.

Believe it or not, I also play some of my best tennis in altitude. A lot of players didn’t like playing in altitude. My opponents would play bad and I would win ugly.

Q: Do you see yourself jumping back into coaching anytime soon, or will you continue to concentrate on your analyst duties?

A: I’m happy doing the TV right now. I do a little coaching with the kids at the house, and everything is going okay. I’ll be at the French Open next month to cover the event.

You never know, I might get back into coaching someday.

Q: If you could disclose a funny locker room, or players’ lounge story that no one knows about, what would it be?

A: You can’t be divulging locker room stories—that’s where they stay. As you get older, that’s what you miss the most. You tend to forget how much fun it is in the lockerroom with all of the players. It’s definitely an experience.

Most players have their entourages nowadays, and spend time in their groups to relax. Like I said, it’s an experience.

Q: Finally, how do you fancy the chances of the Oakland Raiders and Oakland Athletics this season?

A: Always on opening day you’re hopeful, but we [Oakland Athletics] gave away the first one with too many errors. It’s been a tough time in Oakland the past few years, but I’m hoping we can become .500.

In terms of the Raiders, we need someone who is ranked No. 80 in the world to start playing like they’re No. 5 in the world. It’s really going to be tough but I’m hopeful. The Raiders have lost at least 10 games per season in the past few years.