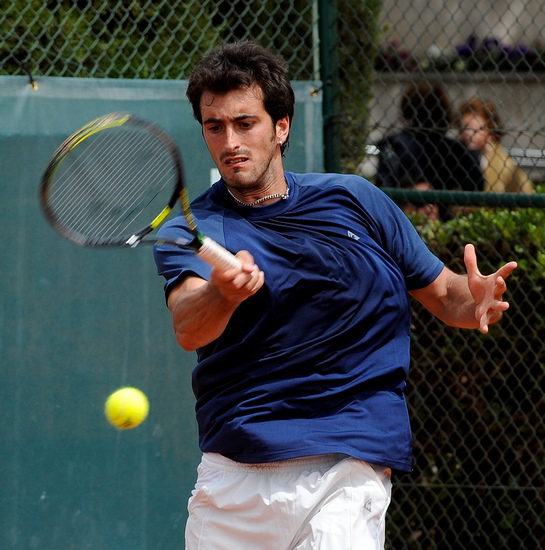 In a recent interview given to TennisConnected.com, world No. 62 Potito Starace shared his outlook on the upcoming season, his post career thoughts, his favorite locker room story, and finally his thoughts on the death of his good friend and Tour player Federico Luzzi.

Reaching a career high of No. 27 in the world in 2007, Starace is set to face Portugal’s Frederico Gil in first the round of the Qatar Open later this week in Doha.

Starace’s emotional and eloquent persona is exemplified throughout the interview.

Q: What are some of the goals you wish attain during the 2010 season?

A: I feel a lot better than last year. My main goal is to win my first ATP [World Tour] title and to get back into the top 50. To [hopefully] play [in] the Masters 1000 series events in the main draw.

Q: What factors of your game will you look (have you worked on) to improve most during the offseason?

A: Mostly the mental part and the physical part.

In the years before there was a big difference between my intensity in practice and in the match. Because of this low practice intensity I had often troubles to keep the concentration during the match, costing me some games where I simply wasn’t there.

This year I hope it will be better. Physically, together with Stefano Baraldo (my trainer since 2007) we have worked double sessions through the whole month of December, and I feel much stronger than I did last year.

Q: Your results this year have excelled more at the Challenger level than at the ATP World Tour level, what would you say is the biggest difference between the competition on the Challenger circuit and the main Tour?

A: This year I made the best results on Challengers and few good results on tour level. I think it depends on two factors: On the Tour events, if you check, I often lost to the future winner of the tournament, and I got to my best tennis during the summer, when most of the tour events on clay had ended.

I crushed [Juan Carlos] Ferrero in Umag in the first set, but it was 40 degrees and I didn’t keep up the rhythm in the third set. After that the clay tournaments had ended and I performed well in San Marino and in the events thereafter.

The level is completely different. In Challengers you have a few real players, the others have a regular level, there I win matches also on a really bad day. On tour events it is all real players, I need to be at 90 percent at least to win, and sometimes it is not even enough.

Q: What would is your favorite court surface and why?

A: It is clay. I was born on clay, grew up sliding, and it is my natural way of moving. When I slide I get more power out of the legs when I hit, and I am more harmful.

Q: When changing court surfaces, what would you consider the biggest change a player has to make in order to adjust?

A: The position. I can’t throw the energy well to the ground [on hard courts]. I am less explosive because I can’t slide. My legs are not spread out and I stand higher, although I force myself to stay down.

Q: What career highlight do you most cherish after being on the Tour since 2001?

Q: How did the passing of you good friend and fellow Tour player Federico Luzzi change your perspective on life and tennis? Did it make you want to give more on the court, or value the other areas which life has to offer?

A: His death has destroyed me. It has been too hard. We were closer than brothers; we had been sharing the same apartment for five years almost. No, I couldn’t find any motivation from his death, just a lot of anger and fatalism. I didn’t care about anything and it took me a whole year to get back some motivations.

Q: Have you given any thought to what you would like to take part in after you finish your tennis career? Is coaching or commentary a possibility?

A: I don’t know yet. Although I am 28, I am not thinking about it. I will stay in tennis for sure, commentating or coaching would be nice things to do, maybe commentating in the first place, in order to settle down at least for a few years…

A: Of course I am more motivated. I don’t feel the pressure, just a great disappointment if I don’t do well. This year I lost to [Albert] Montanes, but it was such a stormy day that it was impossible to build up a point or be aggressive. I was really upset afterwards.

When you do well, like when I beat [Juan Carlos] Ferrero on center court (2007), it is the payback for all the hard work.

Q: Finally, if you could disclose one locker room story that you would like to share with the public what would it be?

A: The nicest thing has been shared already! When I ask Novak [Djokovic] to imitate anybody, he is always able and he makes me laugh as hell! Some of his locker rooms performances have been published on youtube.