WTA World No.1 for 319 weeks and winner of 39 Grand Slam titles announces her retirement from professional tennis
American great played her last match at her 21st US Open, more than 25 years after making her WTA Tour debut
Among 73 tournament wins, Serena’s haul of 23 Grand Slam singles titles, won over an 18-season span, is the Open Era record
Leaves game as the only player to achieve a ‘Career Golden Slam’ in singles and doubles and as the prize money leader in women’s sports

ST PETERSBURG, FL, USA – The WTA today celebrates the extraordinary Serena Williams, who retires from professional tennis having secured her place among the greatest champions in the history of sports.

After playing her first professional match in qualifying at Québec City in 1995, Williams made her WTA main draw debut at Moscow in 1997. The following week, at Chicago, Illinois, the 15-year-old upset World No.7 Mary Pierce and No.4 Monica Seles before being stopped by fifth-ranked Lindsay Davenport in the semifinals.

Those results proved a sign of things to come: By the end of 1998, Williams was inside the world’s Top 20 and a Top 5 season finish in 1999 – the year she won the first of her 73 singles titles (Paris Indoors) and 23 Grand Slam titles (US Open) meant she was on her way to redefining the game.

Williams first ascended to WTA World No.1 as a 20-year-old on July 8, 2002 and went on to spend 319 non-consecutive weeks in the top spot. Only Stefanie Graf and Martina Navratilova have topped the rankings for longer and Williams shares with Graf a record streak of 186 consecutive weeks at the summit. Securing the Year-End WTA No.1 Ranking on five occasions, Williams posted 16 Top 10 seasons and in April 2017, at the age of 35, she became the oldest player to rank No.1 – 15 years after her first reign.

Title-wise, Williams captured at least one singles trophy 11 years running (2007-17) and was champion at 26 different events, including eight times at the Miami Open presented by Itaú, seven at Wimbledon, seven at the Australian Open, six at the US Open and five at the season-ending WTA Finals. In addition to her success at Miami, she won all the other biggest WTA 1000 events – the BNP Paribas Open at Indian Wells, the Mutua Madrid Open and the China Open at Beijing.

Williams also enjoyed tremendous success in doubles, winning 22 of her 23 titles with Venus Williams. The sisters were unbeaten in 14 Grand Slam finals and in the summer of 2010 jointly held the WTA Doubles World No.1 ranking for eight weeks. Serena’s first success at the majors actually came in mixed doubles, with titles at Wimbledon and the US Open in 1998, both with Max Mirnyi. 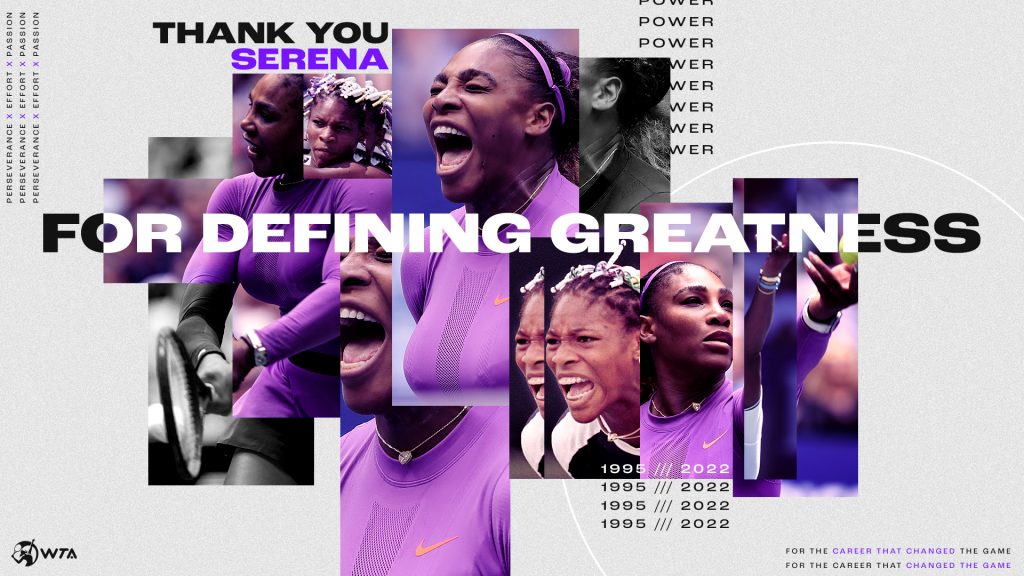 Additionally, Olympic triumphs make Williams the only player – female or male – to achieve a ‘Career Golden Slam’ by winning the singles and doubles at all four majors at some point, as well as gold medals in both singles (2012 London) and doubles (2000 Sydney, 2008 Beijing and 2012 London, all w/V.Williams).

“Congratulations to Serena on her historic career in tennis,” said Steve Simon, WTA Chairman and CEO. “With her unmatched determination and drive to excellence, Serena became one of our sport’s greatest champions and captured the hearts of fans around the world. She will be greatly missed by the WTA family, but her legacy will inspire generations to come for what she has stood for and accomplished both on and off the court. We wish her every success and happiness as she embarks upon the next chapter of her life.”

Williams played her last Grand Slam final at the US Open, against Andreescu, in 2019 – 20 years after she defeated then-World No.1 Hingis for her first major at the 1999 US Open. Her last Grand Slam title came at the 2017 Australian Open, where she defeated Venus in the final while pregnant with her daughter, Olympia; no player of either gender has enjoyed success on the biggest stages over such a long period of time.

Following her third-round loss to Australia’s Ajla Tomljanovic at the US Open tonight, Williams steps away with a remarkable 858-156 career win-loss record (.846) – the fourth most singles wins in WTA history trailing only Navratilova (1442), Chris Evert (1309) and Graf (902). From her 81 Grand Slam appearances, she won a record 367 matches, ahead of Navratilova’s 306.

Click here to read more about the incredible career of Serena Williams.