Osaka to become the 26th player in history of the WTA to earn the No.1 ranking after winning her second Grand Slam title at the Australian Open
First player from Japan – man or woman – to reach the top singles ranking

ST PETERSBURG, FL, USA – The WTA (Women’s Tennis Association) announced today that Japan’s Naomi Osaka will become the new WTA World No.1 when the rankings are released on Monday, January 28.

By lifting her second career Grand Slam title at the Australian Open, Osaka is set to become the first Japanese player – man or woman – to achieve this historic milestone since computer rankings were introduced in 1975, and the 26th woman overall to hold the No.1 ranking. At 21 years, 104 days old, she will also become the youngest player to make her WTA World No.1 debut since Caroline Wozniacki who reached No.1 in 2010 at 20 years, 92 days old.

“I’m beyond excited to become the new WTA World No.1,” said Osaka. “I’ve always dreamt of being in this position and I am honored to be part of the elite group of players who have reached the No.1 ranking.”

After reaching the semifinals at the China Open (Beijing) last October, Osaka became the second Japanese woman to break into the WTA Top 5, following Kimiko Date who reached as high as World No.4 in November 1995.

This No.1 crowning achievement is the latest accolade in Osaka’s young career, having clinched her career first WTA title at the Premier Mandatory BNP Paribas Open (Indian Wells) in 2018. Following her US Open triumph in 2018 to win her first Grand Slam, she reached the final at the Toray Pan Pacific Open (Tokyo) and qualified for her first WTA Finals at the BNP Paribas WTA Finals Singapore presented by SC Global.

Osaka is currently riding a 14-match winning streak at the Grand Slams, lifting her maiden major trophy at the 2018 US Open and now her second consecutive at the 2019 Australian Open, becoming the first player to win back-to-back Grand Slams since Serena Williams (2014 US Open, 2015 Australian Open).

“To achieve the WTA World No.1 ranking is an incredible accomplishment and I would like to congratulate Naomi on realizing this so early in her career,” said WTA CEO and Chairman Steve Simon. “Naomi is an exemplary person both on and off the court who carries forth the virtues that the Chris Evert WTA World No.1 Trophy represents.”

At the start of this fortnight in Melbourne, 11 players had a chance at leaving with the No.1 ranking. Having defeated Petra Kvitova in Saturday’s final, Osaka ensures her ascension to the top spot and overtakes Romania’s Simona Halep who spent 48 consecutive weeks as World No.1 (64 weeks overall).

“Winning back-to-back Grand Slam tournaments is a rare and special achievement, and I’m thrilled these results have propelled Naomi to the top of the women’s game,” said Chris Evert, the first ever WTA World No.1. “Her exciting brand of tennis, coupled with the dignity she displays on and off court, is a winning combination that tennis fans really embrace. She is still so young, with so much potential to keep growing as No.1. I can’t wait to see what the future holds for her.”

Osaka will be presented with the newly named Chris Evert WTA World No.1 Trophy, the focal point of which is a silver “star-map” tennis ball that represents the tennis universe. All World No.1s, past and present, are depicted by a diamond in the sky, which represents each champion’s mark on the sport. 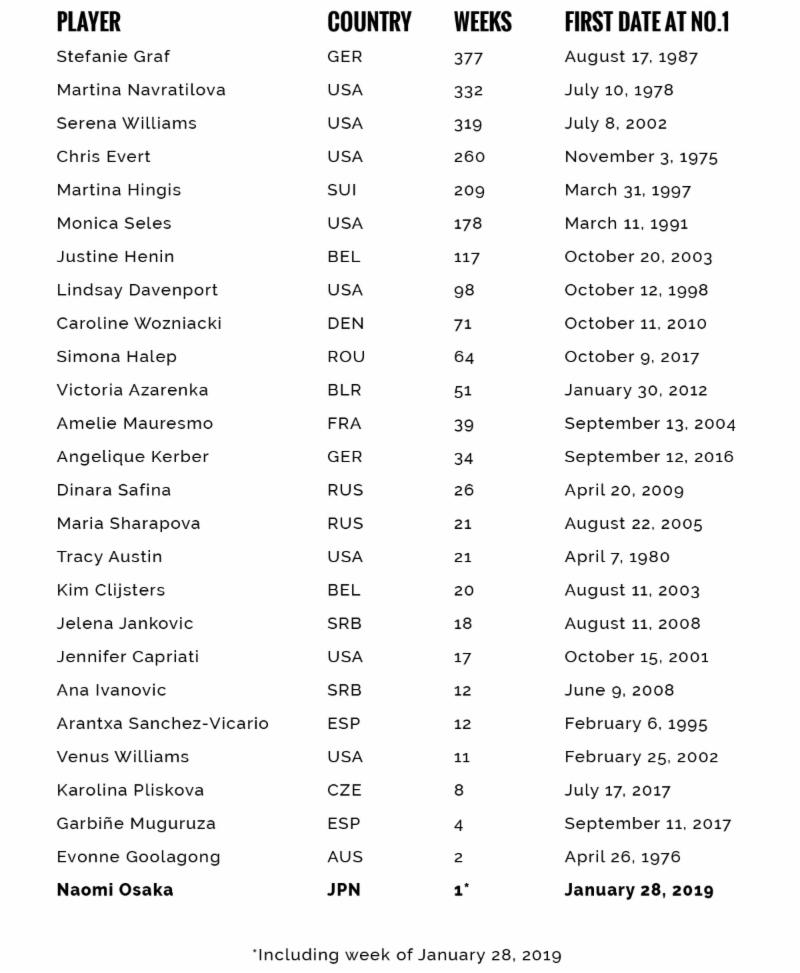