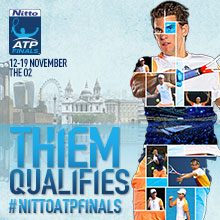 LONDON – Dominic Thiem has qualified for the Nitto ATP Finals, to be held 12-19 November at The O2 in London, for a second successive year as a result of Friday’s quarter-finals at the Shanghai Rolex Masters. Thiem, who is currently No. 4 in the Emirates ATP Race To London, joins Rafael Nadal, Roger Federer and Alexander Zverev in the 2017 field, leaving four places up for grabs with four weeks to go until the prestigious season-ending tournament.

“I am very proud to have qualified again this year,” said Thiem. “It is not easy to qualify once but even more so to repeat the following year. I look forward to competing with the best players in the world at The O2.”

The 24-year-old Thiem is the first Austrian singles player to qualify for multiple season finales since former World No. 1 Thomas Muster competed in the 1990, 1995-97 events. Last year at the Nitto ATP Finals, Thiem compiled a 1-2 record in round-robin group play.

Thiem, who is one of the most-travelled players on the ATP World Tour – competing in 24 tournaments in 2017 (46-23 match record), has lifted one trophy this year at the Rio Open presented by Claro in Rio de Janeiro (d. Carreno Busta) and has finished runner-up at the Mutua Madrid Open (l. to Nadal), an ATP World Tour Masters 1000 event, and at the Barcelona Open Banc Sabadell (l. to Nadal). Coached by Günter Bresnik, the right-hander compiled a 24-5 record in clay-court matches in 2017, also advancing to the semi-finals at Roland Garros for the second consecutive year (d. Djokovic in QFs, l. to Nadal) and at the Internazionali BNL d’Italia in Rome (d. Nadal in QFs, l. to Djokovic in SFs).

Three doubles teams — Jamie Murray and Bruno Soares, Ryan Harrison and Michael Venus, and Bob Bryan and Mike Bryan — also clinched their spots for the elite eight-doubles field after the conclusion of Friday’s play at the ATP World Tour Masters 1000 tournament in Shanghai. The pairs will join Henri Kontinen and John Peers, Lukas Kubot and Marcelo Melo, and 2015 champions Jean-Julien Rojer and Horia Tecau at The O2 in London next month. Two team spots remain up for grabs.

Murray and Soares have qualified as a team for the second successive year, while Roland Garros champions Harrison and Venus — who are currently No. 7 in the Emirates ATP Doubles Race To London — book their spot as they are guaranteed to be the highest-ranked Grand Slam titlists positioned at least between No. 8 to No. 20. The Bryan twins, who have captured the prestigious season finale crown on four occasions (2003-04, ’09, ’14), have secured their place for the 15th straight year (2003-17).