Defending US Open winner Stan Wawrinka announced today that he will miss the rest of 2017 with a knee injury. The three time Grand Slam winner shared the news on his Facebook page. 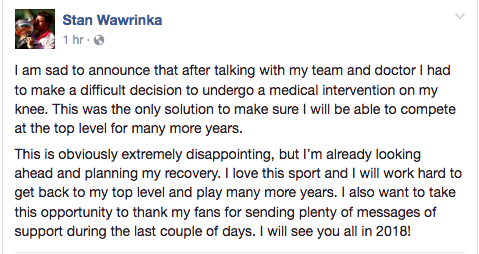 Wawrinka last played a tournament at Wimbledon, where he lost in the opening round. The Swiss star recorded a solid year on Tour, which included reaching the French Open final, winning the Geneva title, making the finals of Indian Wells and the semifinals of the Australian Open.