Fresh off of coaching Serena Williams to her record 23rd career Grand Slam title at the Australian Open, we recently sat down with world-renowned tennis coach Patrick Mouratoglou to gain some insight into what goes into working with the greatest athlete ever.

Known for his extensive knowledge of the game, Mouratoglou breaks down his thoughts on how Serena will progress throughout the rest of 2017, why he got into tennis, how the game will look in the future, and finally why his brand-new Mouratoglou Tennis Academy in the French Riviera is ready to change the sport forever.

1) First off, how proud are you of Serena for her recent victory at the Australian Open and where would you rank this win so far in her career?

Obviously, I am always proud of Serena when she wins a Grand Slam. For the fans, it sometimes seems easy for her to achieve these titles, but I can tell you that every Grand Slam is a long journey during which so many things happen that we have to take control of.

I know what’s required to make it happen, so I can’t be more proud of Serena when she wins one.

This 2017 Australian Open will always remain special because she beat Steffi Graf’s record of 22 Grand Slams, which was the Open Era record. Serena went through an incredible amount of pressure from all sides before winning this title since her US Open defeat.
More than anything, winning 23 Grand Slam titles is an incredible achievement.

2) How do you feel the rest of the year looks like for Team Serena? Are there any specific objectives for the remainder of 2017?

The season is long and there will be other goals this year. Every time we start a new year, I have the goal for Serena to win all four Grand Slams. It is a very difficult goal to set, but let’s continue to dream! I am lucky enough to coach a champion that has incredible abilities, so I think we have to set the bar high.

We decided to make a light schedule this year and put more effort on fitness and medical preparations. Last year she was injured too often. We want Serena to be well prepared when she starts a competition and be able to be at the top of her form for the most important events of the year.

Every time she enters a tournament, she plays to win, she wants to win, and we will go to each event with high motivation.

3) What’s the most important piece of advice you can give a champion like Serena before a big match?

I have always believed that whoever my player is, he or she would always benefit from a pre-match briefing. Of course, Serena knows how to compete and more than anyone how to win a tennis match. However, one of our goals when we started working together was to win more often and this has been achieved. One of the reasons why her winning percentage is higher—to me—is because of the talks we have before her matches.

These talks have several goals. First, I give her all the necessary information regarding her opponent: from her height to her style of game, to her strengths and weaknesses and her patterns of play. Once I finish my briefing, Serena closes her eyes and pictures exactly how her opponent will play. Then I propose to her some tactical plans for victory, taking into consideration both Serena’s strengths and her opponent’s weaknesses. Finally, I also talk to Serena in a way that we have the best chance that she would perform well. This is more the mental side of my explanation. All players have a state of excellence. It depends a lot on how the player thinks and feels and this is affected by a lot of things that we do not control. My role is to feel a players emotional state that day and counterbalance it as much as I can to bring them toward their highest standard.

When all this has been achieved, I consider that the chances of success are much higher than before our pre-match discussion.

I think tennis has totally changed during the last 10 years. The surfaces have become slower and this has become the norm throughout the year.

This decision from the International Federations has had two major effects:

First, the pure attacking players have disappeared and have been replaced by a new bread of player: Tall with a good serve, returns, great court coverage, retrieving many balls, good defense to offense and one who dictates but without making many unforced errors. Playing more high percentage tennis more than other styles.

Second, the average age of the players in the top 100 has increased a lot. As an example, there were nine players over 30 years old in the Australian Open main draw in 2000, whereas there were 46 of them in the 2017 tournament. It takes more time nowadays to reach the top 100, as you do not have any easy points. You need to work the rallies and understand the tactical side better because the points are longer and it takes more effort to work on your weaknesses and develop physical assets to cover the court well.

Unless the International Federations decide to move back on their decision, tennis will continue in this direction. All the players will have to be great defenders, move well around the court, and play percentage tennis: Aggression with minimal mistakes. They will continue to grow in terms of height because the serve is a major asset but with the necessity to move well enough. Players will step inside the court to take the ball early, and sneak into the net as often as they can. This is a good way to win a high percentage of points. 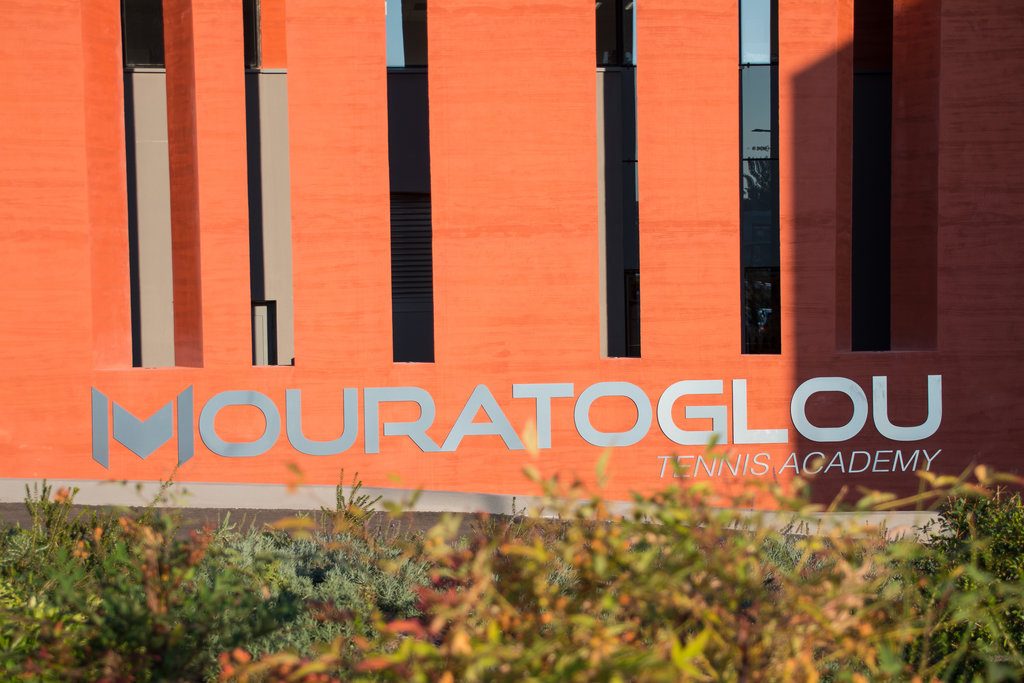 5) You recently opened up a brand new academy in the French Rivera. What was your motivation behind this great project?

Teaching young players, giving anyone who loves tennis the opportunity to live their passion has always been a goal of mine. I opened my first tennis Academy in 1996 in Paris.

When I was young, I dreamt of being a pro player and I had a good level of play but I could not achieve my goals because my parents made another choice for me. Now I know how valuable it is to have the chance to fulfill one’s potential. I’ve had the will to make this project happen for talented kids from any country.

The Mouratoglou Tennis Academy started to grow a lot and I decided two years ago to move it to the French Riviera to become the largest, most advanced and No. 1 tennis Academy in Europe. The Academy in Paris was becoming too small and the French Riviera is—to me—the best place in Europe to practice. We have a big international airport only 15 minutes away from the Academy and we play outdoors all year round thanks to the weather conditions. Ultimately, we built the most advanced tennis Academy in Europe, which is only 45 minutes by car from Monte Carlo.

6) With so many great academies out there around the world, what makes the Mouratoglou Tennis Academy one of the best in the business?

As I explained earlier, I believe that the location is important. We are 15 minutes from Nice, 15 minutes from Cannes, 45 minutes from Monte Carlo and one hour from St. Tropez by car. For those who come for one of our tennis camps, it is fantastic to be able to play tennis all day and go to the best restaurants or to the sea in the afternoon or evening.

Second, our infrastructure is impressive, modern and brand new:

– 34 tennis courts, which include eight indoor clay and hard-courts
– 4 paddle courts
– State of the art fitness center
– Four swimming pools
– A Medical Center
– A 4* Beachcomber Hotel on site with 150 rooms
– A Spa
– A Restaurant
– Accommodations for 300 players
– A school for 180 plus students

But the most important aspect of our business is our philosophy, the experience of our team, and the quality of the people we work with. We have been in the academy business for 20 years and have worked with more than 10,000 players, sent hundreds to American universities with scholarships, have had three junior world champions and brought more than 40 players into the top 100 of the ATP World Tour and WTA rankings.

We still have the same passion and love for our work as the first day we started. Ultimately, though, I am most proud and happy when people congratulate me on the quality of the coaching above anything else.

7) What would you describe as your single greatest interest point towards the sport? What drew you to tennis?

I loved tennis at first sight when I was five years old and started to hit a tennis ball. It has become my obsession every since and I know how lucky I am to work in my passion.
The other thing I love is to connect with people and to share things with them.

My job consists of helping people achieve their goals and their dreams in tennis. I couldn’t ask for anything else.

8) Can you tell us about the type of players who train at the Academy?

We have very different types of players who train at Mouratoglou Tennis Academy. First, we have 160 students that live on site, with full accommodations and have school, fitness and tennis training. They are aged between 11 and 18 and their goals are either to become professional tennis players, or to join American Universities with scholarships. We select our players both on the tennis and on the school side.

Then we have players who come for camps. The idea is to accommodate anyone who loves tennis any provide them with the opportunity to train in a professional academy with top coaches. These players can also access our camps all year long, regardless of age or level of play.

We also have a Country Club on site that is open to anyone who wants to play tennis or paddle or go to the gym. Families love to be members and come over the weekend.

Finally, we organize many events on site, including tennis tournaments: local, national and international ones. In 2017 we will host an under 12 ETA, an under 16 ETA and a men’s ATP Challenger. During these events, a lot of people come out and are happy and excited to watch some great tennis.

I wanted my Academy to be open to all tennis lovers from any age and any level.

9) Finally, what’s your greatest memory to date in your coaching or academy career?

I only have great memories and I don’t like to compare them. The excitement of witnessing a ten year old improve and reach their goals, or watching Serena lift another Grand Slam trophy brings me equal joy. In both cases, I am glad and it creates great memories because I receive incredible emotions from my players.

Ultimately, my greatest memory is the joy I’ve received from all the players I’ve worked with directly or through the Academy while reaching their goals.