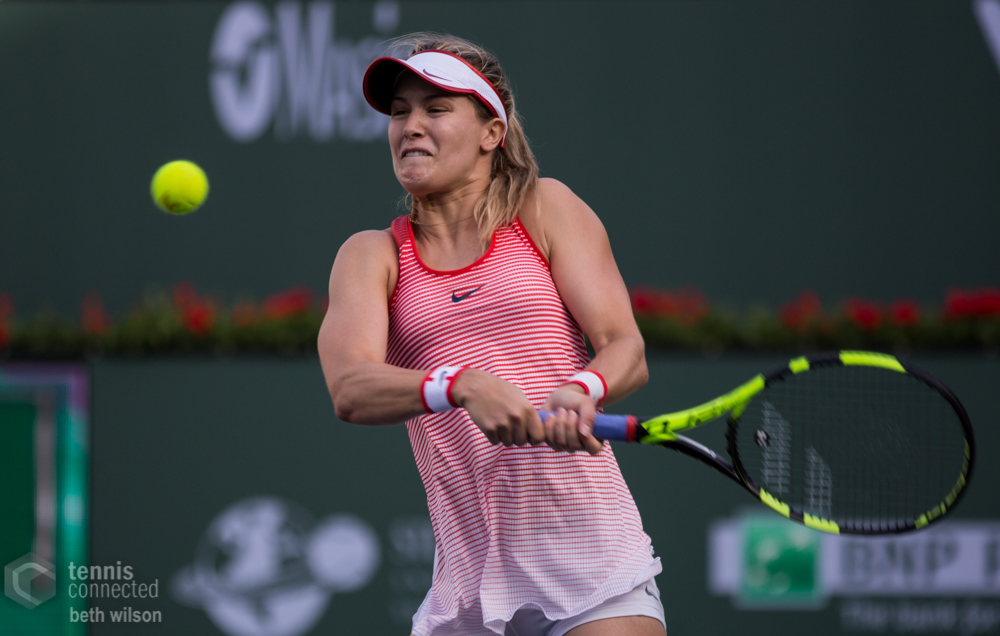 Welcome to Tennis Elbow, the column that looks back on the week that was in the world of tennis. This week, Charles Blouin-Gascon looks at everything surrounding Eugenie Bouchard.

The other day, we were sitting in the movie theatre waiting on whichever movie we were about to see and, bear with us here because we’re setting the scene, then the pre-show started.

You know the part right before your movie and the movie previews start, right? You get the nice little game of guessing which movie was, I don’t know, directed by James Cameron, and then you get a couple of commercials.

Well on that day at the movie, one of the commercials we got was the latest from Eugenie Bouchard’s partnership with Coca-Cola, one that started in 2014.

The commercial is actually pretty good, asking everyone to develop their very own Diet Coke bottle design. Cool, right? Right, but this latest campaign started a mere few days after this.

If you want a hotel where you can sleep, I would not recommend @HiltonQuebec pic.twitter.com/nWIYv6jiA4

Bouchard tweeted this, if you recall, just the night before she went to lose 6-2 and 6-3 in the second round against the No. 162-ranked Alla Kudryavtseva at the Coupe Banque Nationale.

The Challenger event in Quebec City, and by extension the greater public of the Quebec capital, were right there for the taking for Bouchard. She was in her home province, if not hometown, as the No. 1 seed and face of the tournament. A nice little run would have worked wonders both for the tournament organizers and for the player herself, as Bouchard could have used the boost of confidence that would have come with winning a second career title.

Bouchard could have use the boost in social capital as well because it’s been a crazy whirlwind for the 22-year-old since she first took the WTA Tour by storm in 2014. Over the past two years, well, she hasn’t always been the most beloved player. A win on home soil, well, that would have been great.

Instead, Bouchard flamed out, basically ran out of the court and left town without any post-match press conference of any sort after her loss.

She didn’t want to be there, not one extra minute; that was the message, and it’s one we certainly heard loud and clear. Because it’s Genie Bouchard, the entire episode was covered everywhere here in Quebec because everything she does always is.

This early exit is the latest in a downward spiral for the Canadian, who’s made headlines recently for her lawsuit against the USTA right in the thick of things at the US Open and perhaps a family saga that really, if we’re entirely honest, is none of our damn business.

Bouchard is now ranked No. 51 in the world, which really isn’t all that bad. If we look strictly at her numbers, she has played pretty well in 2016, especially coming after the nightmarish 2015 season. This year, Bouchard has won 31 matches and lost 22 and amassed a cool $541,183 in prize money.

This, really, is actually pretty good. It’s possible this is the new reality for Bouchard, who will settle into life as a pretty good, not excellent tour player. It would be a far cry from the meteor who dominated women’s tennis out of the blue in 2014, sure, but whatever.

Along with a relative uptick in results, Bouchard’s sponsorships have started again this year. Where she mostly focused on her tennis results during the disastrous 2015 season, she’s picked things up again in 2016.

As evidenced by this recent Coca-Cola commercial we saw at the movie theatre, and another one with Colgate.

This is probably the key, here. Win or lose on the tennis courts, Bouchard just might as well take advantage of all the opportunities that have come her way: because no lasting success is guaranteed.