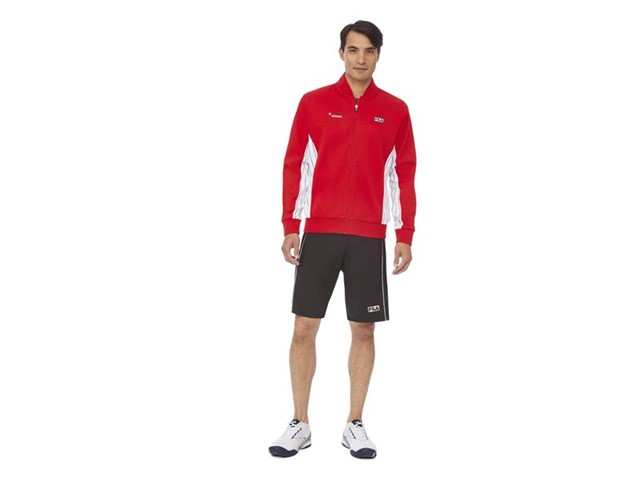 It was announced earlier this year, that FILA would serve as the Official Athletic Apparel and Footwear partner of Tennis Canada. As part of the multi-year deal, FILA will outfit the officials, ball crew, staff and volunteers at Rogers Cup presented by National Bank in Toronto and Montreal, beginning on July 23. FILA worked with Tennis Canada on the custom uniform designs, which were inspired by the company’s vast tennis archives, taking cues from the iconic 1970’s FILA “White Line” collection.

“Together with Tennis Canada, we created uniforms that reflect FILA’s storied heritage in the sport and the brand’s commitment to performance and style,” said Danny Lieberman, Senior Vice President of Apparel at FILA North America. “We are excited to offer a replica collection as well, giving fans of the game an opportunity to wear the same designs as seen throughout the tournament.”

The on-court fashions for the ball crew and officials feature a color palette of red and black, meant to pay homage to the traditional hues associated with Tennis Canada. FILA and Tennis Canada developed designs that boast a youthful vibe for the ball crew, with styles that can easily transition off-court. The ball girls will be outfitted in a red pique polo dress that fuses performance fabrics with a lifestyle look. The contrast chest stripe on the dress mirrors the design of the ball boy crew shirt, which will be paired with black shorts. Rounding out this group is the ball crew hoody in red, also featuring the contrast chest stripe in addition to a side slit pocket and a quarter zipper.

The Rogers Cup officials will take the court clad in a red polo shirt and black shorts, each embellished with white piping. The focal piece of the entire collection is the officials’ jacket, which offers a modern spin on the legendary look of the FILA Settanta jacket. The design features rib knit details at the collar, hem and cuff, and pinstripe accents on the side panels and under the arms.

To create a bold statement off the court, FILA and Tennis Canada utilized the colorway of title sponsor Rogers’ corporate branding. Highlighted by a blue radiance hue, the full collection consists of four silhouettes of tops, including a v-neck, crew, and polo shirt, as well as a half-zip hoody. This marks one of the first times that a bright color has been used off the court for the tournament staff and volunteers.

“We are thrilled with the uniforms that all of our on-court and off-court officials and volunteers will be wearing this year,” said Rob Swann, Vice-President, Chief Commercial Officer. “The partnership and collaboration with FILA has been tremendous and we think this apparel will stand out, make a statement and be extremely popular with our stakeholders and fans.”

Hats and visors were also created to complement the apparel and coordinate back to each uniform collection. All items for the officials, ball crew, staff and volunteers are embellished with the FILA and Rogers Cup logos.

Select replica uniform styles will be available on-site at each event, as well as at retail at Sporting Life in Toronto and Tennis Zon in Montreal.