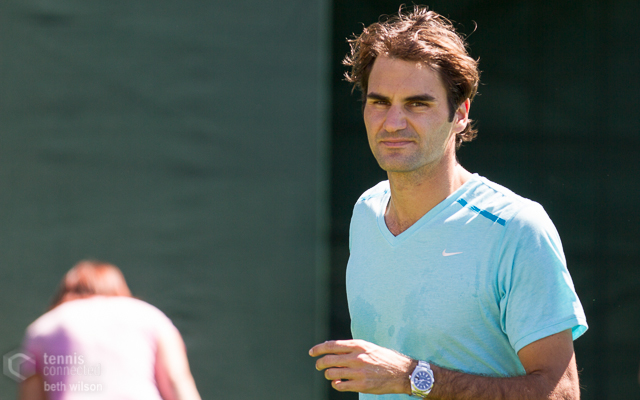 Welcome to Tennis Elbow, the column that looks back on the week that was in the world of tennis. This week, Charles Blouin-Gascon recaps the first day of action in England.

Well at least now, all British eyes will be on Wimbledon—correct?

Alright, they always, always are. But still. On a day where the Brits shamefully (as they tend to do) bowed out of an international soccer competition, this time losing against the mighty nation of Island in the Euro 2016 knockout stage, Wimbledon 2016 got underway.

And while England’s eyes may have a bigger appetite than what its stomach can muster on a football pitch, it’s an entirely different story at Wimbledon. Because year after year, there is no more important show in tennis than what unfolds during these weeks at the All-England Lawn Tennis and Croquet Club.

Long-time readers know that I’ve never shied away from criticizing the tournament that I’ve dubbed the Cathedral of tennis, poking fun at how much Wimbledon believes in the myth of Wimbledon—but in that battle I’m fairly alone.

I may say that the Cathedral needs to adapt to continue thriving, but my voice pales in comparison to that of, say, Novak Djokovic (et tu, Novak?). “It is going to be the first match on the untouched grass,” the Serb said ahead of his first-round match. “That’s probably one of the most special tennis matches that you get to experience as a professional tennis player.”

Who cares about a match on untouched grass? Well at Wimbledon, everyone does care about it because this untouched grass was presumably blessed by the tennis Gods, or at the very least Princess Kate I guess, or someone else, or whatever it’s Wimbledon okay?!

So anyway, Wimbledon has started with Djokovic barely breaking a sweat in a straight sets win.

Tennis’s most eminent star Roger Federer also played his first match but we’ll get to him in a minute. For now, let’s mention that the first day of action at Wimbledon had a little bit of everything for everyone. There was, as we’ve covered above, the reigning champion and current best player in the world. There was the ex-Grand Slam winner (though elsewhere) who managed to give one more crowning achievement to her career.

There was the ex-young promising player, who hasn’t really shown much promise of late and who couldn’t quite catch magic in her home country.

Laura Robson falls 6-2, 6-2 to Kerber, and now her road back gets much tougher: she’s out of protected rankings, sits at #283. #Wimbledon

There was the old veteran who managed to win a marathon match in which, and this is a joke, the longest point probably lasted all of four strokes.

Great win for Sam Querrey. After dropping first two sets in very close TBs, he battles back to win 12-10 in the 5th over Rosol. #Wimbledon — Dawn Rhodes (@rhodes_dawn) June 27, 2016

There was also the qualifier who managed quite a huge win on this opening day.

Looking ahead to day two, here’s what we know. On day two, we know that Serena Williams will make her debut against Amra Sadikovic. Will this Wimbledon finally be her calling card at the 2016 majors? We also know that women will be front and center at the main courts, and that this is a good thing.

If we look just slightly ahead beyond the second day of action, you’ll notice one storyline—both for its sheer unlikelihood as well as because it opposes the monarch of the sport.

Federer on 772d-ranked Marcus Willis, his next opponent: “I think its one of the best stories in a long time in our sport”

That’s right: for his second match at Wimbledon, Federer will battle Marcus Willis, the 772nd-ranked player in the world.

Marcus Willis has won 7 #Wimbledon matches (3 pre-quals, 3 quals, 1 today), which often wins you the trophy. It wins him a match vs Federer. — Ben Rothenberg (@BenRothenberg) June 27, 2016

If we may interject here: to some, a match against Federer may be an even bigger and better trophy than the one you get for winning Wimbledon.