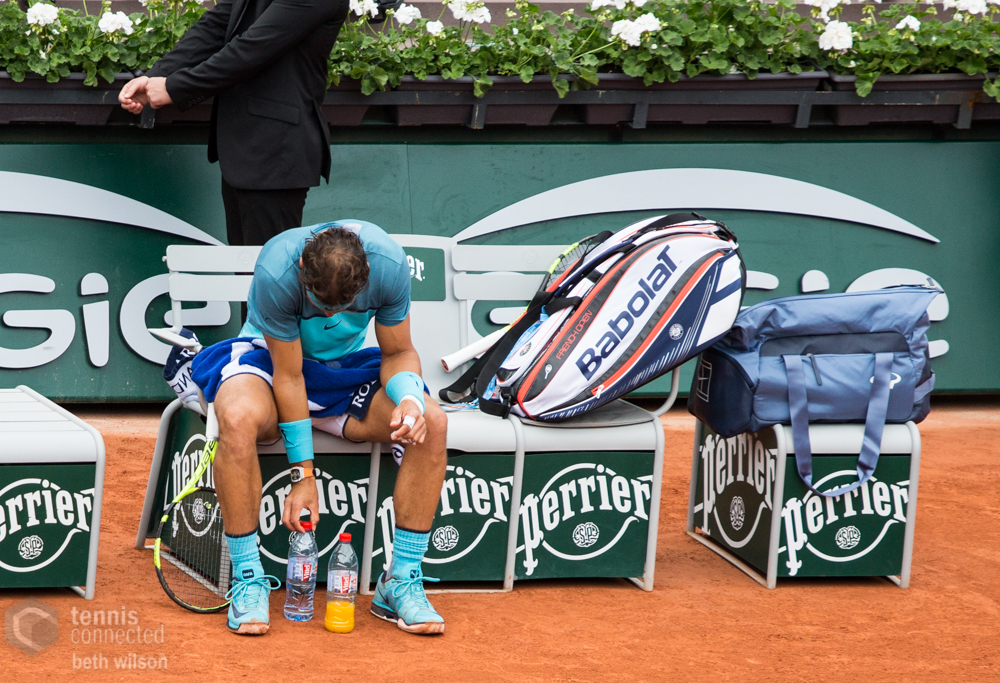 Welcome to Tennis Elbow, the column that looks back on the week that was in the world of tennis. This week, Charles Blouin-Gascon recaps the first week of the 2016 French Open and looks ahead at the second.

A week ago, we said that the 2016 French Open seemed destined to become one of the better ones in recent memory.

Well we were wrong on it being “better”: a French Open that lacks the people’s champ in Roger Federer AND the best clay court player ever in Rafael Nadal can’t be “better” in any sort of way.

But we were right on the nose in predicting that it would indeed be memorable.

While we’ve had over a week to process the Swiss’s absence—maybe we’ll just need to start acknowledging that he’s an old man now?—Nadal’s withdrawal stings a whole lot right now.

Consider that this is the first time in the Spaniard’s career that he withdraws from a Grand Slam event he has entered, and that it comes at the French Open, the tournament he has traditionally owned.

Life comes at you fast, and now’s probably as good a time as any to think about a tennis world where neither Nadal nor Federer is as relevant as they have been.

Let’s see, what else did we get over the first week at Roland Garros?

Hmm, well we know that Milos Raonic, though he was very much still in the running when it was announced (i.e. the Canadian has since lost 2-6, 4-6 and 4-6 against unseeded Albert Ramos-Vinola), will add the great John McEnroe to his coaching staff for the grass season.

'Milos has a great team with Ricardo Piatti and Carlos Moya. I'm going to be a consultant on the grass. I'm excited'. McEnroe (Eurosport)

Raonic is probably one of a select few players capable of winning Wimbledon, and his hope has to be that the presence of McEnroe can help make the difference in a tight match.

Oh, there was also tennis played this week in Paris and, as usual at the French Open, it was excellent; perhaps none as crazy as this point between Barbora Strycova and Agnieszka Radwanska.

The most fun point of the year, from Barbora Strycova and Agnieszka Radwanska. #RG16: https://t.co/MOzJshp5ZZ

As for what lies ahead, all eyes will be on the likely two favourites, Serena Williams and Novak Djokovic.

For the former, this French Open is a chance to fully sink her teeth into this 2016 season, where she still has only one title to her name. She’s won a bunch of matches, as she typically always has, sure, but Serena Williams is known for winning tournaments. Better yet, she’s known for winning major tournaments: of her 70 career titles, a full 30 per cent have occurred at Grand Slams.

Williams very well may add a 22nd major title this week in Paris, as she’s yet to truly be bothered in winning her three first matches in straight sets. She’d take it.

Meanwhile, Djokovic will hope to make history at the end of this week by winning his first French Open title, thereby completing the career Grand Slam. It’s become harder and harder to ever doubt his credentials, but possessing at least one title at each Grand Slam would forever etch his name in tennis lore. If ever there remained doubt whether he belonged alongside Federer’s and Nadal’s names, this win would fix everything—and possibly push him over the top.

Djokovic is odds-on favorite to win the French Open. Murray is a distant second; Wawrinka a really distant third https://t.co/SFAvGs6qyK

And with the withdrawal of his two chief rivals, Djokovic has as good a chance to win Roland Garros as he ever has.

The folks at FiveThirtyEight believe Djokovic would already two French Opens if not for Nadal. Let’s go get the first one.