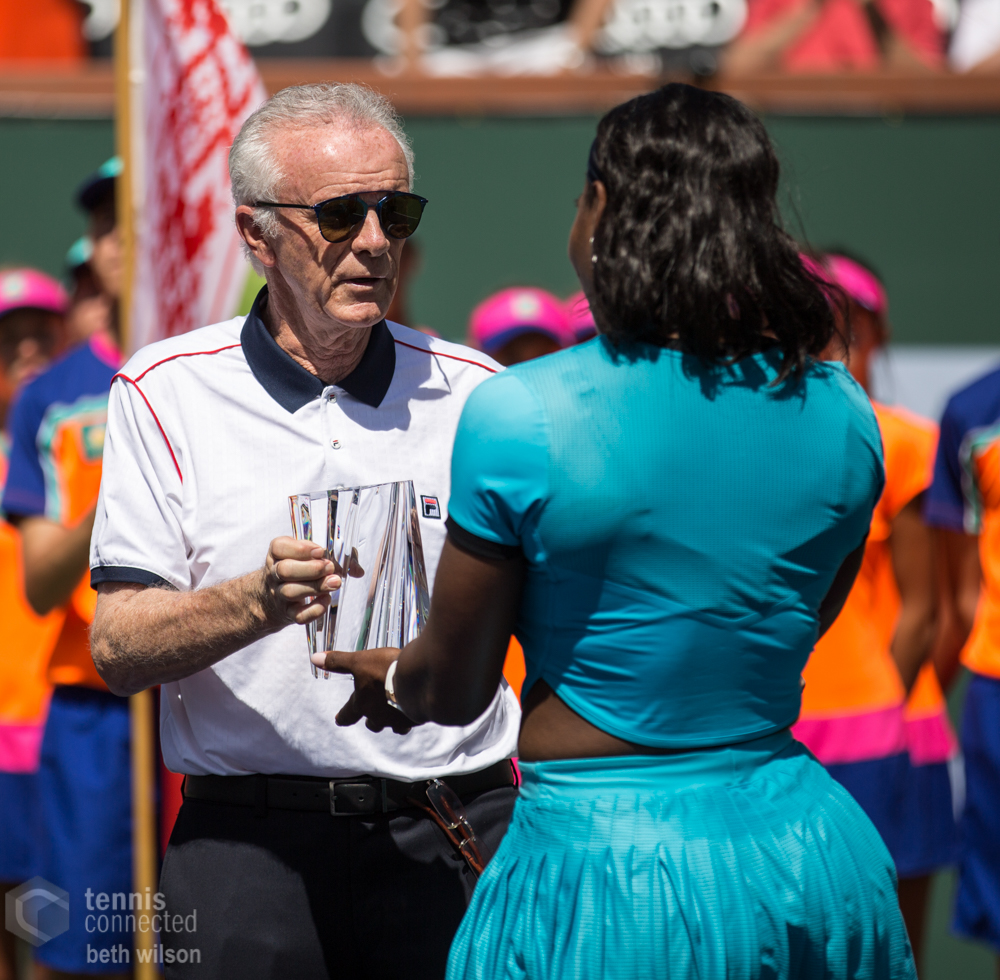 Welcome to Tennis Elbow, the column that looks back on the week that was in the world of tennis. This week, Charles Blouin-Gascon discusses sexism in tennis.

Tennis has a sexism problem.

It’s not exactly news because we’ve all known about it, but it’s dominated headlines over the past week when four of the sport’s key figures—or rather, three of them, plus an ex-tournament CEO—ventured into some thoughts about women in tennis.

Raymond Moore, still then the CEO of Indian Wells Tennis Garden where the BNP Paribas Open was hosted, first went down that well with some remarks that ended up costing him his cushy seat at the big table. Here, we’ll remind you.

Indian Wells CEO Raymond Moore's remarks this morning not likely to delight the WTA, its players, or fans: pic.twitter.com/56zSV0SK2X

What do you think; pretty wild, right? We’ll underline the point where Mr. Moore says women players should get on their knees and thank God, and where he calls the next generation of WTA players “physically attractive and competitively attractive.”

We knew you were an old white man, Raymond, but you didn’t need to spell it out so clearly for us!

That was at the 2016 BNP Paribas Open, a tournament which Novak Djokovic won. After the final, reporters asked the Serb to comment on Mr. Moore’s remarks and, well, just see for yourself.

There’s an opinion there—that men and women maybe shouldn’t get equal prize and should fight for what they deserve separately; it’s not a particularly good one, but still a relatively coherent one from Djokovic. Then, the Serb veers into weird territory.

“I have great admiration and respect for them to be able to fight on such a high level. Many of them have to sacrifice for certain periods of time, the family time or decisions that they make on their own bodies in order to play tennis and play professional sport.”

We’ll marvel at Djokovic’s brilliance and say that, yes by God men tennis players do incredible things on a tennis court. Just look at this brilliance.

That’s the good stuff and why you deserve the big bucks, Novak, right?

In all seriousness, Djokovic’s remarks weren’t especially surprising because the trope of men believing they are better, or deserve better, than their female counterparts isn’t new.

Have you seen enough? No, no there are more; read on. Here’s Sergiy Stakhovsky saying that, “almost every other player is a lesbian” and showing his homophobic side all at once. Here’s Jo-Wilfried Tsonga saying women “are more unstable emotionally than us.” Here’s Marinko Matosevic saying he could never hire a woman for head coach.

Also? Also, this: all of them basically dumber than a sack of potatoes. (For more from this author, read this.)

Here’s where we mention that at this same Indian Wells event, Serena Williams was asked about Mr. Moore’s remarks and that she basically ether’d him.

But that was to be expected, right? Since Moore essentially called her out, Williams responded in kind, not to mention that she’s worked so hard on this issue of equal rights throughout her career (random exhibit here).

Also expected, though maybe not at first glance, was Andy Murray’s foray into the limelight on this issue. “Men’s tennis has been lucky over the last nine or 10 years with the players they’ve had, the rivalries which have come out of that. That’s great but the whole of tennis should capitalize on that – not just the men’s game,” he said. “I think there should be equal pay, 100 per cent, at all combined events…I think it will happen one day.”

Essentially, that’s what we believe in, too: equality between men and women in every regard for equal accomplishments. By winning the 2015 Miami Open, both Djokovic and Serena Williams pocketed $900,400; that’s good. By winning the 2016 BNP Paribas Open, the Serb added a nice $1,028,300 and Victoria Azarenka, $1,028,300; that too is good.

Both of those are good, yes, but they hide deeper problems. They hide the fact that overall and outside of joint events like the BNP Paribas Open, the Miami Open and the four Grand Slams; outside of these, players “on the WTA Tour earn 76 cents on the ATP’s dollar.”

Here’s where you’ll counter that well, nope the ATP and WTA do not have joint events every single week. Of course not, it wouldn’t be feasible. But maybe that’s something that the International Tennis Federation should look into: tournaments are already categorized in both men’s and women’s tennis according to their prestige and their strength. The ATP has Masters 1000’s while the WTA Premier Mandatory events, and so on.

If you feel like they need to play the same number of sets, or whatever, then sure change that. But give both men and women the same prize money for accomplishing the same things.

Then let players distinguish themselves through spokesperson gigs, sponsors, and the likes.

Otherwise, yep: equality in every regard.