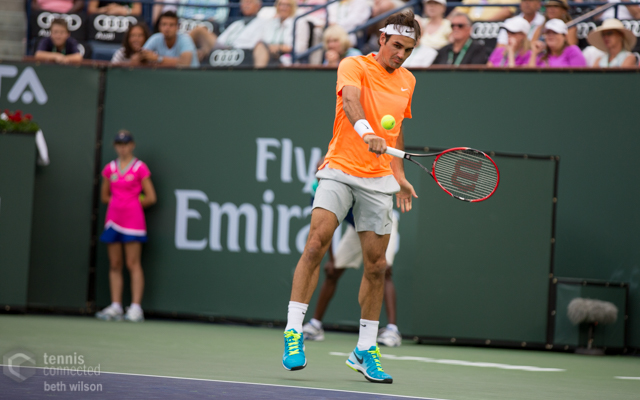 Welcome to Tennis Elbow, the column that looks back on the week that was in the world of tennis. This week, Charles Blouin-Gascon recaps the latest happenings in Ferederland.

The offseason is an oxymoron.

There is no time off in tennis, no matter what the calendar says: how are you going to prepare for the new season if you’re not going to do it when you don’t play any matches? There’s no time off, only time to be proactive and productive.

Roger Federer, at 34 years old, has understood that and, this past week, announced three legitimately important decisions; he keeps busy even when he doesn’t play. Let’s start with the most recent one, shall we?

Here is my tentative 2016 schedule. Happy holidays and thanks for all your support! ????????? pic.twitter.com/b3TtZCmYQh

Alright, that seems pretty straightforward, right? The King announces his playing schedule for 2016—except, isn’t he the only one who does so? Are other players similarly as selective in the tournaments they do and do not enter?

But wait, there’s more. What seems at first clear cut, with 16 selected tournaments, is actually a little muddy: there are the four Grand Slams, sure, but only five of the nine Masters 1000 events. How can Federer do that? Well, he’s earned the right to do it.

People wondering how Federer can get away with plan to skip 4 Masters 1000 events next year: he's earned it pic.twitter.com/oGpXhSzDI1

Federer can skip one Masters 1000 event with no penalty for each of the following reasons: 1) having played 600 matches, 2) having accumulated 12 years of service on the ATP World Tour, 3) being over 31 years old and 4) all of the above.

A schedule like this one has the benefit of letting the player maximize his chances for a maximum of points every time he enters a tournament; it’s an underrated part of Federer’s longevity. It sure pays to be King, yes.

You’ll notice that among the events the Swiss has added to his schedule are the 2016 Rio Olympics. Surely, he’ll look to add that elusive gold olympic singles medal, one of the (very few) prizes that has eluded throughout his career.

But that’s not all he’ll play for.

Rollback the years with @mhingis. Really excited to be playing mixed doubles with you 15yrs later at the Rio games pic.twitter.com/IgOGEPLleu

Indeed, Federer will compete in mixed doubles in Brazil next year with fellow Swiss Martina Hingis.

It’s an interesting choice, if for no other reason than the contrast that exists between the two: King Roger remains perhaps more universally beloved than any other athlete in the world while Hingis is much more reviled.

Because, you see, after she became the youngest ever Grand Slam champion and the youngest ever World No. 1, after she spent 209 weeks atop the WTA Tour, after she retired in 2002 at the age of 22, came back and climbed as high as No. 6 in 2006, after all that, Hingis retired a second time after injuries and, mostly, a positive test for cocaine in 2007.

By then, long gone was the tennis prodigy, the one who predated the Serena Williams era, who relied on smarts, touch, feel, instincts and IQ perhaps more than anyone ever had. The Williams sisters had introduced power to the women’s game and Hingis couldn’t quite keep up, but it doesn’t take away from her genius when she first arrived.

By 2007, her reputation had been shattered and she went away for six long years, giving everyone long enough to forget about what she had done. She came back in 2013 and Hingis seems, well, better and more at peace now. Always an excellent doubles player, Hingis and Federer are probably favourites for the 2016 mixed doubles tournament in Rio.

Let’s finish with the very first of the three news items (in chronological order), the announcement that Federer would replace Stefan Edberg with Ivan Ljubicic on the Swiss’s coaching team for 2016. The Croatian and former World No. 3, last seen helping Canadian Milos Raonic become a regular in the ATP World Tour Top 10, will likely be judged strictly on whether Federer wins the Rio gold medal next season.

You know, no pressure.