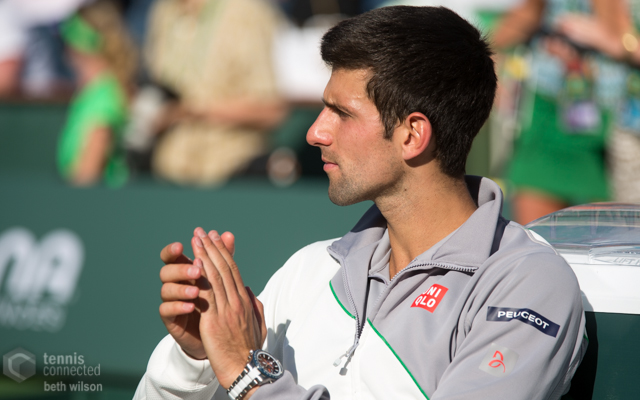 Welcome to Tennis Elbow, the column that looks back on the week that was in the world of tennis. This week, Charles Blouin-Gascon recaps the 2015 Barclays ATP World Tour Finals in London.

Novak Djokovic has been so good this season that he has even won the WTA Finals. Look, it says so right here.

Djokovic is so good, he’s winning the WTA Finals too. https://t.co/YLskPRYZwn

Alright, these types of mistakes happen to everyone and shame on me, perhaps, for pointing my big fat finger right at it. I know. Whatever.

For the fourth year in a row, Djokovic won the Finals of the ATP, not the WTA, of course—or the Barclays ATP World Tour Finals if you’d like to call it by its full and proper name. He beat Roger Federer in the final once more, this time by the score of 6-3 and 6-4 in 80 minutes. In winning this match, he avenged his loss against the Swiss in the round robin. (More on that one in a minute.)

With the win, the Serb finishes his finest season yet. “It’s been an incredible season,» Djokovic said after his win. «Obviously, sitting here with this trophy alongside me, I couldn’t ask for a better finish to the season. The last four years I managed to win the (Barclays ATP) World Tour Finals, where the best players in the world are playing. For some reason or another, I’ve been playing some of my best tennis after the US Open, in Asia and also indoors, both Paris and London.»

How great was he in 2015? He finishes the year with an 82-6 record, including 27-1 at the four Grand Slams, something like $19 million in prize money and 11 titles, three of which came at the Australian Open, Wimbledon and the US Open. These World Tour Finals were the 15th straight final he had reached at the Tour Finals, Grand Slams or Masters 1000 he participated in. Of the 15, he’s won 12 times.

If it seems like Djokovic is utterly alone at the top right now, it’s because he truly is. (And also because we’ve mentioned it just two weeks ago after another Masters 1000 title, this one in Paris.)

We could continue on and on on that front for a long while, so let’s just go ahead and do it: this win in the Tour Finals against Federer was his 23rd in his rivalry in 45 matches against the greatest player of all time. He also has a 23-23 record against Rafael Nadal, supposedly the best ever on clay and one of the five or so best in history. For his career, Djokovic is up to 686 wins and only 146 losses (including 45 against just Federer and Nadal), and 59 titles.

He’s still just 28 years old and should continue to add to these totals for a few years, both because he continues to excel and because his main rivals keep getting worse.

And through it all, what I’ll remember most from these Tour Finals is the pseudo controversy Djokovic created after his round robin loss to Federer.  “I made a lot of, lot of unforced errors. I just handed him the win, especially in the second set,» he said after losing the match. “He tactically played well. Undoubtedly, he was the better player on the court. But I think I also allowed him to play and penetrate through the ball and dictate the tempo from the baseline.”

This being the gentlemanly sport of tennis, Federer didn’t take too kindly to Djokovic’s comments on the match. “He handed [me] the win? Well, he wasn’t as good as in the first set. But I feel, honestly, with the way he’s played this season, you still have to put him away,» he said. “It’s not an easy thing to do. It’s not like he played terrible. I know he can play better. Why did he play that way? I’d like to give myself credit for that, quite honestly, yeah.”

Welcome to tennis, where any comment that isn’t overly complimenting of your opponent will be perceived as a slight.