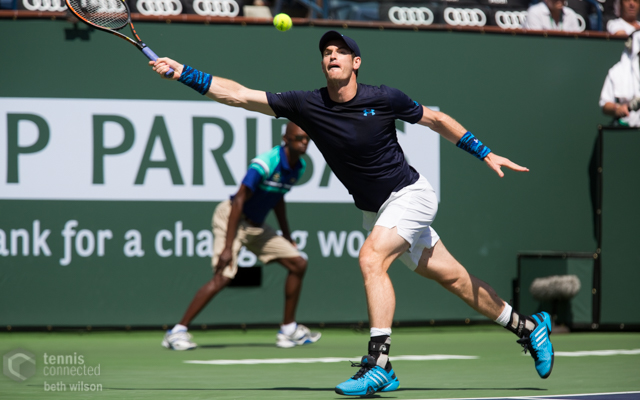 Novak Djokovic and Andy Murray played tennis at the Rogers Cup in the first men’s final with the top two seeds since 2004 Cup and the match-up lived up to the billing.

Judging from the way they played in the Rogers Cup final, you wouldn’t think that Novak Djokovic had beaten Andy Murray eight times in a row.

That’s not to say that the Brit was dominant and coasted to an easy win, but rather that it seems odd that their rivalry had been so one-sided recently. Because on Aug. 16, on the final Sunday at the Rogers Cup, the two combined for a very competitive match: throughout, the point tally never veered much to the advantage of one or the other, and Murray had an 118-112 edge by the end. Murray made 60 per cent of his first serves and won 69 per cent of the points, Djokovic 60 per cent and 65 per cent of the points. He made five double faults to the Serb’s two.

Go through the list of statistics, and the match was close. And it was.

But Murray will remember the number one—as in, his first win against Djokovic in nine matches. Indeed, the Brit captured a third Rogers Cup title with a 6-4, 4-6 and 6-3 win over Djokovic. “It was tough. This time, both of us were dictating the points,” Murray told reporters after his win. “I tried to play aggressive today.”

It worked, especially at the turning point of the match. This turned out to be a marathon game in the third set, on Andy Murray’s serve, a game that lasted over 17 minutes and 50 seconds. Up 3-1, Murray managed to save six break points and to consolidate his hold on the match. “Most of all the moments when he needed to, he served very, very well,” Djokovic said in his post-match conference. “He just came up always with big serves, so I couldn’t do much.”

Murray was already guaranteed to overtake Roger Federer at No. 2 on the new edition of the ATP World Tour rankings simply for having made the final, but the win is the icing on the cake.

It’s also a boost for the Brit as the season fast forwards and hits the stretch run of the US Open series, with the big prize of the US Open as the carrot at the end of the road for the players on tour. “When we play each other, we always kind of take the best out of ourselves,” Djokovic said. “We need to deliver the best game possible in order to win. That’s what he did and I congratulate him.”

The loss reminds us all that Djokovic is but a mortal and brings his record in 2015 to a mere 52-4, including a gaudy 18-3 against members of the Top 10. “I know people always expect me to do well,” Djokovic said, “but I try to be modest with my expectations.”

Whoever told you that losses can be good for you was lying because you actually can’t win for losing, but to the extent that a loss can be constructive, perhaps this one qualifies for Djokovic. The Serb had been cruising along, having won the previous five Masters 1000 events he competed in, riding a 30-match win streak, and another two Grand Slams. “You never like losing but any streak comes to an end,” Djokovic said. “Again, I lost to a better player today.”

Djokovic’s level has been much better than more or less everyone else on tour, but he’ll remember this Rogers Cup for the fact that he did improve. “I played better as the tournament progressed,” Djokovic explained. “I did fight until the last point and did try my best.”

That’s a positive, and that’s the thing about tennis if you’re Djokovic: more often than not you win, but sometimes you lose. Even in the finals.